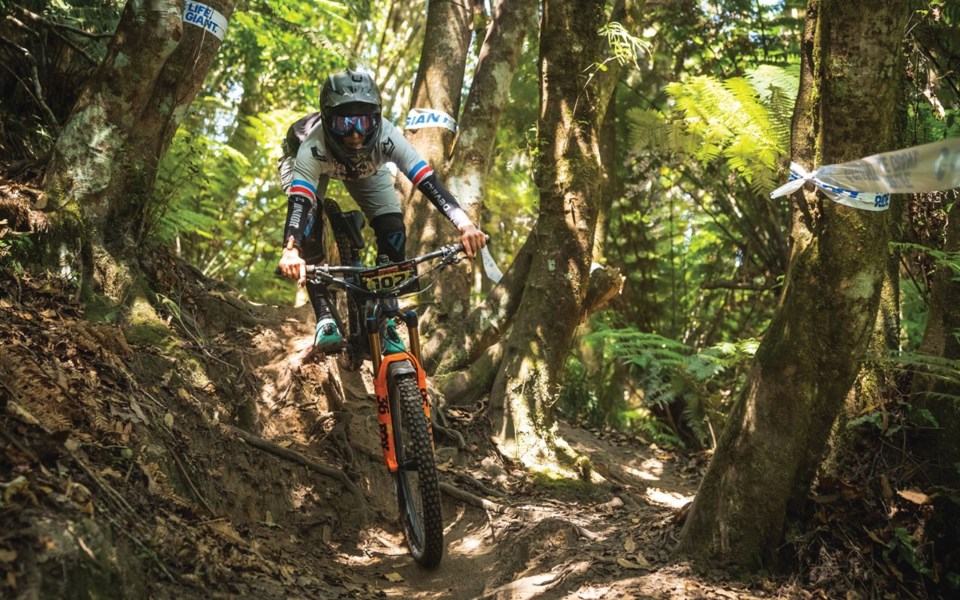 Georgia Astle had a strong start to 2020 at Crankworx Rotorua before the COVID-19 pandemic hit. <ParaStyle:CUTLINE Styles\:CUTLINE- credit>Photo By Kike Abelleira/Crankworx

Downhillers Georgia Astle and Lucas Cruz were both looking for big things in their respective 2020 seasons.

For Whistler's Astle, she was committing to chasing the Queen of Crankworx crown in a big way while Pemberton's Cruz was set to make his UCI World Cup elite men's debut this year.

The pursuit for both is on hold for now.

Astle at least was able to start her journey, with the first Crankworx event of the season taking place in Rotorua, New Zealand in early March. There, she pulled off a third-place finish in the Giant Toa Enduro and a sixth-place showing in the Crankworx Rotorua Downhill as she sits 12th in the overall standings.

Shortly after returning from New Zealand, though, the world started taking precautions related to COVID-19 and all of Astle's work commitments started vanishing.

"I have been able to do really chill rides and stay fit from it," said the Unior Devinci Factory Racing Team rider. "It's a bit weird thinking that the season is over before it kinda started, but the whole world is in the same situation."

Astle said she's been riding her mountain bike on the road, and was doing some solo rides in Pemberton for a little while early on before the recommendations to stay in one's own community came into place.

"The hardest part about an offseason is that fact that I don't get to ride my bike consistently, so I lose that fire," she said. "If I'm just riding rocks and roots, it just keeps my mind busy, which is great."

The 22-year-old said while she's in a good state of mind, it's tough to plan for the future with the schedule and other goalposts constantly changing and shifting. Crankworx Innsbruck and some Enduro World Series races have already been bumped into the fall, while others are in jeopardy.

"You can't really make any other commitments not knowing when you're going to have races," she said. "If that happens, then great, it's just an extended season, but otherwise, it hops into a whole other year. The season will just carry on a bit longer, which is always hard for future plans."

Astle said much of her income comes from performance bonuses, while her other employment is based on selling bikes and bike parts, where there's little demand these days.

"I'm lucky enough that I'm in a place where I can still save money and pay rent, so I'm not too worried about it, but it is a bit of a shame that I won't be able to save up a lot of money like I usually get to," she said. "I'm just going to be scraping by."

Cruz, meanwhile, was eager to make his elite debut on March 22 at Lousa, Portugal, but lost that opportunity at the last minute.

"It was a bit hard to take at first. I was fully ready to go—bags were packed and everything—to leave to the first World Cup in Portugal, but the day before that, we called it off," he said. "It was a huge build-up and then no racing at all. It was definitely a weird feeling.

"I've moved past that and I'm still training hard and everything. But it's definitely very weird."

While several dates have been postponed or cancelled, some are staying in place, at least for now. The next untouched date is the World Championships in Leogang, Austria in early September.

In his first year with the Norco Factory Team, Cruz is itching to get racing and post some results for the brass.

"Being my first year in elite and being on a new team, I was hoping to get some good time in with them before we race, but I'm just trying to stay motivated and ready for when the time comes," he said.

With space on the family homestead, Cruz doesn't have to leave home to stay active, as the barn is now a makeshift gym and, with help from Joyride Bike Parks, he has constructed a pump track and dirt jump. In addition to staying fit, he's embracing the chance to ride and train alongside his younger brothers.

"I have all the gym equipment I need and nothing I don't," he said. "We have a full-on pump track now, and a dirt jump, so we spend tons of time at home and never really leave."

If he does venture offsite to take on some of Pemberton's trails, Cruz said avoiding anything gnarly is at the forefront of his mind.

Though missing the chance to earn prize money, Cruz said the financial hit hasn't been significant at this point, as the team was set to cover his travel expenses this year.

"I've been saving up my money instead of spending it travelling everywhere," he said.