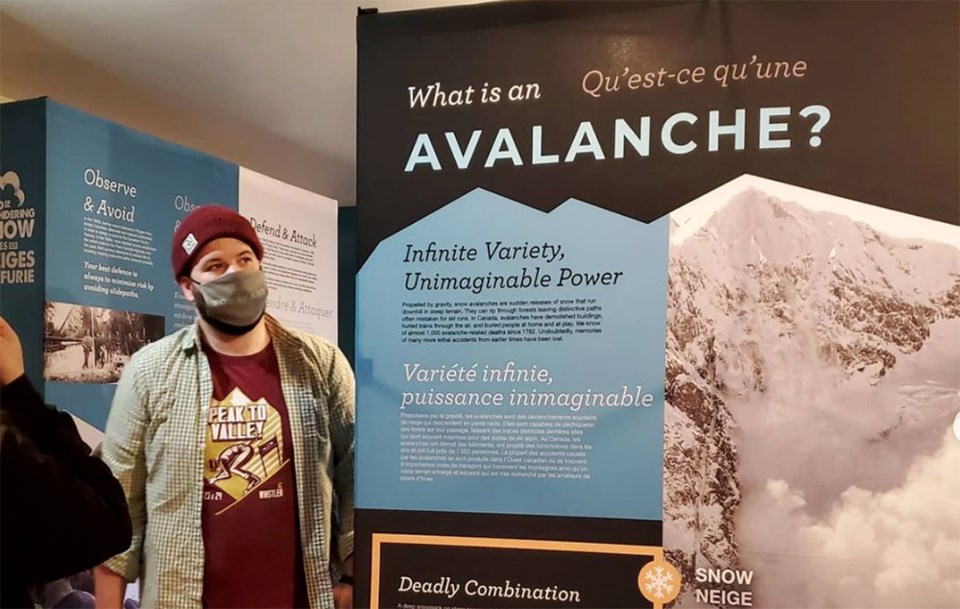 Whistler Museum's new Land of Thundering Snow exhibit, launched by the Revelstoke Museum and Archives in partnership with Parks Canada and Avalanche Canada in 2015, explores the history of snow research and avalanche safety in Canada. It runs until March 31, 2021.Instagram, @whistlermuseum

Today (Thursday, Dec. 17) we are very excited to be opening Land of Thundering Snow, the first travelling exhibit that the Whistler Museum has hosted since moving into our current building in 2009.

While Whistler will be the first museum to host the physical exhibit, Land of Thundering Snow began as a virtual exhibit launched by the Revelstoke Museum and Archives in partnership with Parks Canada and Avalanche Canada in 2015. The exhibit explores the history of snow research and avalanche safety in Canada, from a fatal avalanche in 1910 that took the lives of 58 rail workers in Rogers Pass to the creation of Avalanche Canada in 2004. The virtual exhibit was reportedly the first time that the history of Canadian avalanches had been gathered together in one place. The content for both the virtual and physical exhibit was developed by retired Parks Canada biologist and naturalist Dr. John Woods.

In preparation for hosting the exhibit, we’ve taken a look at what we have in our own collections related to avalanches and avalanche safety, from photographs to films to oral histories. We also invited anyone with their own avalanche story from the area to share it with us. We ended up learning quite a lot about one specific avalanche that took place on Whistler Mountain in 1978.

On March 6 that year, a storm system brought significant snowfall on the mountain. Two days later, patrollers headed out to do avalanche control on Whistler’s peak—at the time, two of those patrollers were from Snowbird in Utah and were visiting Whistler as part of a training exchange.

While the morning had started out clear, by the time the patrollers were out, visibility had become quite limited. A shot from an avalauncher was fired into the Whistler Peak North Face but, due to the lack of visibility, it was unclear what the result of the shot was. Over the course of controlling that morning, an avalanche began on the North Face and caught two patrollers who were traversing below, Bruce Watt of Whistler and Rick Mandahl of Snowbird.

Watt was recovered almost immediately as he had managed to get a hand above the snow, but it took seven minutes to locate and recover Mandahl using transceivers. Luckily, both were relatively unharmed.

The avalanche and recoveries made the front page of the Whistler Question on March 15 and were later included in a larger report on avalanche accidents by Chris Stethem, providing a lot of factual information about the incident but not including the personal accounts of the patrollers.

If you have been following the Whistler Museum’s social media over the past week, however, you might have seen two accounts of this avalanche from patrollers who were involved: Bruce Watt and John Hetherington. Their personal accounts of the avalanche provide information that neither the newspaper nor an official report would include, such as what was going through Watt’s head as he was caught or how Hetherington had to turn off his radio in order to hear the transceiver while searching for Mandahl.

If you have an avalanche story from the area that you would like to share with the museum, we will be continuing to gather and share more local information about avalanches while Land of Thundering Snow is exhibited through March 31, 2021. We would love to hear from you, or see you at the exhibit!