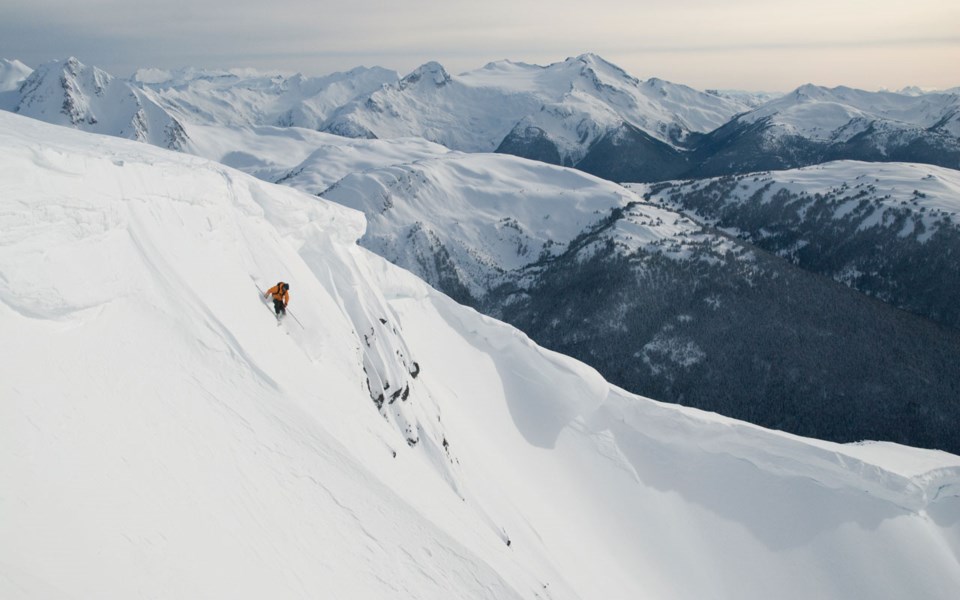 Chances are if you’re an avid hiker in the Sea to Sky corridor you own a well-loved copy of Matt Gunn’s guidebook Scrambles in Southwest British Columbia.

While the Squamish author and photographer is humble about the book’s local popularity, even after 16 years in print, it regularly sells out.

“There isn’t another book for the South Coast for scrambling, so I guess if people are into that activity, they might interested in the book,” Gunn says.

Well, fans of that book who also ski tour will be pleased to learn that after many years of work, his latest project, Spearhead Backcountry Atlas, is finally available for purchase.

“It was a crazy amount of effort,” he says of the new book. “I have a family and I work in Squamish as a planner, so I have a fairly full life. I could only work on this for little parts of time in the evenings, so it’s taken a long time. I’ve done it over many years in increments. It’s a sacrifice to give up time, but I really enjoy the process of putting that information together in a way that I think will inspire people to get out and do stuff.”

The book is a much different format than Scrambles by nature of the different activities and seasons. Less a step-by-step guidebook, the Atlas features large, compelling photos of terrain, lines, and zones all over the Spearhead.

In total, there are 59 terrain maps, 245 photos, 101 touring images and detailed route descriptions.

“When describing and writing out a travel route for a summer book like Scrambles, typically you’re following a route to an area,” he adds. “It’s defined. Skiing is so different. People are often intentionally trying to find places where someone else hasn’t gone. On any given day, you’re not all trying to find the same route.”

To that end, the book is intended to inspire backcountry users to dig into the terrain they plan to ski in detail ahead of their trip. “In each of those zones, I’ve tried to depict some of the most common lines in that area, but this book is intended as an asset of photos for the Spearhead,” he says.

Before we go any further, Gunn has a full-stop-in-bold message on the book’s intention.

“It’s really important to recognize there are inherent risks with mountain activities,” he says. “Backcountry skiing is no different. There are lots of hazards you’re exposed to in the wintertime—glacier travel, avalanches, weather changes. There are lots of risks. This book is not written for people who don’t have the skillset to manage those risks. It’s written to provide information to understand the terrain; it’s not a comprehensive review of hazards; those change all the time.”

While the book has a range of terrain, Gunn recommends educating yourself beyond just the increasingly popular Avalanche Skills Training Level 1 course and, if you want to learn more, hire a guide.

“This is not a replacement for a guide or an education or building experience; it will let you understand the terrain, to pick things out that might be appropriate,” he says.

Initially, Gunn set out to write the book covering a much larger swath of terrain, but as he set to work he realized the Spearhead was a good choice to focus on for a few reasons.

“There’s so much in the Spearhead,” he says. “It’s so unique in our area because the access [through Whistler Blackcomb] is good. There’s such great stuff to do around here. But the big issue I find on the coast is [access] starts really low and you have a lot of terrain to move through to get to the alpine. That takes a lot of effort.”

“[With the Spearhead], you ride through the resort, get off way at the top of the mountain and have this huge area to check out.”

Spearhead Backcountry Atlas is currently available for purchase online at spearheadbackcountry.com with pick-up at either Escape Route in Squamish or Whistler.

New relief for tourism businesses on the horizon, federal minister says
Jan 20, 2021 9:32 AM