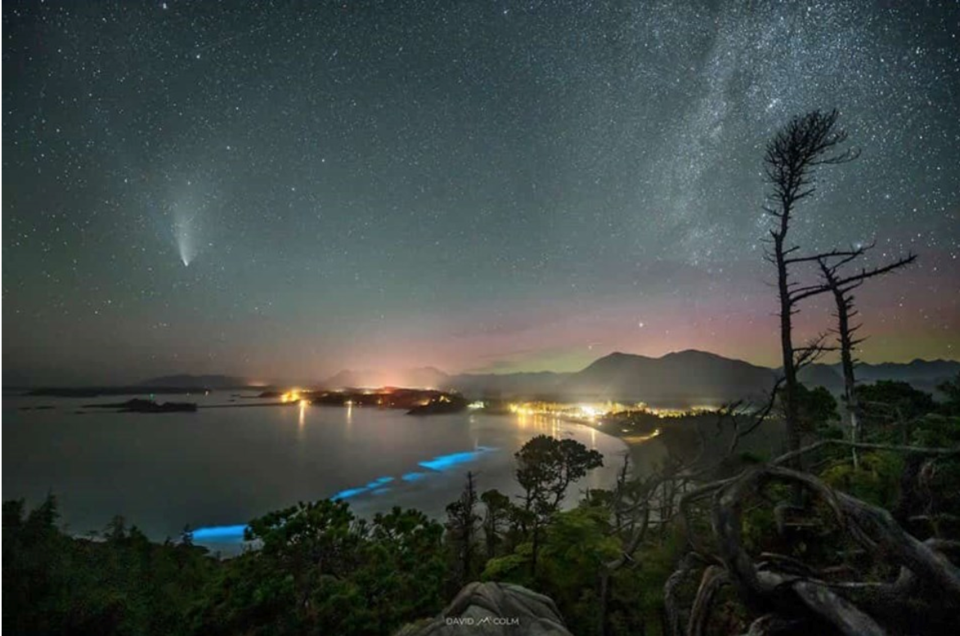 David McColm, a landscape and night sky photographer based in B.C., captured a stunning shot of the illusive comet in Tofino over the weekend. Photo: @davidlmccolm / Twitter

While a number of breathtaking images have surfaced of the rare comet NEOWISE in B.C. skies, a local photographer captured a truly awe-inspiring moment on Vancouver Island.

The NEOWISE comet, discovered in March by NASA’s Neowise infrared space telescope, reached its closest point to the sun on July 3, which caused the “frozen ice ball” to heat up and burn gas and dust off its surface.

NASA explains that, "This very close passage by the Sun is cooking the comet's outermost layers, causing gas and dust to erupt off the icy surface and creating a large tail of debris. And yet the comet has managed to survive this intense roasting."

Just before the weekend, locals were able to view of the astral display just below the Big Dipper when it reached its closest proximity to earth, as it made its celestial journey through the heavens above.

David McColm, a landscape and night sky photographer based in B.C., captured a stunning shot of the illusive comet in Tofino over the weekend.

"What a night! With the potential for some aurora action and Neowise fading day by day, I decided to head up here last night," writes McColm on Twitter.

"The comet, bioluminescence, the Milky Way and even a bit of aurora - just wow."

What a night! With the potential for some aurora action & Neowise fading day by day, I decided to head up here last night ... the comet, bioluminescence, the Milky Way and even a bit of aurora - just wow ❤️ #Tofino #BC @TamithaSkov @HelloBC @tourism_tofino @StormHour pic.twitter.com/woCxumwwVj

McColum has also shared a number of other mesmerizing photos of NEOWISE on Twitter over the past weeks.

Comet Neowise in & around Tofino, BC continues to impress ... and change from night to night! Here's to getting out as often as possible to enjoy (and shoot) this stunning & rare deep sky event! @tourism_tofino @HelloBC @StormHour #NEOWISE pic.twitter.com/lvb9g2z8zR

To be able to see & shoot the stunning comet Neowise over Tofino, BC the last couple of days has been an incredible bucket-list experience & then last night it even came with a wee bit of aurora #justwow @TamithaSkov @tourism_tofino @HelloBC @StormHour #cometNEOWISE pic.twitter.com/v5RobhNwKs

You can view more of McColum's photograhy on his website HERE.

Last week, a local astrophotographer shared a remarkable image of a rare comet and Aurora Borealis at Harrison Lake.

Liron Gertsman, a 19-year-old astrophotographer and astronomy enthusiast, tells Vancouver Is Awesome in an email that he's never had the opportunity to shoot a comet before. The last comet visible from the northern hemisphere that was comparable to NEOWISE was Comet Hale–Bopp in 1997, which was before he was born.

The previous night, Gerstman also photographed the comet from over English Bay, resulting in a very "Vancouver" landscape image featuring the comet. Read more and see the photos HERE.

Whistler Waldorf School makes its debut at The Gallery
May 14, 2021 9:00 AM
Comments