A quarter century of good times

I stroll onto the grounds of Canadian Wilderness Adventures' (CWA) Callaghan base, a throng of kenneled sled dogs barking at my presence from behind a high wall.
Oct 31, 2018 6:00 PM By: Vince Shuley 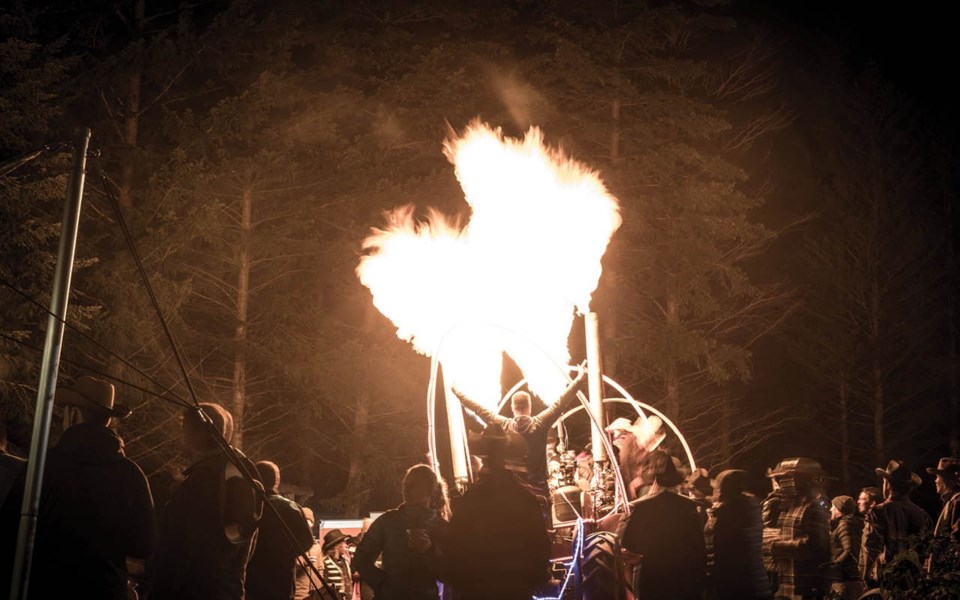 I stroll onto the grounds of Canadian Wilderness Adventures' (CWA) Callaghan base, a throng of kenneled sled dogs barking at my presence from behind a high wall.

Party-goers alight from a shuttle bus are donning hats and costumes all adhering to the official theme of "electric cowboy." Several bonfires crackle, all ringed with people feasting on Thanksgiving dinner and enjoying libated, laughter-filled conversations.

DJ music thumps from "The Barn," a log structure purpose-built for events just like this. Then the party's magnum opus arrives; a two-metre long wheeled carriage towed at crawling pace by a tractor, all dressed up with neon LEDs and piloted by none other than the CWA's founder, Allan Crawford. Passengers and onlookers think they've seen it all when propane-fuelled flames shoot into the sky like a Burning Man celebration, safely controlled by CWA's chief mechanic (and pyrotechnician) Dennis van Dongen.

It's good to be back.

The celebration on Thanksgiving weekend was to celebrate the 25th anniversary of CWA. More than 150 people attended, staff past and present, their partners and families. It was the largest gathering of CWA alumni in the company's history, dating back to the original duo that pull-started a snowmobile tour operation in 1993: Crawford and then-business partner Doug Washer.

"We both sold our pickup trucks and I think Bombardier had a really good financing plan which was new at the time," recalls Crawford. "Our mothers pitched in to help us buy one snowmobile each for a total of six. Five for the guests and one for the guide."

Both Crawford and Washer were working as grooming staff at the time for Blackcomb Mountain, which was looking to add activities in order to gain every competitive edge over adjacent Whistler Mountain. Washer and Crawford would tag team guiding duties between graveyard shifts, making for some long days and nights.

"We worked four-on, four-off shifts with grooming, so that meant every eight days of our first year one of us had to work around the clock. I always thought success would be measured by when I could get eight hours of sleep again."

Like most Whistler startups, it took a while before either of them were making a living off guiding snowmobile tours.

"Every bit of money we made went back into the company for snowmobile payments or trying to buy things like helmets, radios and first aid gear. Blackcomb (Mountain) was really good to us and still are. They lent us all sorts of gear to get going. But we lived off the gratuities. You had to run a good trip and get tipped or else you weren't eating."

The company slowly grew, adding more machines to the fleet, recruiting staff, selling more tour products and even guiding members of the British Royal Family on a snowmobile trip in 1998.

But Crawford's vision was far larger than that. He wanted space for more fun and recreation, where he could rekindle his youthful passion of building from reclaimed materials, much like the stories he read during university in the E.J. Hart book Jimmy Simpson: Legend of the Rockies. That began to manifest after a 30-year tenure in the Callaghan Valley was granted to CWA in 2007, allowing Crawford to install such quirky structures like "The Caboose" (a real train caboose originally salvaged from a wreck), the aforementioned barn and the beautifully-positioned Sproatt alpine cabin.

The company now employs a roster of more than 60 staff and Crawford is partnered with German businessman (and former snowmobile tour guest) Uli Jordan, who strongly supported Crawford's vision of expanding the Callaghan base.

The site now serves as a year-round hub for all sorts of outdoor activities and is a popular venue for weddings and staff parties.

The 25th anniversary party was an emotional time for Crawford, who attempted to catch up with as many old friends as possible over the course of the night.

"It needed to be a week-long affair, I wanted to talk to every single person. That party showed me how solid all those old friendships were. People who hadn't worked there for 20 years were stepping in to help with the party. It made every struggle we've had as a company worthwhile. I have so much gratitude for all the people who've stepped into this world of mine, the party was my way of saying 'thank you.'"

Vince Shuley worked as a snowmobile and ATV guide for CWA from 2009 to 2014. He still enjoys attending the legendary parties. For questions, comments or suggestions for The Outsider email vince@vinceshuley.com or Instagram @whis_vince.