Angel in the Snowfield

If you have the good fortune to revisit the same storied places over the years, a few will always hold special sway. For me, Engelberg, Switzerland, is one of those.
Mar 28, 2018 6:00 PM By: Leslie Anthony 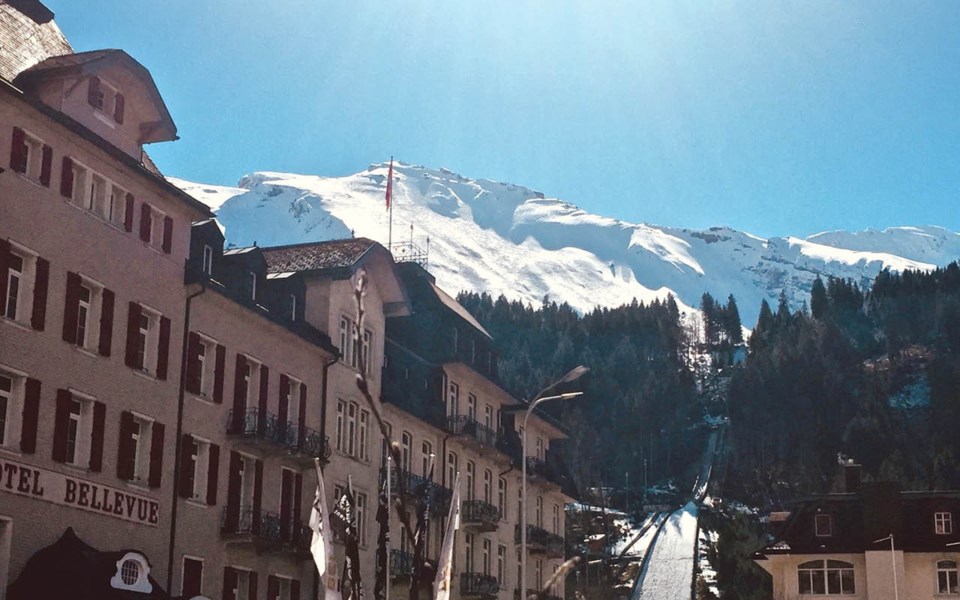 The top of the legendary Laub rises above the town of Engelberg, Switzerland. Photo by Leslie Anthony

If you have the good fortune to revisit the same storied places over the years, a few will always hold special sway. For me, Engelberg, Switzerland, is one of those. Located high in the central Alps, "Angel Mountain" bristles with Swiss icons: frequent, punctual train service to Zurich; a charmed Dorfstrasse lined with neat, wood-shuttered hotels; chocolate, cheese and chronometers galore; and a Benedictine Monastery founded in AD 1120. It's also one of the country's oldest winter resorts, having celebrated its centennial back in 2004. As a ski writer, of course, it's Engelberg's titantic terrain and prodigious snows I most appreciate—as well as the friends I've enjoyed them with.

One of those is Geny Hess, whose genealogy here dates to the 1600s and whose family-run hotel was a village landmark from 1884 to 2001. Back in 1996, on a Powder assignment to seek out unheralded European ski areas, I arrived in Engleberg to post up at his Hotel Hess. Instructive on matters of food and the contents of his enormous wine cellar, Geny also proved to be The Man when it came to deconstructing the mountain's manifold secrets. Only too pleased to show newcomers around, Geny would lead me on several life-altering descents. It began on my first day, when I met him at a mountain bar overlooking the resort's marquee Titlis Glacier. As we sat considering where to ski, a guide and client etched improbable first tracks down the waterfall of ice below. Geny drained his cider, pulled on his toque, and declared: "I think we go there ... "

We'd crammed ourselves into a rotating aerial tram, debarking at 3,300-metre Klein Titlis where, with no ceremony, we dropped in. Geny swooped lock-legged over a vast glacial expanse and between seracs as I followed him down a Whistler-worth of knee-deep snow. The sun was out and the snow excellent, so we knocked in a second run.

It went so well that Geny reckoned we'd finish the day with the Geltiberg, a white-knuckle, 2,000-vertical-metre off-piste gem that hour-glassed into a rock canyon and doglegged over hanging terraces.

As we tipped down a sunlit glacial tongue into the shadowy gorge, it felt like sliding into a giant throat to be swallowed by the Alps. Excellent snow couldn't obviate the dangers of the descent, but Geny was in his element, the reserved hotelier even whooping at times like the brash Canadian he accompanied. We'd regrouped at traditional safe points, Geny explaining the route and hazards—a narrow ridge above a gaping plunge that needed to be side-slipped; a careful traverse to a series of ramps beneath massive cliffs. At most stops he'd simply grinned from ear to ear, but at one he'd gazed contemplatively across the valley. "My friends and I were first to ski the Geltiberg," he said in a quiet voice. "It was June 5, 1965. We started in powder at the top and ended in corn right here—then we had to walk a fair way down."

This day, it would be another 15 minutes of skiing and a half-hour of glades and bushwhacking before we hit the valley floor and a bus back to town, another of the Angel's mythical stashes under my belt.

With 60 centimetres materializing like magic overnight, the next day was an Engelberg classic—best of the season according to locals. Geny and I did the Titlis glacier again, where, at the bottom, he proclaimed with great solemnity: "It's time to make the Laub."

If "Laub" doesn't mean magnificent, it should. I'd first encountered it as a black-and-white frontispiece in an old British book, The Ski-runs of Switzerland, which depicted a monstrous face with a shallow central gully. With a sustained 40-degree slope and 1,200 metres of vertical it was a run like no other, and in powder, mind-altering. Even heli-ski operators wouldn't think of cutting clients loose on something so long and steep. At the top, where Geny stopped to dig a pit, he described a memorable ride down the Laub when he was young. Skiing alone, he'd dropped in skier's right, a typically safer route, but three turns into it the slope had released, rocketing him downward in a billowing powder storm. Miraculously, Geny popped up 1,000 metres down the face, buried to the chest, minus rucksack and skis, barely alive but a whole lot wiser. The Angel had spared him.

Back in 1996, with its reputation for fearsome avalanches not yet diminished by the stabilizing effects legions of freeskiers would later bring, the Laub's steep northeast ramp still required care. There were tracks aplenty that day, but also plenty of untracked. We tiptoed in, greeted by sunny face shots and our own exclamations. Hundreds of turns and many stops later, we celebrated with a traditional coffee and schnapps on a hotel deck, congratulating ourselves on another wondrous day.

Engelberg would deservedly go on to become one of the freeride epicentres of the Alps, for which I'll accept some blame, but I will always be grateful for experiencing it in its original intimidating state with Geny, my own Angel in the Snowfield.