EDITORIAL: Something needs to change on Highway 99 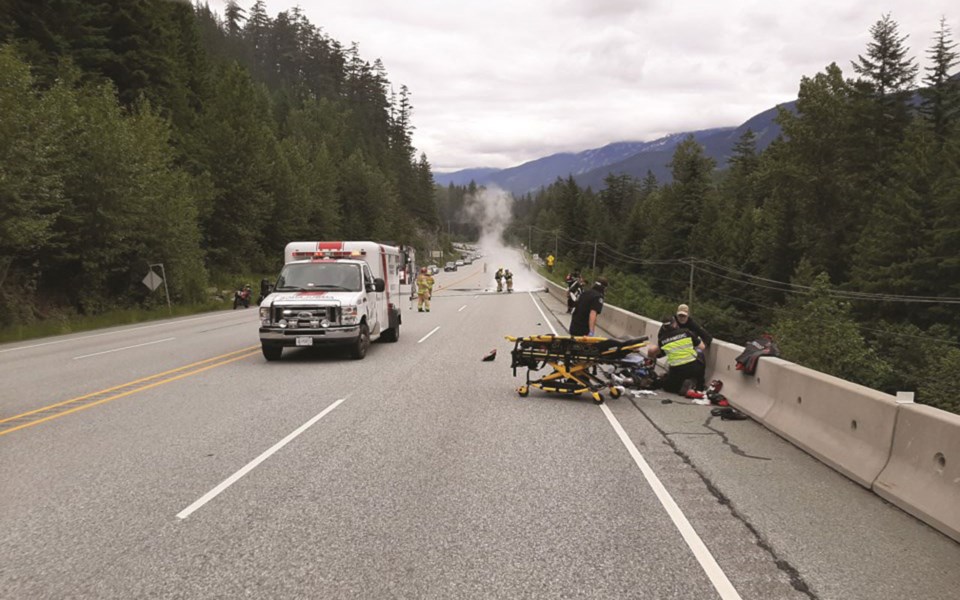 Photo courtesy of the RCMP

Driving the Sea to Sky Highway brings out the worst in me.

I don’t mean that I speed, cut people off or tailgate—rather, driving the stretch from Squamish to Whistler (as I used to do every work day in the “Before Times”) often fills me with a seething rage at least once per trip.

And I suspect I’m not alone.

On recent drives, I’ve witnessed a driver pass another in the right lane, slow vehicles clogging up the passing lane, and a mountain biker cut across a busy stretch of highway and offer up the middle finger by way of apology.

At best, it’s unpleasant. At worst, it’s a disaster waiting to happen.

Is it just me or are people who drive this particular stretch of Highway 99 uniquely grumpy about it? I commuted for a year from Pemberton to Whistler and I don’t ever remember this kind of desperate urgency and impatience.

But the situation is shifting from annoying to deadly.

The motorcycle accident that happened near Function Junction last Sunday, Aug. 9, marked the fifth motorcycle incident in the Sea to Sky corridor in just over a month. The highway was temporarily closed in both directions just south of Function Junction as an air ambulance attended the scene.

The situation has progressed from coincidence to a full-on trend. After the third accident—two motorcyclists died in separate incidents on July 3 and 5 near Pemberton and a non-fatal accident happened near Function Junction on July 4—Pique talked to a few experts to try to figure out what exactly was going on. (“Motorcycle fatalities underscore risks of navigating Highway 99,” July 9.)

While Jamieson Murray, owner of the Squamish Motorcycle Shop, suspects multiple factors are at play, there’s a good chance the ultra-heavy traffic is one of them.

“I personally don’t ride on Friday, Saturday or Sunday because it’s a gong show on the highway,” he told Pique. “People who take those risks, the accidents that are happening, are taking place on the weekend. And now with COVID, everyone is getting out and going north.”

Another possibility is inexperienced riders are heading out on winding mountain roads they’re not used to navigating.

“If you’re not out there riding in a way that isn’t compatible with something you’re not expecting, then you can expect to get in trouble,” said Brian Antonio, school director for ProRide Motorcycle Training in North Vancouver.

While we don’t know the exact details of all five accidents—if the motorcyclists were experienced or what roads they most often ride on—we do know they either took place slightly north of Pemberton or slightly south of Whistler.

We also know something needs to change.

So what can we control in this situation? First of all, motorcyclists need to slow down. I’m sure I’m not alone in having witnessed bikes go well above the speed limit on the road. With motorcycle riders in my immediate family, it’s a sight that always sends my heart up into my throat.

Second, drivers of four-wheeled vehicles have an obligation to look out for their two-wheeled counterparts as best they can. Regardless of who’s at fault, it would be an unbearable experience to be a driver who hit someone on a motorcycle.

ICBC, meanwhile, also has a list of safety tips for motorcyclists, including: practicing emergency braking and avoiding unexpected obstacles; staying out of drivers’ blind spots; watching drivers for clues; planning your path before you navigate a curve; and riding at a safe speed.

Summer and motorcycle season is far from done yet. Let’s make the highway safer for everyone with the goal of avoiding any more accidents.