LETTERS TO THE EDITOR: Hug a firefighter—when COVID-19 is over! 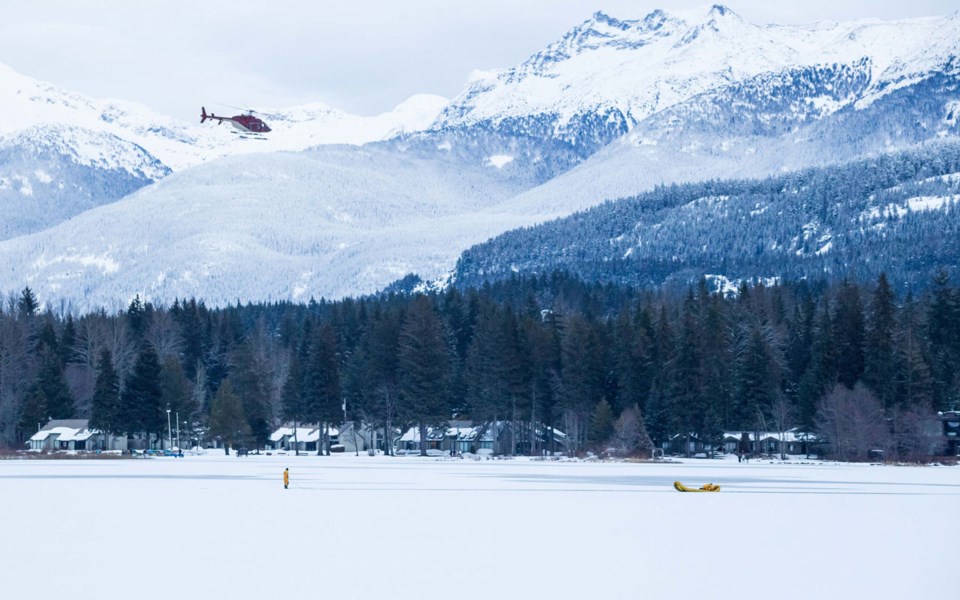 Rescue crews save a man at Alta Lake on Jan. 9.Photo by Adam Taber

Watching the flailing arms of the drowning man in the centre of the lake while firefighters sprint-crawled the Rapid Deployment Raft across the precarious ice with everything their arms could deliver was both gravely tense and inspiring.

We are very appreciative, grateful, and proud of all our emergency response personnel: RCMP, Emergency Medical Technicians, firefighters and the helicopter pilot who all teamed in on the rescue.

Watching the layered-response system, with our highly skilled firefighters taking the lead role to rescue an extremely fortunate individual, brought tears to our eyes.

There is no greater reward in life than saving one.

As we reflect on the past year, and set resolutions for the New Year, I wonder if I can look my children in the eyes and say that this past year I have done everything I can to address climate change.

If they were a little older, they might wonder why we seem to be ignoring the extinction of the human race, and why Canada keeps building pipelines instead of solar and wind [power infrastructure]. They might even reject the idea of taking a polluting vehicle just to get a carton of oat milk. And they should look back at us with some disdain, even disappointment.

It seems silly to think that the real challenge has been getting everyone to acknowledge we need to move away from a fossil-fuel economy. That took awhile!

We now know we need to make dramatic changes and fast. Whistler’s [municipal] council rose to the challenge recently approving the Big Moves Climate Action Plan, to reduce [greenhouse gas (GHG)] emissions by 50 per cent by 2030, our most ambitious target to date, and the only way we might stand a chance.

The problem is: The 6 Big Moves together do not amount to hitting the targets. In fact, last year we saw a four-per-cent increase in GHG emissions. So even with all of the big moves, the gap to hit the targets is larger than any one move. Which means we will need bigger and bolder moves, and we will need every taxpayer’s dollars dedicated to these impacts.

Lucky for us, Europe and China have shown us the way. Already, Masdar and Dongtan have become zero-carbon cities, and Copenhagen will become the first carbon-neutral capital by 2025. A disbeliever? Ask your children what we should do?

Bigger move: Go gas free. Thirty-five per cent of our building emissions are due to gas, not to mention the massive amount we spend to FortisBC and BC Hydro ($1.8 million) every year.

Bigger move: Go on-demand electric. We have plans to transition all municipal fleets to EVs. Great! Yet will ridership increase just because it’s electric? Implement on-demand bus service technology and prepare for AV fleets. Did you know that in order to hit our targets, all Whistler citizens will need to commute 50 per cent or more via bus or active transportation (bikes and walking)? That’s one in two trips. So the biggest impact we can have as a community is to stop travelling by car. Imagine we replace Whistler’s 5,800 cars with e-bikes, allocated covered parking, and safe, dedicated streets (not road shoulders).

Bigger move: Work with BC Hydro and FortisBC to make Whistler energy autonomous and fossil-fuel free by 2030, prevent investment in gas and update zoning to 100-per-cent electric. Build wind and solar energy infrastructure on the mountain ridge—harness energy all night, and store it by day.

Biggest move: Invest in smart-grid renewable energy infrastructure now, and show our province and our country that it is possible for a community to take climate action together as fast as possible. Because we don’t have much time.

On Saturday, Jan. 2, a Whistler Blackcomb employee named Chris made my morning.

I was in the Excalibur line-up at 8 a.m., getting rained on and already pretty soaked. As I approached Chris, he initiated pleasantries then asked, “Where are your sticks?”

I explained using as few expletives as possible that in my haste to beat traffic to the upper lots and drop my son at ski school, I had forgotten my poles at home.

Immediately, he flagged a colleague to take his spot, ran into Affinity and came out with a pair of poles for me.

He didn’t even ask my name, just said, “Have a great day”!

This was sweet way to start the New Year.

A lot of reasons to welcome another Olympics back here

The 2010 Olympic and Paralympic [Games] were a huge success for Whistler.

Not only did we get on the world stage with all the events, but there were also many benefits realized.

There were major improvements to the [Sea to Sky Highway], 240 resident-housing units moved over from the Athletes’ Village, a world-class Nordic centre that is in use a lot of the year [and] a sliding centre that has helped local athletes take up the sports as never before.

The pride that I felt and many other volunteers from around the world felt was tremendous. [I remember] the bus drivers that the locals helped steer in the right direction the first few days, [and] even the police from across Canada started to relax a little after everyone was so friendly to them.

Watching a local father crying with joy at the finish line as his daughter won a gold medal with her blind teammate in alpine skiing—there were some good memories. Could we, should we do it again? I believe that now that we have many of the venues in place it makes sense to at least pursue the option. We could also move the Cypress events to Blackcomb and avoid the no-snow problem.

The town was really vibrant for that period and we are known around the world as a place to come and visit even if you are not a skier. All in all the positives outweigh the negatives, not to mention that we may wind up with another 300 units of employee housing.

In this year of finding silver linings, we had the honour of dropping off a holiday bag of donations to the Whistler Community Services Society (WCSS) before Christmas all donated by the parents, students, teachers and staff of Spring Creek Community School.

Our usual Santa’s Workshop was unfortunately put on hold this year and we pivoted to a “Secret Santa” fundraiser to continue our tradition of giving back to the community we love.

Over $1,100, plus all of the online donations for the food bank and hamper program, was raised! We are touched by the generosity of our school, and the Whistler community in general, for rallying and taking care of our own during this time.
A huge thank-you to our parent volunteers, Cristiana Spooner and Anita Patel, for leading this effort and to WCSS for everything you do!

We are grateful for everyone who donated and let’s keep this glow of gratefulness and generosity as we enter 2021!