Living on Easy Street — riding the wave of constant change

"I never liked the name of our street. After all, living at Whistler isn't easy. But then, things that matter are never easy..." Kashi Richardson It seemed like they had it made. The skiing was great.
Jul 25, 2012 9:00 PM By: Michel Beaudry 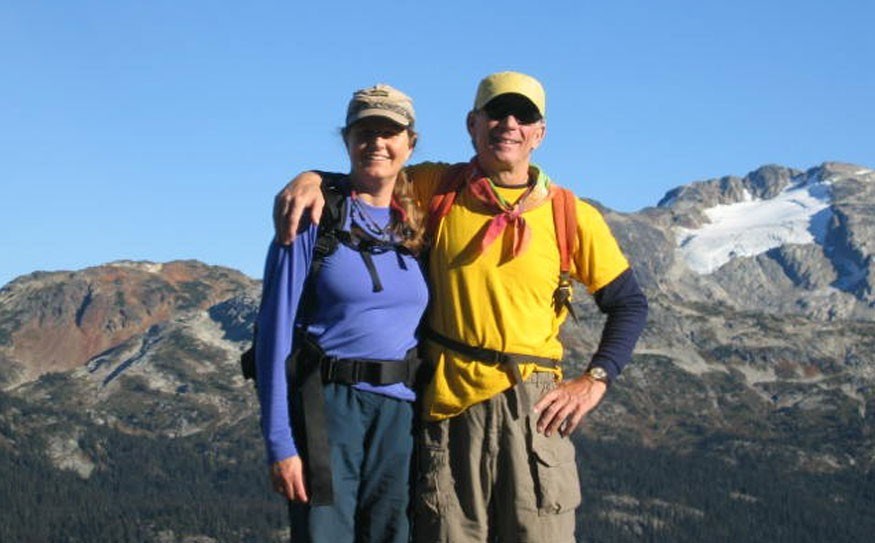 "I never liked the name of our street. After all, living at Whistler isn't easy. But then, things that matter are never easy..."

It seemed like they had it made. The skiing was great. Their mom-and-pop transportation business, Snow Goose, was immensely popular. And talk around the valley hinted of even bigger things to come in the future. For Kashi Richardson and her beau, Bob Daniels, Whistler in the late 1970's was a time of great promise.

But it was never easy. "We worked our tails off in those years," says Kashi. She sighs. "And that's because we really believed in what we were doing." She shrugs. Sighs again. "We put our heart and soul into that business...."

It was during a low-budget trip to South America, she explains, that the couple experienced the social benefits of public transport first-hand. "You can't remain in your own little cultural bubble on a bus," she says. "It's so easy to connect to the people around you..." So they came back to Whistler in 1977 with a mission. "I wanted to help people ride together," she says. "Back then I really thought that if we could all get together on the bus we would all come together as a community."

Ahead of their time? No question. Successful? Without a doubt. Alas, when it finally came time for Whistler to make the next big development leap, the enterprising young couple was left out in the cold. "We sold the business in 1981," says Kashi. She sighs again. They had no choice, she explains. "With the coming of Blackcomb and the building of the Village, Whistler council embarked on a new vision. Suddenly they didn't want mom-and-pop operations anymore. They wanted established companies..."

Sounds awfully familiar. Plus ca change, plus c'est la meme chose. No? But I digress.

Still, Kashi wasn't all that disappointed in the outcome. "When we sold," she says, "for me, it was like 'Hooray!' I was so relieved to be free of stress again."

The irony in all this, of course, is that the "big" company that took over Snow Goose ran the operation for a few years... and then folded. "So Whistler had no transportation again." Kashi tries not to laugh. But she can't help it. After all, it is funny. And sad.

Fortunately there's an upside to this story. "Selling Snow Goose allowed us to build our house at Tapley's," she tells me. Arguably the most successful social experiment at Whistler, the Tapley's Farm development came about when a posse of longhaired locals decided to take ownership of their housing woes and do something about it. The result was the creation of the legendary Mountain Development Corporation (MDC) — and the first stab at creating affordable resident housing at Whistler.

"This was not a top-down thing," she explains. "It was totally grass-roots. Entirely community-driven." And it worked. Like many of MDC's original investors, Bob and Kashi still live in the house that they built on Easy Street back in 1983.

"Seems so long ago now," sighs Kashi. And then she laughs — like only she can. Clear and happy and guileless. "Still, building a house here in those years provided us with so many opportunities..."

Back then, you see, finding a place to stay at Whistler was a major headache. People would pay astronomical sums for winter accommodation. So why shouldn't the new homeowners take advantage of the housing shortage? For Bob and Kashi it was a no-brainer. "We used to joke that we couldn't afford to stay at home," laughs Kashi. "I mean, we could rent our house out for the winter and visit the rest of the world on that revenue." So they travelled: to the West Indies, and Thailand and Burma; to Nepal and Sri Lanka and India. And everywhere they went, they made sure to take a piece of their experience and bring it back to Whistler.

Travel is great and all. But by 1986, Kashi and Bob were ready for their next adventure. With the birth of their first daughter, Claire, Whistler's newest parents discovered a whole new dimension to the Whistler experience. By the time Mia was born two years later, Kashi had fully integrated into the valley's irrepressible "mom network."

"This is such a great place to raise kids," she enthuses. "The Whistler community is alive and well and has been for a long time." She points to the valley's school system as a prime example of that. "We knew all the kids' school teachers personally — they were part of the community. When our kids graduated, more than half of the class had been together since kindergarten!"

She's also a huge fan of the high school's outdoor program — and the man behind its success. "I can't say enough about that program or about Mitch Sulkers. He's become an important mentor to so many of the graduates." This is how her eldest daughter explained it to me some years ago: "The program," said Claire, "comes at a time in school — Grades 11 and 12 — when most kids are getting bored with the 'Whistler Scene.' What Mitch does is introduce them to a way of experiencing the outdoors that is both positive and incredibly inspiring." The result? The kids are asked to take on a lot of responsibility, and most rise to the occasion. "It really makes you reflect on who you are," concluded Claire. "Makes you a stronger, more confident person."

As good as the schooling was, Bob and Kashi never hesitated to pull their kids from class for extra-curricular education. The family went backpacking to the most exotic locales — to Central America and Southern Mexico and Nepal and Bali and... "But the girls always had to carry their own bags," laughs Kashi. A minimalist traveller by nature, the young mom was not one to over-indulge her daughters. Being hungry and tired was part of the adventure. Whining was definitely not on the menu. As for learning: every day, every new mile, provided lessons for the girls. "And the great thing," adds Kashi, "is that the Whistler school teachers approved and supported us. In most cases they even facilitated the girls' travels."

Of course, their international travel had been preceded by local trips. "When the kids were young, we'd take them backpacking in their own backyard — to Burnt Stew Lake or over Singing Pass." She laughs again. "And because we could ride the lifts, it allowed us to access the alpine with all our gear and our kids intact."

As an active mom with an uncommon passion for the outdoors, Kashi had one cure-all for her kids. "My medicine for anything was: 'Get outside!'" she tells me.

"And that's one of the great things about growing up at Whistler: that the kids could go off on their own and explore the outdoors. When we built our house in '83, it backed onto a forest. It was a totally wild environment. When they cleared that forest to build a school I was devastated at first." She sighs. "Another piece of wild Whistler gone, I thought.... But then when I saw my kids climbing over the fence and getting to school in minutes, well, I had to re-evaluate. Turned out it was a great thing after all."

And that, she says, might be a worthy lesson for Whistlerites today. "I think that's the way we need to approach Whistler's development," she maintains. "Change is the only constant here. Nothing is forever. And we have to accept that."

But there's more. A yoga teacher for nearly two decades (a teacher of teachers in fact), Kashi has invested much of her post-childrearing years exploring ways of achieving balance and peace in one's day-to-day life. Her conclusion? We all have to learn to give a little. "What's in it for me?; what can I get out of this?; what can I take? — too often we let greed and envy take over in life," she says. "But that only leads to wanting more. And more. And more. Rather we should be asking: What can I bring? What can I contribute? What can I offer that will make this a more positive experience?"

Such a simple message. And yet so profound. "And it's happening all around us," she says. "We just have to pay attention." And she leaves me with one last story. "I used to cringe when springtime came to Whistler," she recounts. 'That's when the bulldozers and dump trucks invaded and another beautiful place would be destroyed. It was all noise and mess and construction back then. At least in winter the building activity ceased..."

But then, she says, she finally came to terms with it all. "Whistler was on the fast track in terms of growth. And there was nothing I could do to change that." She then realized just how close the "original" Whistler remained. "All you need to do is venture off the beaten path a few steps to see that this is still a wild and untamed place," she says. "No matter how we attempt to make Whistler 'pretty' and 'civilized,' its true nature will always shine through." She smiles one last time. "And for me, right now, that's good enough."