Local papers depend on their community

This week, our community said goodbye to a piece of its own history with the closing of the Question newspaper.
Jan 24, 2018 5:00 PM By: Clare Ogilvie 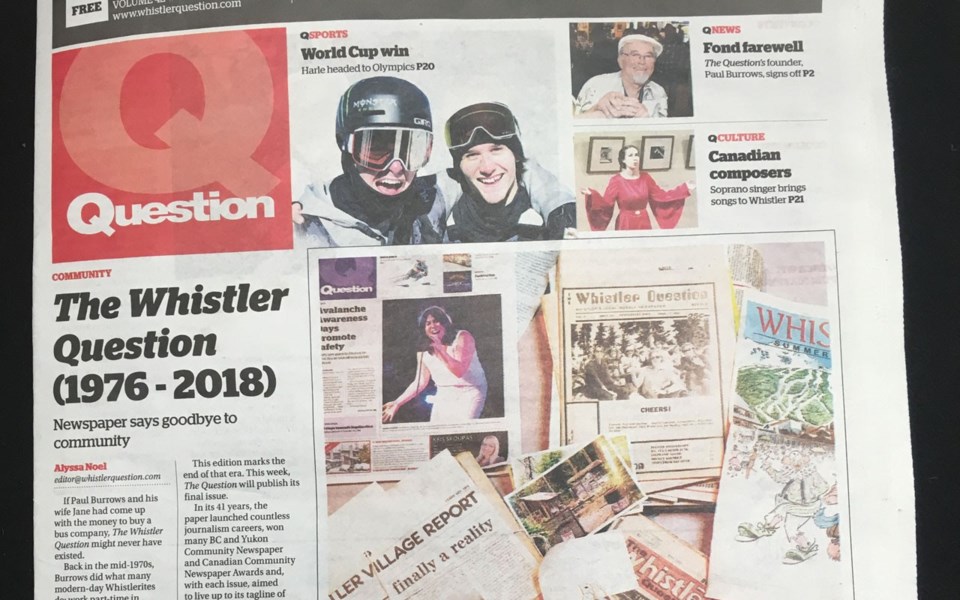 This week, our community said goodbye to a piece of its own history with the closing of the Question newspaper.

For decades, it was the paper of record for Whistler, and as many readers likely know, the founders of Pique, Bob and Kathy Barnett, got their start at the Question as well.

For most of my Pique career, beating the Question at news was a daily goal, then, five years ago, the two publications became sister newspapers and looking out for the success of both was the new goal.

It's no secret that the newspaper industry is under threat thanks to the rise of social media, but it is also becoming more and more apparent that if readers want real news they have to get it from trustworthy sources, and both the Pique and the Question are, and were, just that.

This is a role the Pique will continue to fulfill.

Many take the role of their local community newspaper for granted.

Indeed, a media poll not too long ago found about two thirds of people surveyed said closing a newspaper wouldn't really affect them, yet when that same poll asked respondents what their No.1 source for trustworthy information was — you guessed it — it was the local newspaper.

Among all adults in the Pew Research Center survey, newspapers were cited as the most relied-upon source, or tied for most relied upon, for information on crime, taxes, local government activities, schools, local politics, local jobs, community/neighbourhood events, arts events, zoning information, local social services, and real estate/housing.

That's a hefty list for a service that many people think they wouldn't notice if it disappeared.

The reality is local newspapers have a complicated and symbiotic relationship with their readers and social media followers. We need each other.

Late last year, headlines across Canada screamed of the decision by Torstar and Postmedia to shutter three dozen community and free papers and swap other papers in an effort to deal with declining advertising revenues. Two hundred and ninety one jobs were eliminated.

"This is a crisis situation," said Postmedia executive chairman and CEO Paul Godfrey. "Most deals you make, you want them to be win-win. Unfortunately, this is a lose-lose. You lose brands and you lose people."

Think about this: Of the $5.5 billion spent on internet advertising in Canada in 2016, an estimated 72 per cent went to Google and Facebook, according to the Canadian Media Concentration Research Project.

Ryerson journalism professor April Lindgren has spent the last two years tracking Canadian news mergers and closings. More than 150 communities across the country have been affected and are considered "news poverty areas."

In B.C., Pique's owner, Glacier Media Inc., and Black Press Ltd. traded more than a dozen papers in communities, concentrating ownership of multiple publications. Many of the papers were subsequently closed.

Whistler is fortunate that the Question's editorial staff is joining Pique — Alyssa Noel will be the new assistant editor and the arts and entertainment editor and will remain editor of many of the supplements produced out of Whistler for Glacier.

Question reporter Megan Lalonde will continue as a reporter, but will also focus on Pique's social media as well.

Our sales and production teams will continue working for the community and Pique.

As well, several of the voices you have enjoyed in the Question will be joining the Pique.

Andrew Mitchell will be coming back to Pique — he was sports editor for many years before editing the Question for a year then heading into communications — as an editorial voice in our "Pique'n Your Interest" column, which will have a new place up front in the editorial/news section.

"The Outsider," penned by award-winning writer Vince Shuley, will also now be found in Pique every two weeks starting Feb.8. Vince's tales from the backcountry both near and far will continue Pique's tradition of looking at what mountain culture is and how we celebrate it, as well as offering timely advice.

Pique columnist Leslie Anthony will continue to write "Range Rover" and will also take on a new environmental column exploring local and other issues that affect all of us. For those who don't know, Leslie is an award-winning science and adventure journalist, and author of several books including the recently released, The Aliens Among Us.

Lisa Richardson and her "Velocity Project" will also find a home in Pique starting Feb. 8. Pemberton's favourite writer for the last nine years will try and help us slow down and enjoy the mountain culture that surrounds us.

At Pique, we firmly believe that for democracy to work there must be a strong press and we are committed to covering the stories that matter to Whistler and the Sea to Sky with sophistication, depth, complexity, analysis, and background explanation.