Long journey of the Ainu 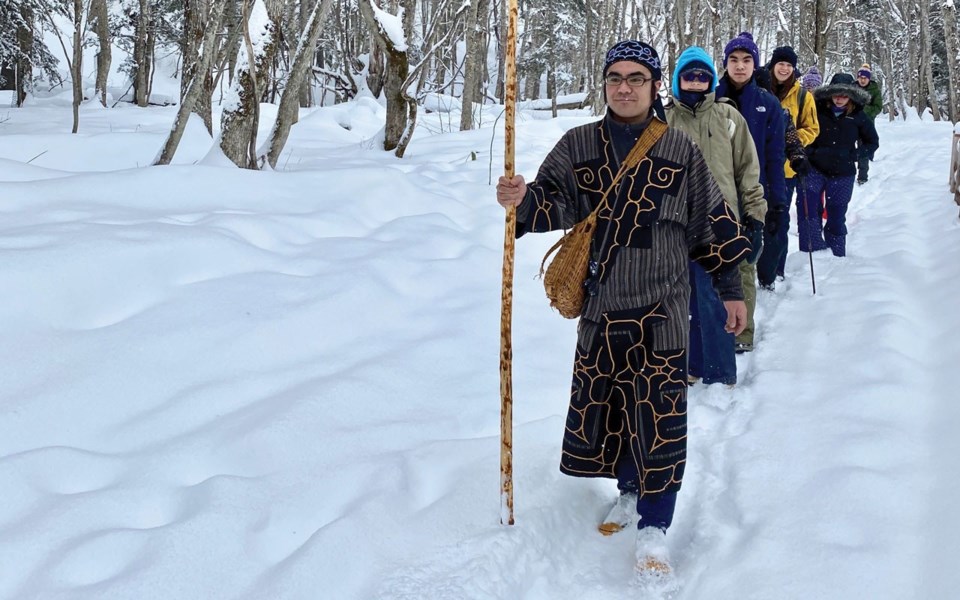 A FIRST NATIONS LESSON Ainu woodcutter Kengo-san leads a walk in the forests near Lake Akan in eastern Hokkaido. Photo by Leslie Anthony

As we walk, fresh snow swirls deep around Kengo-san's boots and the hem of his tunic. One minute he wields his long staff like a sprightly Gandalf out for a speed-walk; the next, he reaches it up to pull down branches, demonstrating how, in more verdant seasons, he might bring fruit and nuts into reach. He also points it at noteworthy plants: the bark of this birch is shredded for fire starter; this vine yields woven bags, headbands, clothing; the Katsura tree's strong, light softwood is carved into bowls, chopping blocks, dugout canoes, paddles. Kengo even taps his staff on the faded purple flower of an interpretive panel. Aconite, he says, highly toxic. His people once used it to tip weapons for hunting large animals like deer, brown bear, even whales. He seems pleased to report this ingenuity.

"Are the bears sleeping now?" someone asks as we slog onward.

"I sure hope so," says Kengo, a wry smile raising his eyeglasses.

As we approach the shoreline of Lake Akan in eastern Hokkaido, the forest thins and Kengo pauses again. With a muddy hotspring bubbling behind, he explains the reason for a small exclosure beside the trail: inside, plants that grow only on this volcanic hotspot are protected from browsing deer, reestablishing habitat for a rare cricket that lives off them.

Kengo, a woodcutter by trade, comes by his deep understanding of nature honestly. His heritage is Ainu—the original Indigenous people of northern Japan.

Like their distant cousins, First Nations of the Pacific Northwest, the Ainu hunted in thick forests, fished salmon from raging rivers, and gathered what land and sea provided. This nature-dependent lifestyle yielded profound animistic beliefs in which everything—mountains, valleys, seas, fire, wind, animals, plants, tools, clothes—were manifestations of kamuy (gods or spirits) taking on that form. Respect and gratitude were at the core of these beliefs; in fact, the Ainu have a powerful ceremony that commemorates all species that have gone extinct—and begs forgiveness for it.

Anthropologically, Ainu have the most restricted distribution of all east-Asian subgroups, once occupying only the southern part of Sakhalin Island, the Kurils, Hokkaido and the northern reaches of Honshu. The unique Ainu language has no written counterpart; nevertheless, fully 90 per cent of place names on Hokkaido are derived from it. With Japan annexing Hokkaido in 1869, it has only been part of that country for 150 years. Annexation came with the expected colonial imperatives of resource exploitation and assimilation; it also came with marginalization, discrimination, and cultural dismissal. In fact, officials long tried to obfuscate the Ainu's existence—so effectively that to this day, many Japanese know little or nothing of their existence. Thankfully this has changed over recent decades and the Ainu are undergoing a cultural revival and elevation of status.

The total remaining population of "pure" Ainu is thought to be around 17,000. At Lake Akan, an Ainu Kotan (settlement) of 36 residences contains about 120 people. They survive on the sale of popular traditional crafts—intricate wood carvings chief among them. In the upper part of the Kotan, beyond carved poles reminiscent of Canada's coastal First Nations, the traditional home of a four to five-person family has been recreated for visitors. Inside this pon cise (small house) one can see quotidian tools, cooking and fermenting items, and functional daily clothing like gaiters, headbands, and boots of bark, fur, and salmon skin. Ainu clothing worn only on special occasions such as festivals is boldly decorative, displaying regionally unique patterns rendered in cutouts and embroidery, passed down from mother to daughter. Like many indigenous decorations, these represent a visual language, whose curves and kinks comprise real beings of the animistic world, linked in patterns to either invite or ward off spirits.

Assimilation policies that changed the hunting, gathering, and fishing lifestyle of these people also prohibited the speaking of their language. Only a century ago, all Ainu knew their mother tongue, an ability that has fallen to less than one per cent—a precipitous decline putting Ainu on the endangered-language list. (Of the 7,000 or so languages still spoken worldwide, one dies every two weeks; with a starting number near 9,000, we've entered a time of accelerated attrition.)

Back at the lake, after a short traditional Ainu prayer ceremony to thank the kamuy (he did not grow up speaking Ainu, but had to learn it), Kengo now explains, in English, another local natural phenomenon—moss balls, or marimo. A green algae that occurs in high-latitude lakes across the Northern Hemisphere, marimo can, depending on local conditions, exhibit one of three growth forms: attached (strands), free-floating (plankton), or colonial aggregate. Lake Akan, fed by geothermal hot springs, is the only habitat in the world where aggregation-type marimo grows in perfect, preternatural spheres up to volleyball size. To celebrate their uniqueness, shops in town make green tofu balls, candy, and other trinkets.

They also make owls in every size, shape and configuration to celebrate the local raptor. Blakiston's Fish Owl is Japan's largest species—an enormous bird. The Ainu name is kotankor kamuy—the spirit that protects. As our van heads back to town after our walk with Kengo, we spy one of these guardian deities sitting prominently and knowingly in a tree, looking down on the road.

As part of a cultural tour of Hokkaido, Leslie visited the Lake Akan Ainu with Tr Adventure Travel.