While the race was never known for its regulations, in its first year there were remarkably few
May 31, 2021 10:00 AM By: Keely Collins 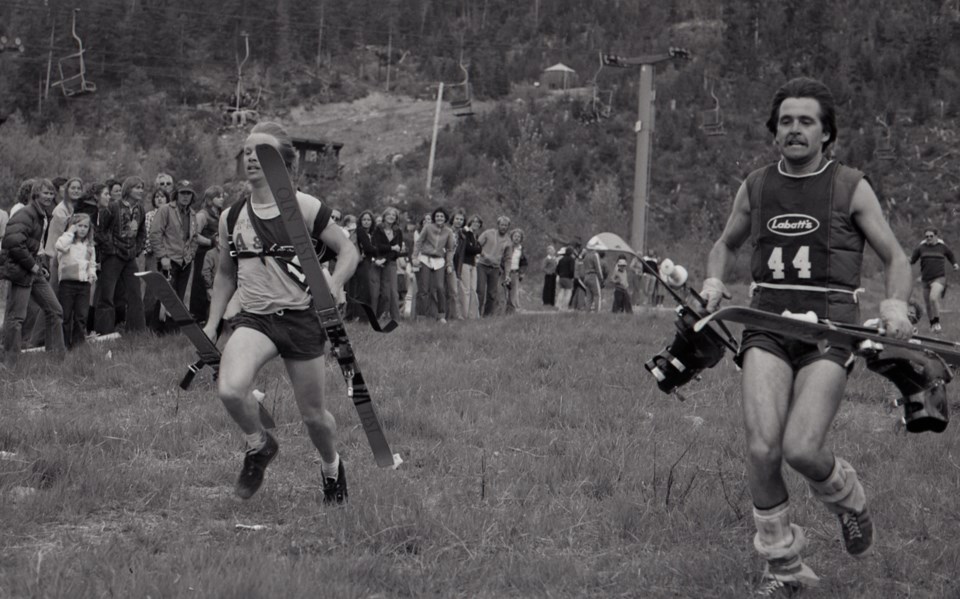 The Great Snow Earth Water Race was one of the many events that took place over the Victoria Day long weekend in Whistler during the 1970s and ‘80s. The event contributed to the influx of tourists that arrived every May to participate in the festivities. The race was created by Bryan Walhovd in 1975 as a community event aimed at attracting all skill levels.

The event took different shapes depending on the year, and was far from predictable.

In some years, the race had a cross-country skiing portion that required more team members, and in other years the race switched between Whistler and Blackcomb Mountains. The state of the course varied from year to year as well. In an interview with the museum, Bryan said that in the years he or other volunteers were unable to clear out the River of Golden Dreams prior to the race, it was like an obstacle course for the competitors. Similarly, he said that some years competitors complained about the unruly state of the trails for the running segment.

When the first race took place in 1975, there were more than 20 teams competing. Every team had to include both men and women.

While the race was never known for its regulations, in its first year there were remarkably few. The first year, the only requirement was that competitors reach the bottom of the ski hill with all of their ski equipment, but once the snow ended, how they got down the mountain was entirely up to them. The lack of regulations led to all kinds of opportunistic tactics. A few enterprising teams even used things like trucks and motorbikes to get the skiers to the exchange point.

Needless to say, after the first year a rule was added that competitors had to get down the mountain on their own two feet.

In only a few years the number of teams competing had nearly tripled: by 1978 more than 60 teams competed in the race (only 58 completed it), and from there the race continued to grow and attract larger and further-reaching audiences.

The races were full of mishaps and complications. Due to lack of government involvement, navigating traffic during the cycling portion could be quite complicated, and one year the Whistler Question referred to this endeavour as “an interesting experience.”

As the race became more notorious, by necessity it also became more organized. By the mid-1990s, matters of logistics and insurance made the race increasingly difficult to execute, and it came to an end.

The Great Snow Earth Water Race took place at the same time as Mayday Madness, a series of events organized by the Chamber of Commerce for community members and tourists.

Local sentiment toward the festivities of the long weekend was similar to what we see today: some looked forward to the fun-filled weekend, while others braced for what they saw as inevitable chaos. The events were geared toward different age groups, and some were more family friendly than others. They included everything from wind surfing to belly flop contests to mini-marathons and family sports.

If you are interested in learning more about the race, the Whistler Museum recently hosted a virtual speaker series with some of the original competitors and organizers, and a link to a recording of the event can be found on our website.

Keely Collins is one of two summer students working at the Whistler Museum this year through the Young Canada Works Program. She will be returning to the University of Victoria in the fall.