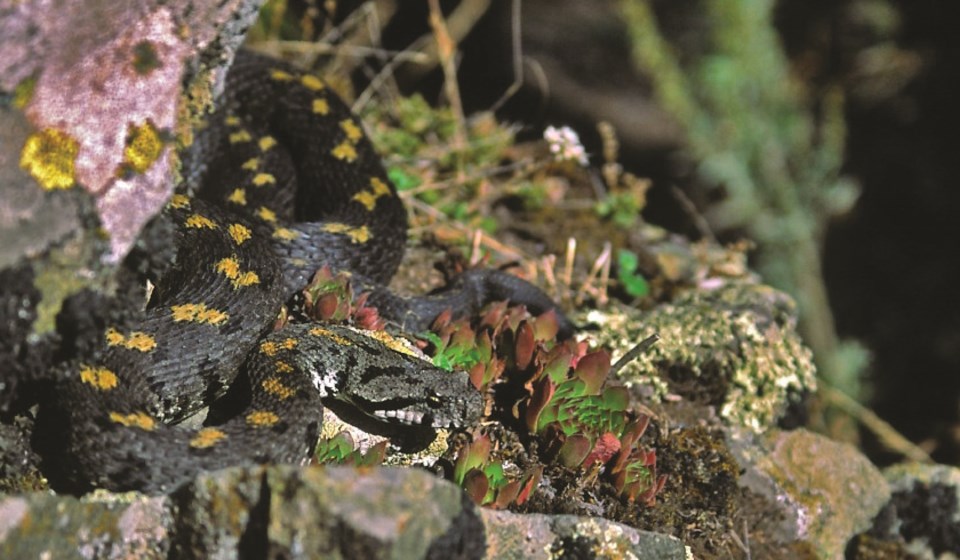 Can you spot the Armenian viper? Photo by Leslie Anthony

We were camped above treeline on a ridge in Shikahogh Forest Reserve. We’d driven up here in a parade of camo-bedecked vans that seemed less park vehicle than military conveyance—but what did I know? Only after debarking to a warning about land mines, a yard sale of rocket-propelled grenades, and Kalashnikov rounds crunching underfoot like peanut shells did it become clear: Shikahogh abutted not only Iran, but the Islamic Republic of Azerbaijan, the arch-enemy Armenia recently concluded a war with.

Call me old fashioned, but it just didn’t seem cricket to shell your enemies from, or in, a forest reserve.

Sidestepping the ordnance, I’d found the first Armenian viper of the trip, proving not only that this Holy Grail endangered species still existed, but that there was now bio-inventory work to do around protecting it. We’d quickly uncovered several more of the striking creatures, as well as a few other snake species. Giant Caucasian bumblebees fled our footfalls as we waded through opium poppies sprouting from the remains of flattened shepherd’s huts. The decimated buildings offered perfect habitat for rodents and perfect cover for snakes, and there were plenty of both: both Alex and Bob slung pillow-cases bulging with serpents that would provide DNA samples before being released; Kolya, forever stoic, toothpick in mouth, surveyed the scene gripping the wedge-shaped head of a massive Levantine viper.

As always, I found his casualness disarming. The Levantine was extremely dangerous, with a nasty disposition and outsized fangs that delivered high volumes of tissue-destroying venom. Though his friend, Ilya Darevsky, lost a finger to a Levantine and other colleagues had died from its bite, this one hung from Kolya’s hand like a rope he didn’t know what to do with. After helping him bag it I continued flipping through the mountainside junkyard, but noticed my hands were shaking.

Back at camp, someone had slaughtered a sheep. Bulging intestines uncoiled over the ground like spilled spaghetti, fecal contents oozing from several nicks. It seemed sloppy, but again, what did I know? Besides, we were all hungry and happy to khorovatz into the night.

After next morning’s Spartan breakfast of cold mutton and vodka served on the hood of a truck, we tromped off to “make photo” with the previous day’s catch. The Armenian vipers, gorgeous and velvety in the morning light, coiled cooperatively on lichen-spackled rock. Even the typically truculent Levantines seemed graciously photogenic. Not so a bright-red, non-venomous species Alex hectored up and down the road, trying to tire it out as you would a puppy; having none of it, the ill-tempered, 1.5-metre snake struck continuously, eventually nailing his left index finger—already grossly misshapen by a past viper bite—drawing blood and ire from Alex but barely a shrug from Bob or Kolya.

While photographing specimens, Bob and Kolya communicated in a truncated but well-rehearsed way. If an animal adopted a threatening posture while being posed, Bob might say Hmmm. Translation: This snake is trouble. Kolya would answer, Uh hmm. Translation: I see that. The dialogue didn’t shift in accordance with the situation’s gravity. Hmmm could just as easily mean That cobra is spitting at you. While Kolya’s Uh hmm—as he wiped venom from his camera lens—would still mean I see that.

Embodying turn-of-the-century explorer-naturalists with a fascination for foreign lands and exotic creatures, Bob and Kolya had described hundreds of new species between them, in some cases just in time to save them from extinction. But the rugged fieldwork behind such discovery came with a price. After the photo session, the pair trudged back to camp with bilious stomachs, a sign of impending doom. Soon, Bob was at my tent. “Got any toilet paper?” he begged. “I’m all out and just shitting water.”

It was the unsanitary sheep slaughter. While the tentmates engaged in a pas de deux of violent vomiting and voiding that left them crawling on hands and knees, I looked to escape the plague by climbing the peak above camp. I expected no more than a brisk walk, but in the illusory way of mountains the slope soon jacked up like a rogue wave, turning it into a scramble.

I’d sat atop the highest pinnacle, legs hanging in space, feeling like I could see anything from such a vantage. Into the centuries of warring cultures. Into the geological past and biological present. Into the cataclysm of commerce and an uncertain future wrote for various species. It was the kind of grounding perspective I’d been made privy to by answering the perilous siren-calls of this pack of lunatics. I reckoned I owed a lot to these generous-hearted herpetologists… until my stomach cramped and my bowels made a sound like bad plumbing.

The expedition’s final week was desperately long and hot, but we returned to Yerevan triumphant, carrying DNA samples from which could be gleaned information on gene flow between lonesome populations of Armenian vipers, offering prescription on how best to conserve the vanishing species.

In Aram’s apartment we slumped exhausted around a clattering, jury-rigged fan blowing maddeningly warm air. Recumbent on the sofa I’d occupied for weeks, I watched the others through fluttering eyelids shaded by a ball-cap: Bob hunched over his computer; Levon on his phone and smoking; ditto Aram #1—while also digging through the latest pot-load of crayfish he was certainly propelling to extinction…

I awoke to a commotion near my feet—Kolya chasing an escaped viper. Flushed from the warmth of wires feeding the fan, it had sprung toward the couch where I slept, attempting to climb it. A normal person—perhaps myself some weeks ago—might have jumped in alarm. But sudden movements are never a good thing with snakes, and I knew the crew would deal with it. And if not? Well, there was little to be done.

I pulled my hat back down and drifted off.

For Parts I, II and III of the Armenian viper caper see piquenewsmagazine.com Aug, 2, Aug 15 and Aug.27. Part IV is the final instalment.

Leslie Anthony is a Whistler–based author, editor, biologist and bon vivant who has never met a mountain he didn’t like.