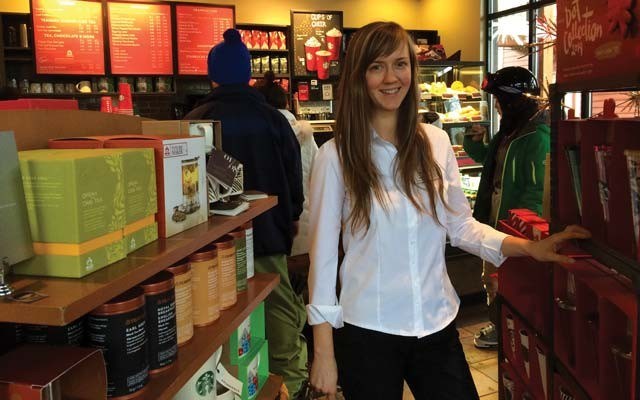 Maven of the Raven's Nest: Kristine Leise will leave her post as manager at the Creekside Starbucks to take over the re-invented Raven's Nest on Whistler Mountain — Whistler Blackcomb's first dining option dedicated to plant-based food options. Photo By Clare Ogilvie

Kristine Leise is very excited. That emphasis required for a woman known to be generally excited about everything from snowflakes to the shape of clouds to seeing an old friend, a person whose natural positive vibes escape with the ease of the sun's radiation. Today, however, the Latvian native and six-year Whistlerite is practically vibrating with news of changes underway for the mountain's venerable Raven's Nest restaurant.

The nondescript, two-storey chalet atop the Creekside gondola, known as but a bathroom pit-stop to most, will see a décor facelift this season and an ethical makeover to boot: it will become Whistler Blackcomb's first dining option dedicated to plant-based food options. Not only is this welcome news for Leise, a practicing vegan, but also a dream-come-true vocation: this was her idea, and she'll oversee and manage the hopefully successful experiment.

As a dual mission to increase choice in an age of broadening food preferences and further its own sustainability agenda, the mountain couldn't have picked a better steward.

After working there as a barista, Leise went on to manage Starbucks Creekside for the past three years, a licensed locale under the Whistler Blackcomb Food and Beverage banner. In that time she turned another cookie-cutter franchise experience into the caffeine-dispensing version of television's Cheers, where baristas greet the regulars and vice versa, and your drink is often prepared before you even order it. Despite the inevitable seasonal turnstile, Leise likens her staff — longstanding by Whistler standard — to "a family." It's one of the reasons self-employed types post daily shifts there; I've personally written three books in its quasi-homey environs.

"Starbucks was doing OK when I took over," she recalls, "but I made some small changes that improved the look and feel. We also created a great team, one that cared about values and bringing in more environmental practices. For example, through vigilance and raising standards up to meet our values, we reduced milk waste from 30 per cent to around five per cent."

Visualize tossing out 30 of every 100 litres of milk you use and you understand what a huge save for both mountain and environment that represents. There was more. Leise started a popular "grounds for gardens" program, putting labelled bags out in the shop for people who didn't know about this option. She pushed to use all pastry before its shelf life was up, even if it meant giving it away as samples instead of throwing it out. And though recycling is key to her objectives and a fortuitous cornerstone of WB's zero-waste initiative, getting customers to think about their use of paper cups was the big one. More sit-ins here use porcelain and more take-outs bring travel mugs than any other Starbucks in Whistler. Each of these counts as a paper cup averted, and wall signs announcing how many cups are saved each week (hundreds) and year-to-date (40,000 or so) further encourage people to contribute to the tally.

With this kind of track record, Leise was often offered other manager opportunities in WB's F&B world. Though personally happy with her accomplishments and always up for a new challenge, she'd always turned these down feeling they wouldn't fit her personal ethos of seeing the world reduce its suffering-and-carbon-heavy meat consumption. Until a supervisor position came up at Raven's Nest.

"I'd waited two years for that to open up because I had this idea for a plant-based food operation, but wanted to take the position only if there was opportunity to try something different. Whistler Blackcomb has all these great environmental initiatives, so why not dare to change people's attitudes by taking a risk?"

When Leise outlined her idea, WB's Paul Street thought they might be open to it. So, with what was likely vibration-level excitement, Leise took the position and presented her vision to the senior leadership team. At first they saw it as putting in a few vegan items and seeing how it worked out, but as the conversation about WB initiatives in the areas of energy, waste and sustainable food sources evolved, they were eventually poised to open with an 85 per cent plant-based menu, with "carnivore approachable" asterisks on certain items. "That means they can request the two meat items we'll carry that aren't on the menu, and we'll make it for them. Even the non-plant-based food has been tweaked to be more sustainable: organic Pemberton beef, organic milk, local organic cheese. If people are super-stoked with the plant-based stuff, we may just lose the other."

The future is to move toward more non-processed options involving whole foods — raw-food juices and non-dairy smoothies. "It's also going to be a proper coffee shop with non-dairy mocha and lattes and hot chocolates," Leise continues, "with a few breakfast items like savoury danishes, muffins and scones made in-house so people can skip the base breakfast lineups, upload, do a run, then stop in for a nice snack in a beautiful, spacious overlook. Most people don't realize Raven's Nest is all windows looking out over the valley. We're also creating a better atmosphere with artwork from local artists."

Leise is indeed excited, but acknowledges nothing would have happened without the blessing and trust of Alpine General Manager, Sean Richards, who stands strong behind the initiative, and WB executive chef, Wolfgang Sterr. "He looked over the original menu to see which items could change to plant-based. So people don't lose out on the "sandwich" idea, they're now made with gardein™ (a line of healthy, tasty, plant-based food, slow cooked to have the taste and texture of premium lean meat), a more environmentally friendly ingredient packed with protein and energy."

Honouring her Starbucks staff model, Leise is bringing her longstanding lead hand, Mike Sousa, along. "When I hire people I'm looking to create a family. My dream is to recreate the feeling of all these family-owned places in the Alps," says Leise, who also hopes to fill some of Whistler's "gaps." "Like a place to have a gluewein or almond milk-chile-hot chocolate (that's right) on the patio before your last run."

Ultimately, Leise's excitement lies in both progress and realization: "I've talked to so many over the years about everything from their changing diets to lack of food options to how we don't have one place in Whistler where all our sustainable ideas come together, so the demand is there. Plus this is a major thing for WB, and I'm honoured they're putting trust in this idea. That puts them way ahead of the industry standard."

And that's something for everyone to be excited about.

The Raven's Nest will open December 13.

Rising number of Canadians ready to rethink country's relationship with the monarchy: poll
Mar 1, 2021 6:00 AM
Comments