Stand up for forests Friday 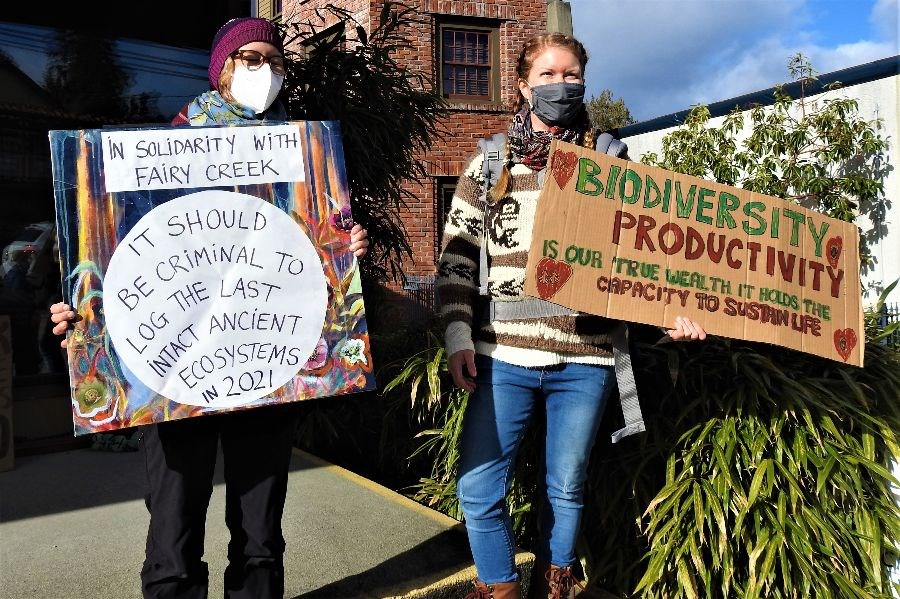 Forest March BC is slated for Friday, March 19. Forestmarchbc.com

I’ve written in this space before about how I wish we could harness the focus we have for all things pandemic to face up to and make a plan for dealing with the climate crisis.

Several months ago we learned about the provincial NDP government’s plan to address concerns about logging of old-growth and old trees, and while addressing this issue is not going to solve our climate-destroying actions it does speak to government’s desire to act on a concern that is important to many voters.

I admit I was heartened when I read the report released to the public last September—A New Future For Old Forests: A Strategic Review of How British Columbia Manages for Old Forests Within its Ancient Ecosystems.

The report had 14 recommendations that, if adopted, would significantly change the management of old-growth forests, and engages a process of government-to-government framework involving both the provincial and Indigenous governments.

So here we are six months later, and sadly, it looks like the province has done next to nothing on its commitments to protect old-growth. And so, despite the COVID-19 pandemic still dictating that people can’t gather to show their disappointment in the government, Forest March BC is organizing a day of protest this Friday, March 19.

“Forest March BC 2021 aims to ignite the political will necessary for transitioning into a sustainable new forest framework,” states a release.

“To help with this, the province-wide action is also highlighting the links between deforestation and climate change and will ask the government to declare a forest emergency.”

The day also aligns with the global Fridays for Future movement, in which youth continue to draw attention to the climate emergency.

As well, the Association for Whistler Area Residents for the Environment and The Whistler Naturalists will together host An Inside Look at Forestry in BC and Whistler, an event designed to educate our community on best forestry practices and the realities of forestry in B.C. now and into the future.

You can also show your support on social media by posting a photo of yourself standing with a tree under the #TreePoseChallenge. Don’t forget to add the hashtags: #treeposechallenge, #fridaysforfuture, #worthmorestanding, #marchforoldgrowth, and #forestemergency.

And you could also write to local MLA Jordan Sturdy about the issue. There will be a letter-writing blitz on Friday at noon.

We know from the work of AWARE and the Whistler Naturalists that pockets of spectacular old and ancient trees remain throughout the Whistler area. Coring trees around Whistler has shown that our surrounding forests are home to trees that are 600, 800 and in some areas more than 1,000 years old. Whistler’s oldest documented living tree was found as part of the 2014 phase of tree coring projects, a 1,200-plus-year-old yellow cedar found in the Callaghan Valley.

Last week the Wilderness Committee, Sierra Club BC and the Ancient Forest Alliance released a report card which graded Premier John Horgan’s NDP government in five key areas on the report, failing them in all but one category.

They give a “D” for the logging deferrals the government introduced last fall. The three groups explained that the province only deferred logging in less than one per cent of what’s threatened in the province. They want the government to immediately defer logging of all at-risk old growth. Indeed, they went on to say that the plan itself was somewhat misleading, as it stated that 353,000 hectares was to be protected but in fact much of the area was not old-growth at all, or it was already protected.

“Government promised a ‘new direction’ for old-growth forests and then spent six months dragging its heels and refusing to protect the most endangered stands,” said Andrea Inness, campaigner for the Ancient Forest Alliance.

Of course, the report is outlining a huge change in the way our forests are managed and considered as part of our ecosystem, and this will take time.

As you consider this and plan how you will stand up for our forests this Friday, consider these words from Grand Chief Stewart Phillip, who said in a release the majority of old-growth forests that are at risk remain open to logging, including vulnerable, biodiverse areas like the Fairy Creek watershed.

“What governments and corporations need to do is to take a step back and view old-growth forests not as commercialized products to be harvested and sold, but as the bedrock foundations of a healthy, biodiverse environment that First Nations have been stewards over since time immemorial,” he said.

“Old-growth forests help sustain our livelihoods and possess incalculable cultural and spiritual value that is far from pecuniary.”