THE OUTSIDER: (Re)testing the waters of MTB racing, virtually 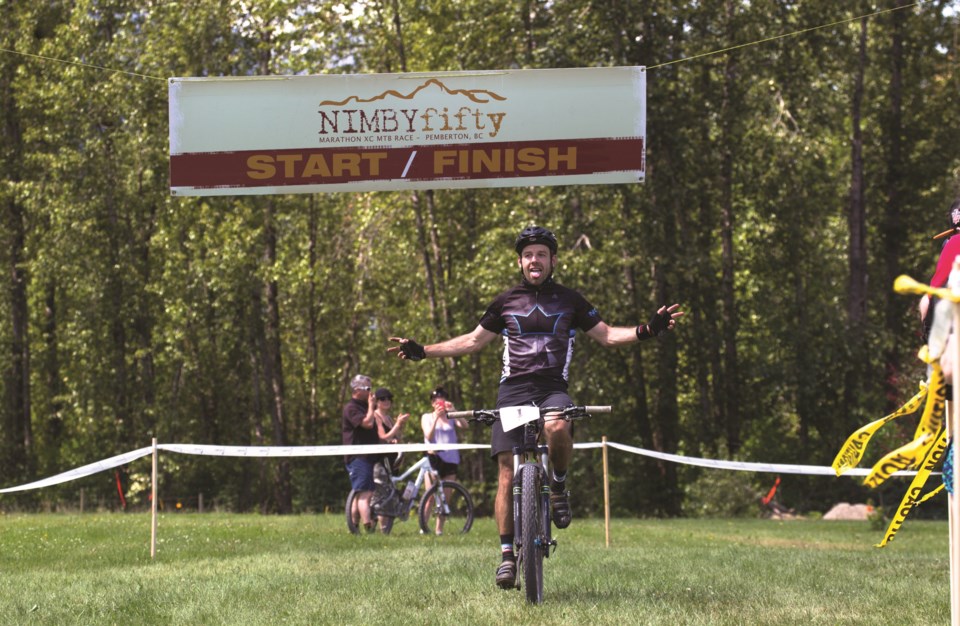 The Nimby Fifty no longer runs, but is spiritually succeeded this year by the Pemby 50 in a virtual format. Photo by Vince Shuley

I really wish I’d raced the Nimby Fifty when it was around. Not that I’d expect to do well against the field of iron-lung competitors in the Elite division, or the amateur divisions for that matter. It would be more about finding some other non-XC racer (who also had little business being there), chasing them down and not coming dead last. If you’re a regular reader of this column, you’re probably familiar with my tendency to put my body through the proverbial meat grinder once in a while. But other than Darkside Skimo Race and the odd Toonie race, I’ve always been a bit hesitant to throw my hat in the ring for the mass-start suffer fests.

I’ve used all the excuses. Back when I was covering sports for the Whistler Question I’d say I couldn’t take part because, “I have to be at the finish line to take photos and interview the winner.” That was only half true; if I’d applied myself and been organized I could have figured it out. The other staple excuse I’d regularly employ was “I don’t have the right bike for that kind of race.” Also half true; my long-travel enduro bike wasn’t going to win any hill-climb battles, but it would have gotten me over the line and been a dream for the descents. Mostly, it came down to just not wanting to race anymore. To do well in cross-country races, you have to train hard. You should be on a road bike doing intervals a few times a week and hiring the services of a personal trainer. I’d raced cross-country in my youth in Australia and even got some half-decent results for a few years, but I didn’t want racing to consume my recreation anymore. When I started experiencing Whistler summers, that pretty much became a self-fulfilling prophecy having access to the likes of the bike park and the local trail system. Whistler races were these massive epics designed by event master Tony Horn, which had similar, slightly toned down renditions up and down the corridor in later years.

Then COVID-19 happened and all races were shitcanned for the foreseeable future. But with technology such as it is, virtual races quickly became a thing. Complete the circuit in a certain timeframe, log it with your Strava or other GPS tracking device and send in your results. There is big potential for margins of error, mistakes with tracking (Strava is notorious for this) and intentional data manipulation, which is why most of the events that employed this virtual format are grassroots with results being secondary to everyone having fun.

It’s not the same, though. Mass start races have a way of giving you an adrenaline-fuelled boost of speed, physically pushing yourself past the pain barrier for a chance to overtake that gal or guy you’ve been chasing for the last 45 minutes. There’s a camaraderie between racers; you might briefly “hate” each other as you both attempt the final anaerobic sprint across the line, but there’s nothing but respect once you’ve caught enough breath to fist bump and coherently say “good race.” Then there’s the best part of any race: the party. No need to describe how great it was getting together in large groups and celebrating these sorts of events. I miss it, too.

We’ll probably have another summer devoid of mountain bike races, but that doesn’t mean we can’t gather a couple of bubble friends, push ourselves on a longer ride than usual and have a few beers on the tailgate. This is what I intend to do next week for the Pemby 50.

Described as “50kms of Pemberton singletrack completed in one day, professionally designed to get that suffer-grin going,” the Pemby 50 is not a race, but more of a motivational ride to fill the gap left by the usual spring mountain bike races. There are animals in the Sea to Sky who would do this as warm-up for their summer solstice mega ride, but for the rest of us, 50 kilometres and 1,850 metres of elevation gain on Pemby’s prime singletrack will kill the legs just fine.

Even though you can attempt this ride at your own pace and even stop at the lakes for a swim, preparation is key if you intend to complete all 50 kilometres. This is what most mountain bikers would refer to as a “two-sandwich ride.” Add to that LOTS of easily digestible snacks and a handful of energy gels to alleviate the inevitable bonking on the last couple of climbs. Being Pemberton, it will likely be hot. I carry roughly two-and-a-half litres of water in a bladder in my backpack and fill my water bottle with electrolytes. Packing the relevant tools and parts for the (also inevitable) mechanical mishaps is key as well.

The best part of the Pemby 50 is that everyone has nine days from May 22 to May 30 to complete it (including two full weekends), though the route has to be done all in one day.

Vince Shuley will be telling his legs to shut up. For questions, comments or suggestions for The Outsider email vince.shuley@gmail.com or Instagram @whis_vince.

THE OUTSIDER: The inescapable convenience of indoor cycling
Apr 6, 2021 10:00 AM