Coming from the heart of Double Double Country in southwestern Ontario, you can imagine my surprise upon arriving in Whistler nearly two years ago only to discover there was nary a Tim Horton's to be found.
May 21, 2014 10:00 PM By: Brandon Barrett 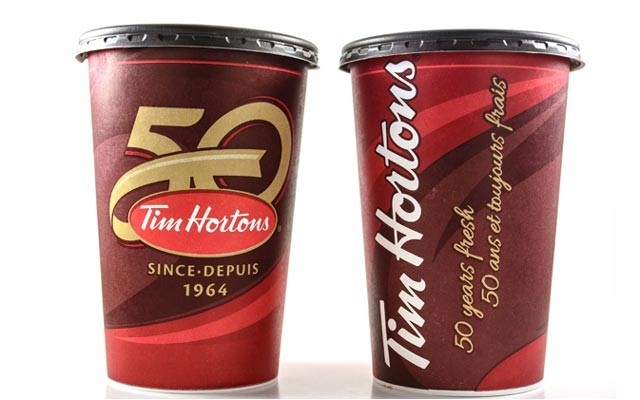 HAPPY BIRTHDAY As Tim Horton's turns 50, the iconic Canadian brand will have to deal with an increasing number of competitors and shifting consumer demands to stay relevant. photo from <a href="http://shutterstock.com/">Shutterstock.com</a>

Coming from the heart of Double Double Country in southwestern Ontario, you can imagine my surprise upon arriving in Whistler nearly two years ago only to discover there was nary a Tim Horton's to be found.

How would I ever satiate my daily cravings for cheap and milky coffee, I thought? When would I get the chance to partake in the glorious national pastime that is Roll Up the Rim? Would I ever again know the sweet, sweet sting that comes from cutting one's lip on Timmie's dreadfully designed coffee lids?

Of course, the reasons why our little resort town is without the trademark brown and red have been well tread by now. Going by the resort grapevine, the franchisee with the rights to all Timmie's locations in the Sea to Sky wants one in the resort, but only if a drive-thru is included, a feature that's not supported by municipal zoning or available retail space. There's also been some grumblings that adding a Tim Horton's to the village would take away business from the other mom and pop cafés in town, but as the international chain celebrated its 50th anniversary last weekend, one can't help but wonder if it's the iconic Canuck brand that should be looking over its shoulder.

I'm not suggesting that our beloved Tim Horton's is going anywhere anytime soon. Far from it. There are probably dozens of CEOs across the country who would happily sacrifice their first-born child for the kind of consumer loyalty Tim Ho's enjoys. A study by research firm Ipsos Reid last year ranked Tim Horton's as the sixth most influential brand in Canada after all, but as more competitors vie for a piece of the $4.6-billion pie that is the Canadian coffee business, one has to wonder if Tim Horton's — a company that's not afraid to capitalize on customer nostalgia — can evolve with the times.

That's not to say it hasn't tried. As more and more of the country relocates to urban centres — that bastion of sugary lattes and indie coffee shops — Tim Horton's has tweaked its populist image to cater to a new generation of consumers, to varying results.

The store has expanded its line of frozen drinks in an effort to appeal to the higher-end, frappuccino-drinking set, and began offering larger submarine-style sandwiches that have since been yanked from menus.

Last year, the company discontinued another 24 items along with the removal of all Cold Stone Creamery ice cream counters, at a cost of $19 million.

The company only introduced debit service to the majority if its 3,600 Canadian stores four years ago, effectively removing itself from the retail Stone Age. But that move, along with adding a range of food items that take longer to prepare, has presented a new challenge to stores' operations with longer lines and a backlog of lunch traffic.

And while Timmie's is still top dog in the Canadian quick-service sector, McDonald's has been nipping at its heels now for some time, doubling its market share to 16 per cent over the last decade. Chalk that up to lower priced food products and an aggressive campaign to steal Timmie's drinkers with the national rollout of its coffeehouse-style chain, McCafé, in 2011.

Starbucks is no slouch either when it comes to the Canadian coffee wars. With one lonely Canadian store opened in Vancouver in 1987, the Seattle-based chain has expanded to more than 1,000 outlets nationwide, with plans to open 100 more this year.

All this is before you begin to factor in the considerable influence Millennials have on the coffee industry, with their demands for more healthy and ethically-sourced products, as well as the growing popularity of at-home, single-serving coffee machines like Keurig, Tassimo and Nespresso that are keeping java lovers on the couch.

And with new company president Marc Caira's unrelenting desire for expansion, announcing plans in February to open more than 800 new locations across Canada, the U.S. and the Persian Gulf over the next five years, one would hope the coffee giant isn't spreading itself too thin. It was only last summer after all that some of the company's investors were calling for Tim Horton's to scale back on its aggressive $664-million expansion into the U.S. over the last 10 years after the brand largely failed to take hold in a saturated American market.

So, half a century after its first store opened out of a former auto garage in Hamilton, ON., here's hoping Tim Horton's doesn't suffer from the standard mid-life crisis, but ages gracefully into its Golden Years along with the rapidly changing coffee industry.