A couple of years ago, I was cleaning out my childhood bedroom and found a project from elementary school. The task was to write an autobiography, including a list of ambitions.
Feb 21, 2018 5:00 PM By: Megan Lalonde 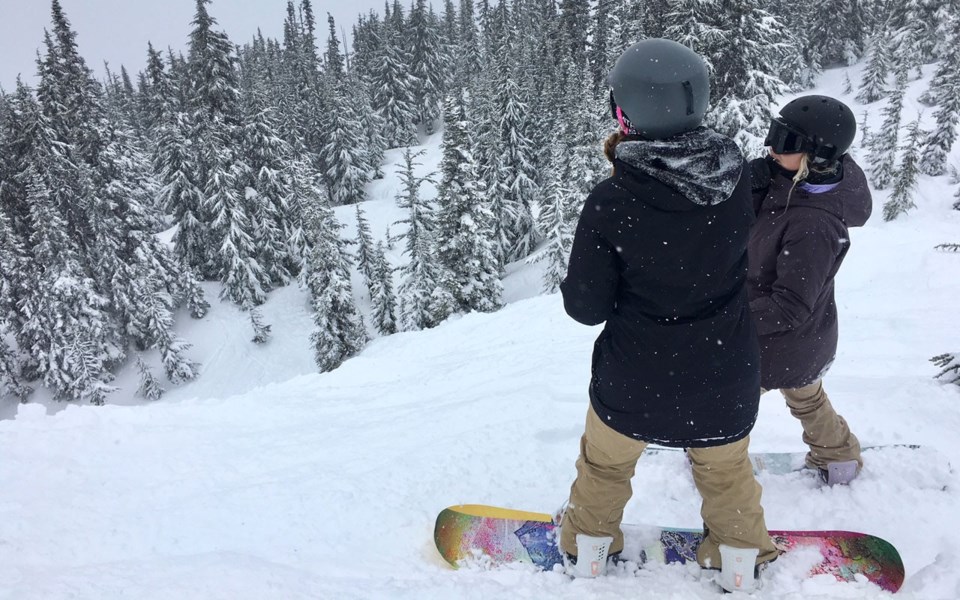 KEEP GIRLS SNOWBOARDING The Olympics have a responsibility to inspire. They failed when it came to women's slopestyle snowboarding. Photo by Megan Lalonde

A couple of years ago, I was cleaning out my childhood bedroom and found a project from elementary school.

The task was to write an autobiography, including a list of ambitions. My approximately-10-year-old self wrote that I wanted to go to the Olympics, for hockey or horseback riding. Or both.

Looking back now, that goal was completely unrealistic (for me). Earning a spot at the Games is a superhuman accomplishment achieved by a tiny portion of the world's population; it's one that comes after years of gruelling work and determination, not to mention a decent dose of opportunity and luck.

But at the time, I truly believed it was an achieveable goal, if I set my mind to it.

Part of that belief came from attending summer hockey camps run by members of the national women's team — legends like Cassie Campbell, Jayna Hefford, Lori Dupuis and Vicky Sunohara. I watched them compete at their best to win gold medals, and was inspired to one day do the same. While my gold-medal dream may have died off, witnessing their passion, talent and commitment had a lasting effect: it helped develop a strong work ethic and instilled a lifelong love of sports.

Partly because I spent most winter weekends at the rink, I didn't learn how to snowboard until I was 18. While it has since turned into a big part of my life in Whistler, it's needless to say I won't be going to the Olympics for that sport, either.

But after watching the women's snowboard slopestyle finals at the PyeongChang Olympic Winter Games last Monday, Feb. 12, I feel for all the young girls who still have that Olympic dream, and the athletes who were poised to accomplish theirs.

To recap: due to high winds, whipping up to 10 metres per second, Sunday's qualifying round was cancelled altogether. The International Olympic Committee (IOC) and International Ski Federation (FIS) decided to delay Monday's final by over an hour, then cut it short, from three runs to two. The alpine skiing events scheduled that day were cancelled.

When the final did get underway, the Associated Press counted nine of the 50 runs as clean. No rider landed two clean runs.

Some didn't even last to see the final: Australian Tess Coady tore her ACL in a fall during training — an accident she blamed on high winds in an Instagram post. Germany's Silvia Mittermüller needed surgery after catching a wind gust in her final practice run and tearing her meniscus, though she still competed and managed to finish 26th.

I feel awful for the athletes who've spent years working to make it onto the biggest stage — an opportunity to showcase their sport to millions — only to lay down subpar runs. Instead of showing off their best, the conditions meant most were just trying to make it through the course safely.

Several athletes have since admitted they were scared to compete that day. Winds that strong make hucking yourself several metres into the air even more dangerous than usual.

"I'm just pretty disappointed with the organizers to make us ride in these conditions," Canada's Spencer O'Brien told CBC Sports following the event. "When our safety (is) involved, the riders need to have a say."

In a statement, the FIS said their jury, "monitored the weather conditions closely throughout the day, including consulting with the coaches, and considered it was within the boundaries to stage the competition safely... FIS always aims for the athletes to be able to stage their best performances, which some athletes have expressed was not the case today, but the nature of outdoor sports also requires adapting to the elements."

While I'm not familiar with all the factors behind the decision to proceed with the event, I can say that if I was 10 years old, intrigued by the sport, I don't think I would have been inspired to compete at the Olympics. I think I would have been scared away. If I was watching women's snowboarding for the first time, that event wouldn't have motivated me to keep following it.

Of course, there were silver linings, like watching Laurie Blouin win a silver medal after landing in the hospital earlier in the week, or seeing American Jamie Anderson defend her gold. The athletes did the best they could in the circumstances they were given, and it was impressive and commendable.

But they, and the sport, deserved better.