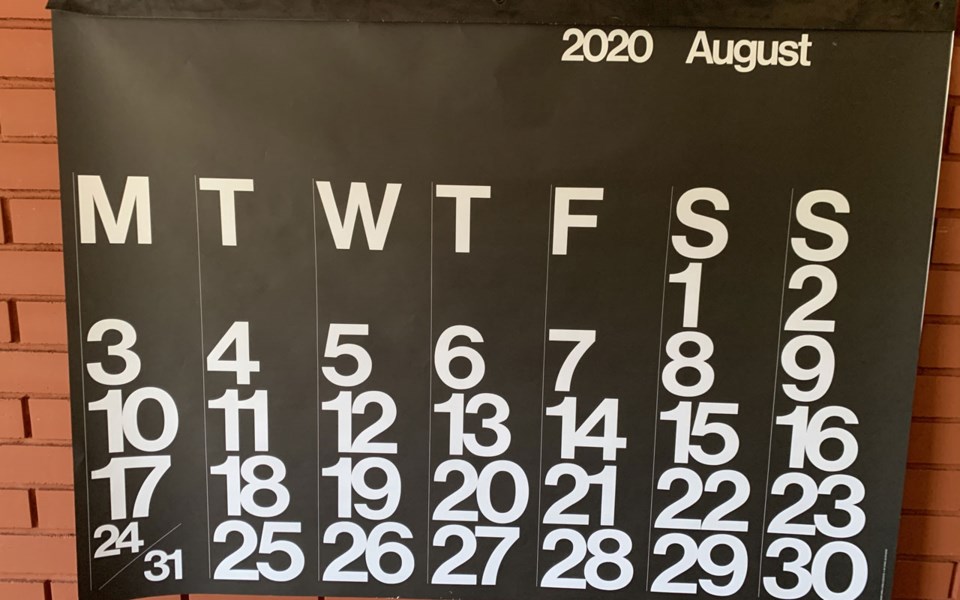 There are few things my wife loves more than calendars (myself included, quite possibly).

Our house boasts two calendars that are normally chockfull of events, and even our living room’s visual eye-catcher is a 1.2-by-0.9-metre black and white Stendig calendar. There’s a separate wall calendar for reoccurring dates, too. She has more datebooks and agendas than I can count, and we’ve already ordered, received and inputted all of our important events into our 2021 editions.

But she took down the bright, cheerful, floral Rifle Paper Company calendars—row upon row of blank boxes were a droning reminder that there’s not much to look forward to these days.

We’re generally happy being homebodies, but month after month of a reality that anytime either of us uses the car, it’s an occasion is a little tough to take. We have the privilege of being in a better situation than most, too, so it’s almost unbearable to think of how social animals cooped up in darker, less comfortable spaces are faring. If this is you and you’re finding ways to get your ya-yas out responsibly, you deserve the Order of Canada at minimum. Kudos and thanks to you.

Being, of course, cognizant of the fact that we’re trying to do our small part to head off a global health crisis, it’s started to become more challenging as the weeks have dragged on. Maybe the novelty is starting to wear off as some of the benefits, such as enjoying hot, homemade lunch every day and pushing snooze a couple more times before starting work each morning, just become parts of the new normal. As we approach the end of August, there’s the overhanging dread that the whole summer has been kind of a bust without any of the traditional beach day, carnival, or outdoor concert fun.

Then throw in the realization that it might be, well, a while before things start to truly return to “normal.” Development and distribution of a vaccine has long been considered the benchmark of when large-scale events could start happening again. But the fastest vaccine development, from collecting viral samples to licensing a drug, still took four years and was created to combat mumps, according to National Geographic.

“A year to 18 months would be absolutely unprecedented,” Peter Hotez, dean at Baylor University’s National School of Tropical Medicine, said in the April 10 story. “Maybe with the new technology, maybe with throwing enough money on it, that’ll happen. But we have to be really careful about those time estimates.”

How long do we have before we start to see serious noncompliance, though?

The impatience is clear all around: there’s impatience to socialize, to reopen businesses, to go back to the “Before Times” at a juncture when several jurisdictions are experiencing the worst new case count numbers of the entire pandemic. And if there’s no real end in sight, it’s understandable to be overwhelmed by a wave of futility.

There are those who never were going to abide by whatever precautions are recommended for whatever reason, and there are those who’ll likely continue to hermit even after it’s OK to start getting back out there. But what of the mushy middle, though?

Anecdotally, it’s clear to see a sense of invincibility in some segments. There’s an acknowledgement that there’s a pandemic going on, that some precautions need to be in place… but they can have a get-together because it’ll be fine. What could possibly go wrong?

There could, on the flipside, be a sense of inevitability: “If I’m gonna get it, may as well get it over with!” But that, of course, ignores how little we know about the long-term effects and whether getting COVID once bars the doors to coming down with it again for some length of time.

What’s not working? On the one hand, here in B.C., we’ve been fortunate to have avoided a government-mandated blanket lockdown and have had to work within rigid guidelines instead. Challenging, for sure, but not impossible.

Still, a group of yahoos saw fit to march through Downtown Vancouver and bemoan the province’s tyranny.

Those that locked down to a greater extent seem to have opened too soon, so any positives, such as those experienced on the prairies, have evaporated.

It just goes to show the importance of both hope and human connection. There are only so many experiences that can be Zoomed, and even then, it gets pretty tedious pretty quickly.

I’ve had countless conversations where I’ve been asked when I think certain milestones are going to happen, like the second wave or the end date, but it’s a frustrating discussion to have: it’s something that experts can’t nail down with certainty, as it’s not like the virus is operating with a ticking clock, trying to rack up as many kills as it can before the buzzer.

I get the reason for asking, though.

We all need a glimmer of hope to look forward to rather than years and years of proverbial winter. And not the good kind that brought us here, either.