Given the headline and its Mariah Carey reference, coupled with the recent passing of Valentine's Day, you could certainly expect this column to be something mushy, possibly gross and definitely containing too much information. Nah.
Feb 17, 2016 5:00 PM By: Dan Falloon 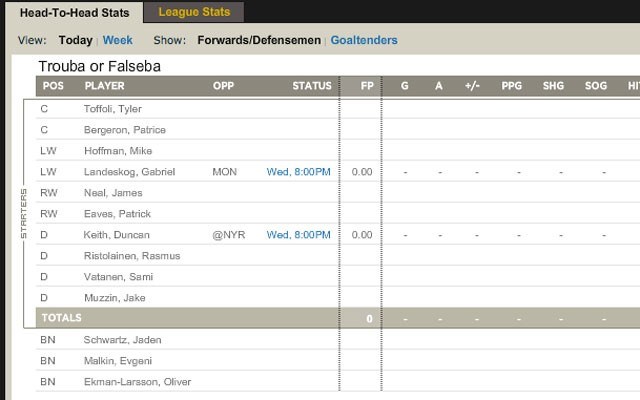 Given the headline and its Mariah Carey reference, coupled with the recent passing of Valentine's Day, you could certainly expect this column to be something mushy, possibly gross and definitely containing too much information.

That's not my style.

This fantasy has to do with the 16 NHLers I've assembled through Yahoo as part of Trouba or Falseba (a delicious pun on the name of Winnipeg Jets defenceman Jacob Trouba if I do say so myself).

My colleague Braden Dupuis also recruited Brandon Barrett, former Whistler Question intern Eric Thompson, another buddy here in town and five of his own friends and family members from back home in Saskatchewan to create the Saskatchalumbia Hockey League in advance of the 2015-16 NHL season.

It had been a few years since I'd jumped in a pool — when I was in high school, I was granted my own team in a league my dad was in after a couple years as his advisor.

My dada and I drafted in person in my neighbour's basement, with pens and papers, rustling through notes and moaning loudly if our teams weren't coming together as planned. The other owners, however, were all middle-aged fellas and most worked together at an insurance company. We set our lineups for the week over email, so the draft was pretty much it for my interaction with the guys. Despite my tender age, though, I wasn't patronized and was perceived as just as much of a threat to win as someone who'd been in the league for years. (And one year, I pulled off a second-place finish and won my money back.)

A decade later, technology has advanced and we can track our teams using an app on our iPhones. Naturally, as the hands-on managers we are, we check on our clubs when we're hanging out outside of work (or sneaking a look at the eastern games when we're working late).

I happened to be matched up against Brandon the week Pique had its Christmas party. I checked in on how my team was doing against, well, a team that was named in my dishonour and discovered that the newest Trouba-or-Falsebaite, defenceman Rasmus Ristolainen of the Buffalo Sabres, had popped in a hat trick against the Calgary Flames that night. I'd had a few glasses of wine at that point, so Mr. Barrett heard about the young Finn for most of the evening. The match ended closely at the week's conclusion, so he got his share of ribbing in at me before the week was through.

It's ultimately a silly game based on a silly game, but having something extra in common has brought us a little closer together. We can relate if our team is inexplicably having a rough week, or if our star player gets injured, but we can also celebrate the victories (provided we're not the team defeated). Plus we have the season-long storylines if we've made a trade with one another — I proudly took advantage of Braden's weakness on the blue line by sending him defender Torey Krug of Boston for sniper Tyler Toffoli of Los Angeles. I even wrote in his birthday card: "Oh, Toffoli just scored again."

We still have our other hobbies and commonalities one to one, but the language of the league is one we can all speak, in a way.

And it's welcome to have a reason to have a stronger connection to the league we love when our beloved actual teams are soiling the bed. My Jets seem settled into the league basement while Braden's beloved Montreal Canadiens have played horridly after starting torridly. It's a beautiful game that we'd follow anyway, but there's nothing quite like having an emotional investment to at least offer the possibility of feeling a legitimate high in a season where the best feeling is when your tanking team loses again.

We regularly talk smack, but our antics haven't (yet) reached the level of recently retired comedy The League, where the characters stop at nothing to win their fantasy football contests.

One episode featured the guys jetting from Chicago to Las Vegas for their draft — and the first one through airport security got the first-overall pick. Naturally, one character ends up getting tasered in his failed bid for the NFL's top player.

But, hey, getting the best guy isn't everything. I drafted eighth out of 10. And currently lead prairie-based Gordon Bombay's Ducks by a game.

The boys'll benefit, too, if I finish the year in first. Pitchers will be on me, fellas.