You know how when you were just a snot-nosed kid and you thought your jamoke of a teacher never noticed you conspicuously passing love notes to your hopeless crush in math class? Yeah, hate to break it to you, but he knew the whole time.
Mar 2, 2016 5:00 PM By: Brandon Barrett 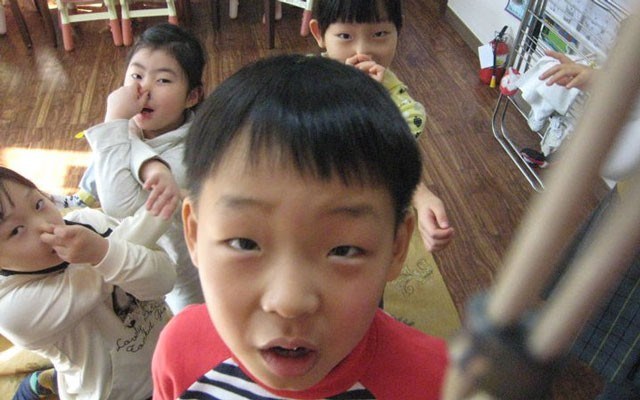 SCHOOLED Teaching can offer valuable lessons not just to students. Above, a kindergarten class monkeys around at a private South Korean school in 2011. Photo by Brandon Barrett

You know how when you were just a snot-nosed kid and you thought your jamoke of a teacher never noticed you conspicuously passing love notes to your hopeless crush in math class?

Yeah, hate to break it to you, but he knew the whole time.

You know how I know he knew? Because I too was a jamoke of a teacher for one strange and humbling year.

For the record, us teachers, we see everything. We see you boldly cheating on your first-period spelling test. We see you checking your Candy Crush score on that stupid smartphone your parents regreted buying the moment it left the store. And we damn sure see you surreptitiously lick that purple eraser you thought for some reason would taste of fresh grapes (for example).

This was just one of the many, many ways I gained a deeper appreciation for all the overworked, underpaid teachers who so valiantly put up with my angsty bullcrap for eight months of the year, every year, growing up.

But relating to my fellow instructors was not a primary goal for me when I decided to pack my bags and head off for the bustling industrial city of Changwon, South Korea back in 2010 as probably the most underqualified English teacher to ever grace the peninsula. Not that I didn't have command of my mother tongue, but I failed to grasp the nuances that would be involved in corralling a small army of hyperactive children who had about as much interest in learning English as I had in teaching it.

Truth is, the main reason I embarked on this ill-fated journey was because I wanted to see the world, not nurture its future leaders. I saw it as an opportunity to escape the frozen hellscape of an Ottawa winter and drink some cheap booze in a far-away place — all while getting paid pretty handsomely for my troubles.

And, boy, were there troubles.

Like the time one of my students lashed out violently at a classmate and I was faced with the decision of whether or not to tattle on him to the school's (Korean) vice-principal, knowing full well he was going to get a ruler across the hands if I did.

Or the aforementioned school-supply eater who legit SWALLOWED an entire jumbo eraser in the midst of an especially rousing game of blackboard hangman. (There was definitely no mention of eraser-based first aid strategies in the teacher's manual, I'll tell you that much.)

Or the time I was given the unenviable task of explaining puberty to a group of hormonal 14-year-olds with a limited grasp on the English language.

"Well, when a boy gets older, his voice gets deeper and his shoulders get wider," I stammered, dreading what was about to come. "And, when a girl gets older, her body, well, it gets...curvier."

I could feel the blood rushing to my face, turning it a deep crimson.

"Teacher, what is curvier?" one of my suddenly ex-favourite students asked.

Against my better judgement, I made an hourglass shape with my hands. The girls shrieked, the boys mostly stared awkwardly at their shoes.

Then, a particularly forward young lady shouted, "Teacher, you is bad thinking! Pyuntae!" This loosely translates to "pervert," and is a term used liberally whenever the mere mention of anything remotely sexual comes up.

That's not to say I didn't enjoy corrupting the young minds of tomorrow. For the most part, the kids I had the privilege of "teaching" were like kids you'd find anywhere: funny, irreverent, smart as a whip, and brimming with potential. I didn't really feel the need to teach them nonsensical grammar rules, and, besides, the best moments were when we simply put down the textbook and just talked.

We dished about our favourite bands, our favourite foods, Canada, and, when I was lucky, I gave them a glimpse into a world beyond the 14-hour school days and crushing expectations weighed on them by a conservative society that is always, mercilessly, demanding more of them. (Sound familiar?)

It may not have helped them ace their next exam or get into that cutthroat college their parents were banking on, but in those rare moments they were allowed to just be kids, and I was allowed to be more than a teacher, but a friend. And, after all is said and done, that's a pretty damn valuable lesson to learn.