With the sweltering heat of late, I've started swimming in the evenings. I dive into water and race towards the dock. On the way back, I glide on my back, staring up at rich green forest and Whistler Mountain, basked in golden light.
Aug 15, 2018 6:00 PM By: Joel Barde 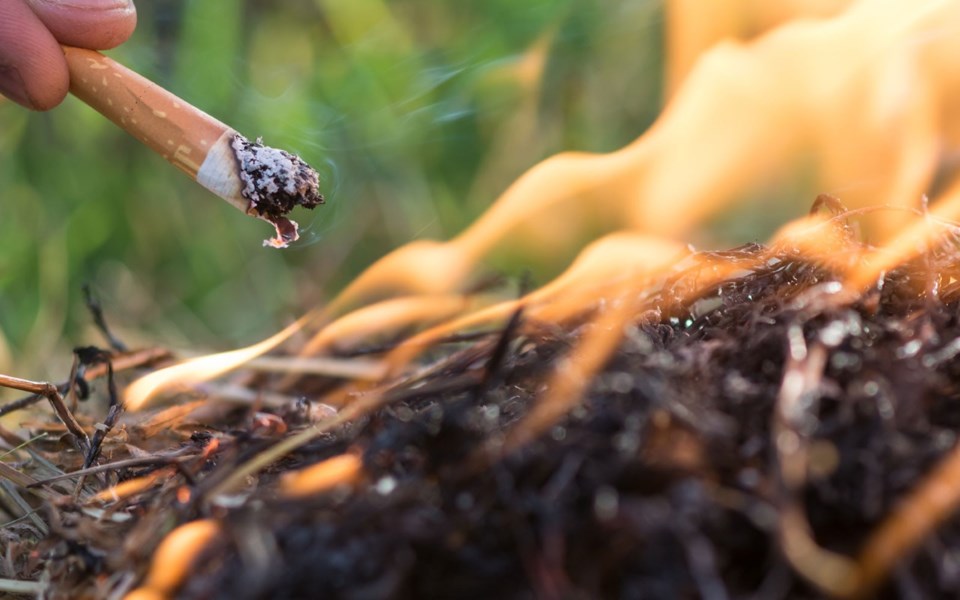 With the sweltering heat of late, I've started swimming in the evenings. I dive into water and race towards the dock. On the way back, I glide on my back, staring up at rich green forest and Whistler Mountain, basked in golden light.

Few things compare. My post-swim chills, however, are another matter, as more often than not, I see people smoking and throwing their butts on the ground.

As vile, unhealthy and foolish as smoking is, my objection isn't rooted in hysteria about secondhand smoke (we're outside, after all). It draws, rather, from a deep fear of forest fire.

People continue to be a leading cause of wildfires throughout B.C. According to the province, on average 40 per cent of wildfires are human caused.

According to Chris Nelson, of Whistler Fire Rescue Services, discarded cigarette butts are a significant concern, as this summer's extreme heat has dried out the combustible materials that surround our community.

"You get to a point where it can only dry out so much—and it's tinder dry right now," he explains.

In the last month alone, fire services responded to two small fires they believe are human caused, he says—by the washrooms at Lost Lake and on a log overhanging Alta Lake. Moreover, Whistler RCMP ticketed two drivers for discarding smoking materials out of windows.

It's difficult to overstate the danger of wildfire for Whistler Valley. The air, after all, is thick with smoke from forest fires, and a significant blaze burning near Anderson Lake has the communities of Ponderosa, McGillivray, and D'Arcy on evacuation alert.

With its popular chipping program, new early-detection forest fire system, and numerous fuel-reduction projects around the valley, I feel confident that some very smart people are doing their best to keep Whistler safe. No one wants to see B.C.'s crown jewel go up in flames.

I wonder, though, if the prohibitive approach that the municipality and its largest employer, Whistler Blackcomb, takes to smoking is the right tact. Though it offers ashtrays in the village, the municipality prohibits smoking in forests and parks. Whistler Blackcomb goes one step further, prohibiting smoking outright, on any of its properties, for both guests and employees. The decision was motivated by a desire "to preserve the pristine alpine environment our guests come here for," explained former Whistler Blackcomb CEO Dave Brownlie, when the new rule was announced in 2015.

I get it. Smoking doesn't mesh with the carefully cultivated image that Whistler wants to project to the world. We are a community of fit, kale-smoothie drinking outdoorsy people who run half-marathons before breakfast—we don't smoke.

But the notion that people abide by these decrees—that our guests, who come from more smoking-friendly jurisdictions—don't ignore them and find places to smoke is absurd. Nicotine is, of course, an extremely addictive substance, and people will continue to smoke, whether Whistler or Whistler Blackcomb likes it or not.

Yet rather than providing ashtrays and offering somewhere safe to do it, both entities seem to be pushing smokers to the margins, to the shadowy forested areas where it's most dangerous.

Other communities are recognizing the need to meet smokers halfway. This summer, Vancouver began distributing pocket-sized portable ashtrays to smokers, following the lead of other cities that have embraced them for years. Smokers can simply throw their butts in them, and then dispose of them in the trash.

With a glut of people who can't find housing and find themselves living in their vehicles on Crown land, Whistler would do well do adopt a similar program.

A change in policy, however, seems unlikely, and perhaps more than anything, it is incumbent on everyone who lives here and loves the mountains to educate people on the need to discard of butts responsibly. (Nelson recommends either smothering them with sand or pouring water on them, to make sure they're actually out, and then making sure they find their way to a trash can.)

Asking people to smoke responsibly is a difficult, awkward conversation to have—one that I've historically avoided.

But according to Nelson, it's essential. "If someone just throws a cigarette butt, it's your obligation," he tells me. "They (will) probably say, 'Oh man, you're right, I had no idea what I could have eventually done.'"