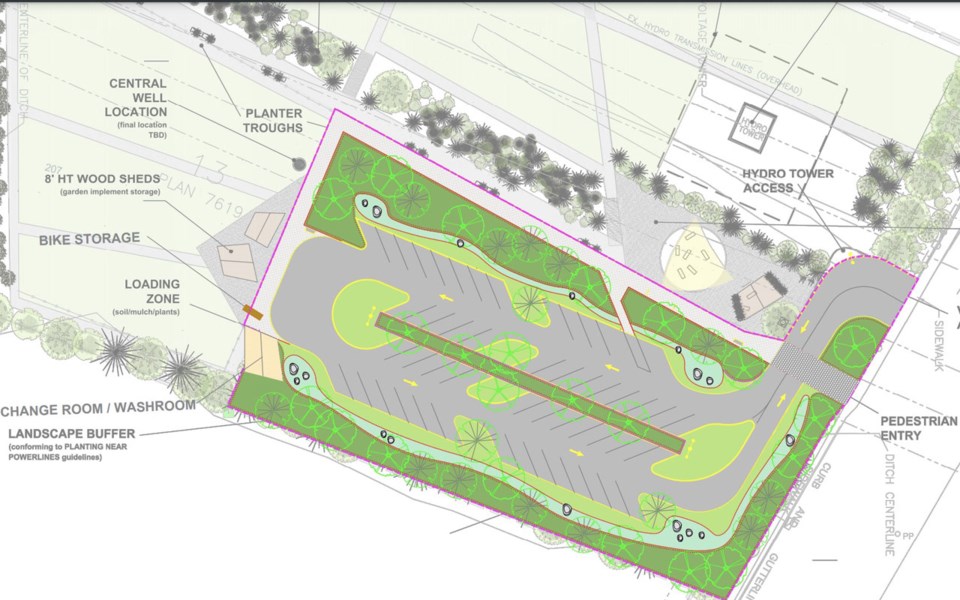 Map of the proposed Portage Road park and ride. Screenshot of Village of Pemberton council package

Village of Pemberton (VOP) council opted to take a second crack at funding for a park-and-ride facility on Portage Road.

At its Oct. 6 meeting, council voted to reapply to the Rural and Northern Communities Fund in the hopes of securing a 50-spot park and ride facility on Portage Road between Signal Hill Elementary School and the Crestline building at 1422 Portage Rd.

The first application to the Rural and Northern Communities Fund, made in January 2019 was denied in March 2020. However, in her report, senior community partnerships and communications coordinator Jill Brooksbank said the project scored well but fell victim to an oversubscribed program.

“They said it scored quite highly and they couldn’t give us a reason why it wasn’t successful,” she added during the meeting. “Simply, it was limited funds and we didn’t quite make it to the top of the pile.”

The new proposal incorporates feedback from the funders, encouraging a diverse use of transportation options and renaming the project to “regional multi-modal transportation hub” to reflect them. Among the additions are a small washroom/changeroom and covered bike storage.

The original cost was calculated to be roughly $1.3 million, while the project in this application is roughly $1.6 million. The project is eligible to be 100-per-cent funded, though the VOP would be responsible for maintenance, with those costs coming from the transit budget.

“I feel like we’re on this one. We got this one,” Mayor Mike Richman said.

Gilmore said the VOP hopes to apply for two projects. The first is for Pemberton Farm Road East improvements, which was previously unsuccessful through BikeBC program.

The second project is the Pemberton Off-Road Cycling Association bike skills park at the new recreation site. Council voted last month to pursue funding through the Community, Culture and Recreation Infrastructure Fund (CCRIF), which provides up to 73.33 per cent of funding. However, this new fund allows the VOP to not only hedge its bets, but also allows it to apply for additional features like lighting and a shelter.

Gilmore expects CERIP recipients to be announced first, so the VOP could decline the CCRIF if the other grant is successful.

Applications are due Oct. 29, so council will vote to officially sign off on the applications at its Oct. 20 meeting.

After a serious crash near Whistler involving a participant in the Hublot Diamond Rally Charity Challenge on Sept. 5, council discussed the VOP’s involvement in future events.

In recent years, the municipality has rented space at the Pemberton Airport to organizers as an endpoint gathering.

While the RCMP investigation is still ongoing, with the most recent update coming at the end of September that the force was reviewing dash camera footage, councillors said there was some reassurance that the participant was not at fault.

“I don’t see any reason to hold it against them that there was an accident,” Coun. Leah Noble said.

The day after the crash, RCMP told media a black Range Rover and a silver Lamborghini were travelling northbound where they were involved in an incident that caused the Lamborghini to lose control, strike the median, cross over into oncoming traffic, and hit a Toyota crossover travelling southbound.

Officers at the time said they were investigating both the driver of the Range Rover and the Lamborghini for dangerous operation of a motor vehicle.

“…Once all details are obtained, including the [Integrated Collision Analysis Reconstructionist Service] analysis, we will have a clearer picture of fault,” Sgt. Sascha Banks said in a release at the time.

While there was some chatter regarding rally organizers presenting to council and the VOP soliciting RCMP feedback before having its event permit approved, it would require a bylaw amendment.

Richman and Noble both expressed concerns about targeting the rally participants unfairly.

“There’s a lot of public that don’t like them, but we also have to be mindful of if that’s just a personal prejudice because some people just don’t like seeing really loud, obnoxiously loud, rich-looking vehicles everywhere, just like our road bikers get picked on, often very unfairly,” Noble said.

Gilmore noted that the permitting process is delegated to staff, so council would need to drill down as to what types of events need to be pulled out of that process.

Manager of corporate and legislative services Sheena Fraser said the change would mean that all special event permits would go to council, which would cause problems as there are usually more than a dozen issued annually and many applications aren’t received until the days leading up to the event.

“It would be a major change to our process,” she said.

Council ultimately resolved to invite organizers to present in support of the permit application if they so chose.

-with files from Alyssa Noel

Family in Labour Day weekend car crash near Whistler receives donated car
Oct 27, 2020 8:11 AM
Comments
We welcome your feedback and encourage you to share your thoughts. We ask that you be respectful of others and their points of view, refrain from personal attacks and stay on topic. To learn about our commenting policies and how we moderate, please read our Community Guidelines.