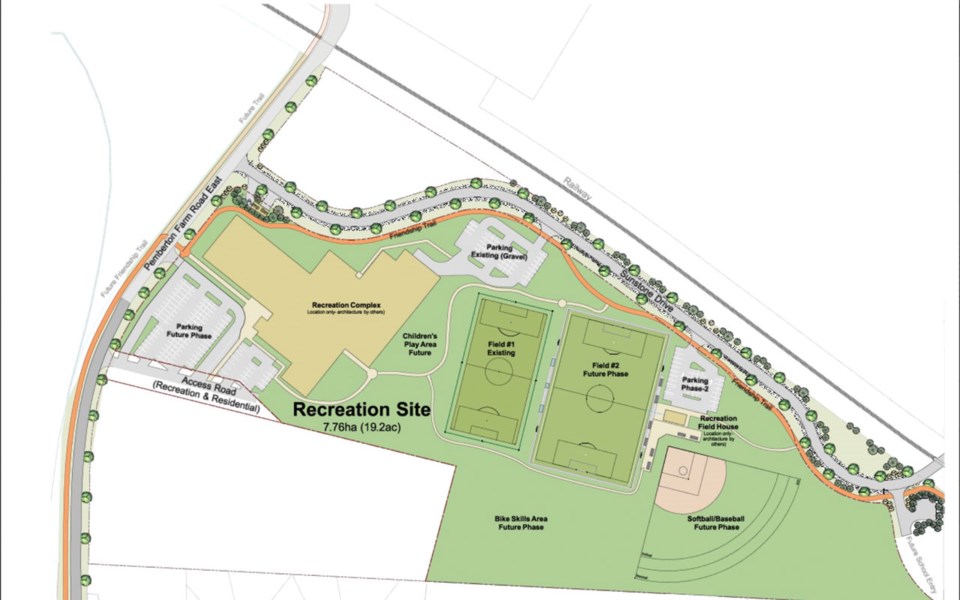 PARK PLAN A map of the proposed usage for the Pemberton Farm Road East recreation site, including a mountain bike skills park. Screenshot from Village of Pemberton council package

A long-dreamed-of mountain bike skills park took a step forward as Village of Pemberton (VOP) council voted at its regular meeting on Sept. 15 to pursue a grant that would cover the bulk of the cost.

Council voted unanimously to pursue a Community, Culture and Recreation Infrastructure Fund grant for the project, which would include a pump track, dirt jumps and skills features. In July, the VOP received just over $3 million from the same federal revenue stream for its second soccer field, amenity building and other improvements to the Pemberton Farm Road East recreation site, which would house the skills park as well.

The program funds up to 73.33 per cent of a project’s total cost, and with the price tag estimated at just over $619,000, the applicants are responsible for roughly $165,000. Once an already-secured $25,000 Whistler Blackcomb Foundation grant and nearly $27,000 from the Community Amenity Contribution (CAC) Funds are considered, that number drops to just over $113,000 for the Village’s backstop amount.

The initial budget also includes a contingency of more than $103,000, which chief administrative officer Nikki Gilmore explained is to account for a small possibility that the project may not secure inexpensive river gravel and would have to pay significantly more for gravel from a quarry.

As well, there are several other options in play to offset whatever amount remains, including potential additional CAC funding or cost-sharing with the Squamish-Lillooet Regional District. Later in the meeting, the VOP signed a memorandum of understanding (MOU) with the Pemberton Off-Road Cycling Association (PORCA) supporting that organization’s efforts to pursue fundraising options.

“I think this town would rally behind crowdfunding for a skills park like this,” she said.

There could also be potential cost savings in the form of completing some preliminary work at the same time as the new soccer field.

“Maybe there could be some synergies with the second soccer field,” suggested Gilmore, who added that installing electrical conduits for lighting is one potential option.

However, with applications due Oct. 1, there needed to be a commitment from council that the VOP was good for any cash that could not be acquired through other means. While the staff report suggested either short-term borrowing or dipping into boardwalk and road reserves, Councillor Ted Craddock was sour on the latter option, which council eventually nixed.

“I certainly support backstopping this, like we did with the track downtown,” he said, “but I’m not going to support taking money out of the boardwalk or the road reserves.”

Coun. Amica Antonelli questioned whether the project fit into the VOP’s overall plan, which includes a recreation planning process, including other projects that need funding.

“Typically, for projects like this, strategic planning would be more on policy, etc., and not necessarily on opportunities and projects that come up that may fit into grant applications,” Gilmore responded. “Grant applications definitely throw a spin into objectives and priorities, and it’s only to capitalize on the funds.”

In addition to approving the grant application, with short-term borrowing over three to five years if necessary and signing the MOU, council also directed staff to prepare a report for the Pemberton Valley Utility Service (PVUS) committee to incorporate the park into the recreation service, and submit a request that PVUS request the park cost-share the applicant’s portion of the funding.

The Squamish-Lillooet Regional District (SLRD) is hoping its latest attempt to acquire provincial tenure for the Ském’em Riverside Wetlands Community Park is successful.

The campaign to secure the 91 acres of land just north of Pemberton Secondary School could use a boost, and public comments on the application are being accepted until Sept. 25. To submit a comment, head to https://comment.nrs.gov.bc.ca/applications?id=5f1f313f4c007e0021b10424#details.

In an email, an SLRD spokesperson explained that past holdups to do with access are now clear since the regional district has title on an adjacent property.

“As the SLRD now holds title to the adjacent property, we can look to creating access across the tracks from the north either using the existing crossing at Pemberton Farm Road East or creating a new one to the west of existing crossing (SLRD has not started that exercise, it would follow acquisition of tenure).”

As well, the SLRD is now working in partnership with Lil’wat Nation to maintain cultural sites on the land.