The Whistler Community Services Society is set to receive tens of thousands of dollars in federal funding to help improve food security for local residents.

The emergency funding is part of $299,337 from the Government of Canada that will go toward helping local organizations across the Sunshine Coast and Sea to Sky Corridor working to help residents who are facing social, economic and health impacts compounded by the COVID-19 pandemic.

Patrick Weiler, member of parliament for West Vancouver-Sunshine Coast-Sea to Sky Country, announced the funding on Tuesday during a virtual meeting.

“COVID-19 has significantly increased food insecurity of the most vulnerable members of our community and has placed increased demands on the operation of organizations working to address this critical issue right across the country," Weiler said in a release.

The nearly $300,000 set to be split up among the riding is part of the $100 million Emergency Fund for food security that was announced by Prime Minister Justin Trudeau back in April. The fund was created in an effort "to position food banks and local food organizations early in the pandemic to respond to increased community needs," according to the release.

The total amount is being distributed between the Breakfast Club of Canada, Community Food Centres Canada, Food Banks Canada, Governing Council of the Salvation Army in Canada, and Second Harvest Food Support Committee. Those five organizations will in turn be tasked with passing the funds along to 16 recipients throughout the local riding. 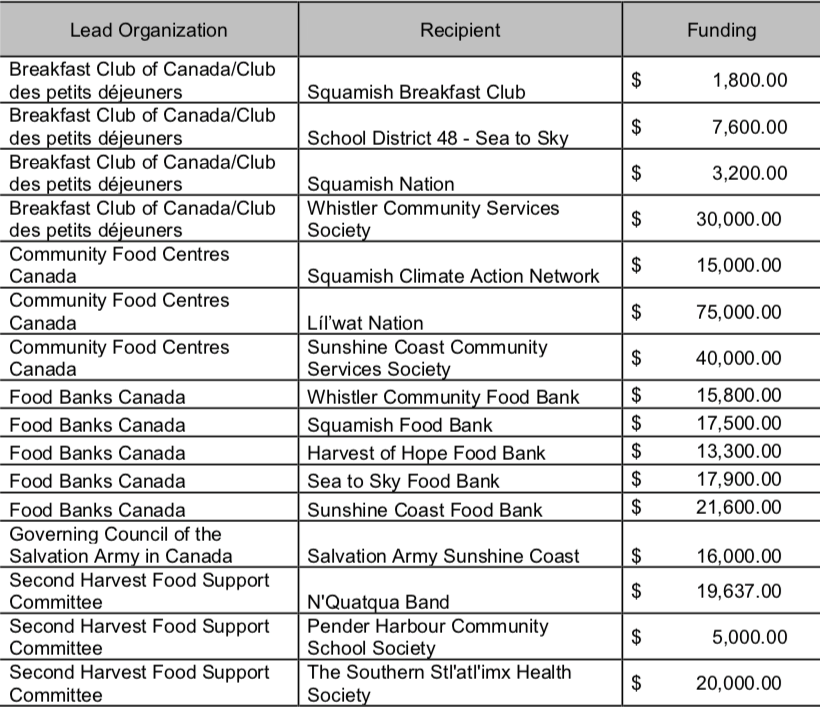 Image courtesy of the Government of Canada

The government says more than 1,800 food banks and local food organizations across Canada have been helped by the $100-million Emergency Fund, and estimates that money has translated into 6 million meals for more than 2 million Canadians.

According to Statistics Canada, one in seven Canadians live in a household that experienced food insecurity over a one-month period during the COVID-19 pandemic.

Check out the virtual announcement below to hear more about the local initiatives that will be making use of this funding.

The Whistler Food Bank is being temporarily relocated to the conference centre
Apr 3, 2020 10:50 AM

Whistler Blackcomb has donated hundreds of pounds of food to Whistler, Squamish and Pemberton food banks
Mar 27, 2020 8:20 AM
Comments
We welcome your feedback and encourage you to share your thoughts. We ask that you be respectful of others and their points of view, refrain from personal attacks and stay on topic. To learn about our commenting policies and how we moderate, please read our Community Guidelines.