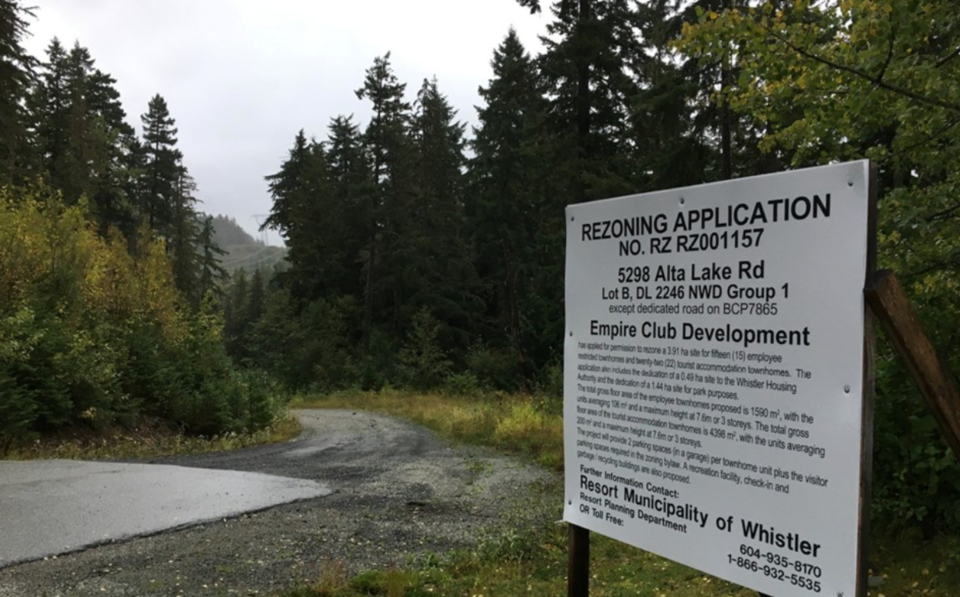 A rezoning application for a property on the west side of Nita Lake raised the ire of nearby neighbours last year. Photo by Braden Dupuis in September 2019

A proposed Official Community Plan (OCP) amendment related to a housing project at 5298 Alta Lake Rd. will be the first to test a new consultation process with local First Nations after receiving the go-ahead from Whistler council.

The OCP amendment bylaw—which council authorized staff to begin preparing on Sept. 15—seeks to add references to market residential and parkland uses while deleting references to potential commercial uses for the proposed development.

“With subsequent changes to the proposal through negotiation, it has since been identified that the Land Use Map Schedule ‘A’ designates the lands as visitor accommodation and therefore now needs updating to reflect the market residential and park uses as per the current RZ1157 proposal,” according to planner Roman Licko.

Under Whistler’s recently adopted OCP and corresponding Framework Agreement, the local Squamish and Lil’wat nations must be informed in writing of the proposed amendment.

Though Licko said the amendment isn’t likely to affect the interests of the Nations, if either doesn’t agree with that assessment they could initiate a more robust consultation process.

The proposal has raised more than a few questions for nearby residents. A dual public hearing will be held for both the OCP amendment bylaw and the related rezoning bylaw at a future date.

Council also approved a development permit for a new Canada Post sorting and distribution facility at 8060 Nesters Rd. in Nesters Crossing on Sept. 15.

The proposed one-storey building will “improve the existing level of service to the Whistler community and Sea to Sky corridor,” according to a report to council, but it won’t contain a retail component.

“I’m encouraged by this. This will do a world of difference for the Marketplace, and being able to move all of those trucks and everything out of a commercial and pedestrian area,” said Coun. Jen Ford.

“I think this is a real positive for our community, so thank you to the applicants.”

As always, De Jong looked at the proposal through an environmental lens.

“It is estimated that the number of truck or trailer trips are reduced by 50 per cent [by building this new facility]” he said, referencing the applicant’s design rationale submitted with the proposal.

“I don’t understand all the dynamics behind that, but that’s quite a positive step.”

Alta Lake Road housing proposal not in best interests of community
Nov 27, 2019 7:55 AM

Whistler council voices support for Alta Lake Road project
Jun 27, 2020 8:00 AM
Comments
We welcome your feedback and encourage you to share your thoughts. We ask that you be respectful of others and their points of view, refrain from personal attacks and stay on topic. To learn about our commenting policies and how we moderate, please read our Community Guidelines.