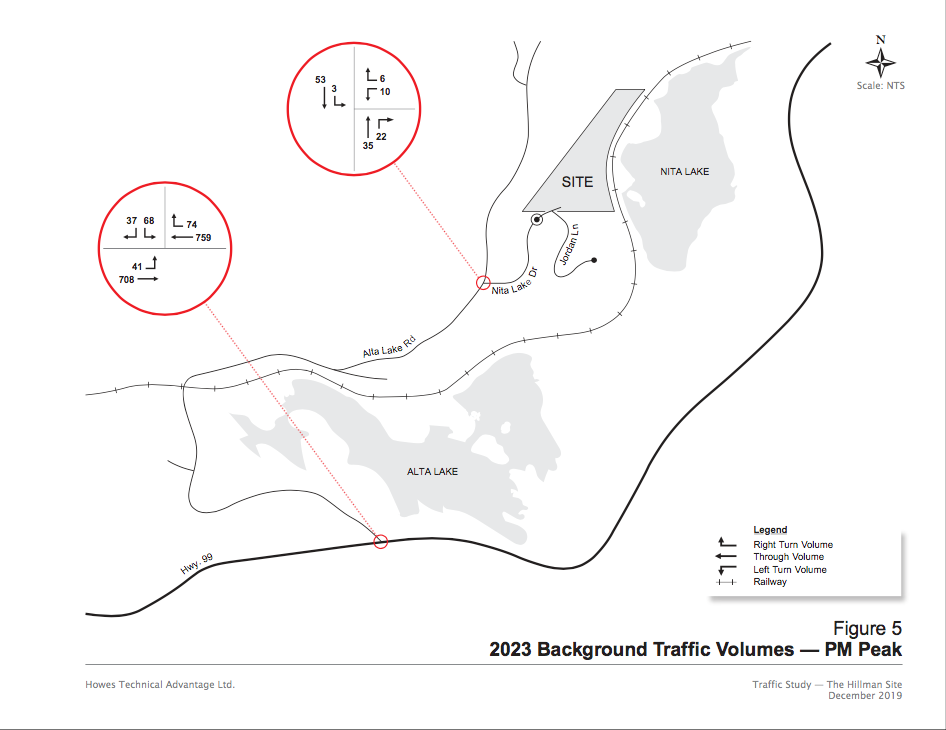 A screenshot of a traffic study showing projected peak p.m. hour volumes for the year 2023 near the site of a proposed housing development on Alta Lake Road. Screenshot

Although some elected  officials have yet to see them, some residents around Nita Lake have finally gotten their hands on environmental and traffic reports for the proposed site of a nearby housing development, raising more questions about the project ahead of its upcoming public hearing.

After months of back-and-forth, Nita Lake Estates strata president Cheryl Green said she obtained copies of a 2018 environmental assessment and a 2019 traffic study prepared for the Michael Hutchison-led Empire Club Development Corp., the proponent of a mixed-use market and employee-restricted housing development proposed for 5298 Alta Lake Rd., both of which were recently provided to Pique by the RMOW.

The report’s authors, PGL Environmental Consultants, said the site could support a number of at-risk plant and animal species, but further “species-specific studies would be required” to determine their presence.

Stressing that this isn’t her area of expertise, Councillor Cathy Jewett, who had only seen the reports after being sent them by Pique, said she wants to ensure there are no at-risk species on the site prior to greenlighting the project, which proposes 11 market tourist-accommodation units, 11 market residential units and 21 employee-restricted units, but that the zoning amendment being considered has more environmental protection baked in than the site’s current zoning.

“If the original zoning was to be used, a lot more of the site would be disturbed,” she said, adding that proposal calls for a 20-metre setback from the south property line, compared to its original 7.6 m, as well as the developer’s commitment to building a park on the site.

“If the zoning isn’t passed, it goes back to the original zoning, and instead you have [the allowable use of] a hotel with cabins scattered throughout the site rather than preserving areas for forest and public use, park use, and also that buffer gets lost as well.”

In a recent letter to mayor and council, Association of Whistler Area Residents for the Environment president Claire Ruddy urged the municipality to consider rezoning the site in the broader context of Whistler’s lake habitats, even calling for a dedicated “Lakefront Strategy” to be developed that would analyze similar areas that have already been developed, and review permitted uses and land management practices that could impact the areas.

“Do we want to safeguard spaces for nature? Have we done the research to ensure these are in the highest value locations for wildlife (now and as our watershed changes with climate change)?” she wrote. “What controls can be put in place to proactively or retroactively manage lakeshore impacts from planned and unplanned (including unpermitted) use, which can become compounded when dealing with higher densities of people?”

The consultants stressed the project would make up a miniscule volume of the traffic in the area, accounting for less than one per cent of the projected p.m. peak hour volume at the Alta Lake Road/Highway 99 intersection, for instance. The report did call for improvements to that intersection to mitigate some of the southbound traffic delays, including the installation of a semi-actuated signal.

The report does not address the overflow parking from the nearby Residences at Nita Lake*, a major concern for residents who have been vocal against the project in its current form.

“You’ve got tourists coming in that don’t know where the heck they’re going. They’re not watching, they don’t know there are kids on the road, even in the summertime. So we are asking those questions to get those answers,” said Green.

Another concern for Green and others—including, according to internal emails viewed by Pique, one of the RMOW’s senior planners—was that the traffic study was carried out on Oct. 9, 2019, a Wednesday in shoulder season, when traffic volumes would presumably be much lower than other times of year.

In a March 5, 2020 email from senior development planner Roman Licko to Caroline Lamont, land development manager for Hutchison’s Bethel Lands Corp., Licko said “staff have similar concerns to those expressed by members of the public regarding the timing of the study during the shoulder season.”

Lamont wrote “it would have been helpful to know this when our consultant was asking for terms of reference … in the fall,” adding that the company was “not prepared to redo the count,” which came at “a considerable expense.”

Jewett said the project is far from a done deal, with plenty of time for additional input from the community.

“Until that final vote is taken, we’ll be taking in all the information, we’ll be listening to the people, we’ll be reading their letters, and we will be reading any reports that we receive,” she said.

*An earlier version of this article incorrectly noted the development next to the proposed housing project as Nita Lake Estates, not the Residences at Nita Lake.