"All you need to make a movie is a girl and a gun." That famous, factually correct quote is attributed to French director Jean-Luc Godard ( Bande à part , Breathless ), but Godard himself attributes it to American movie pioneer D.W.
May 30, 2020 7:00 AM By: Feet Banks 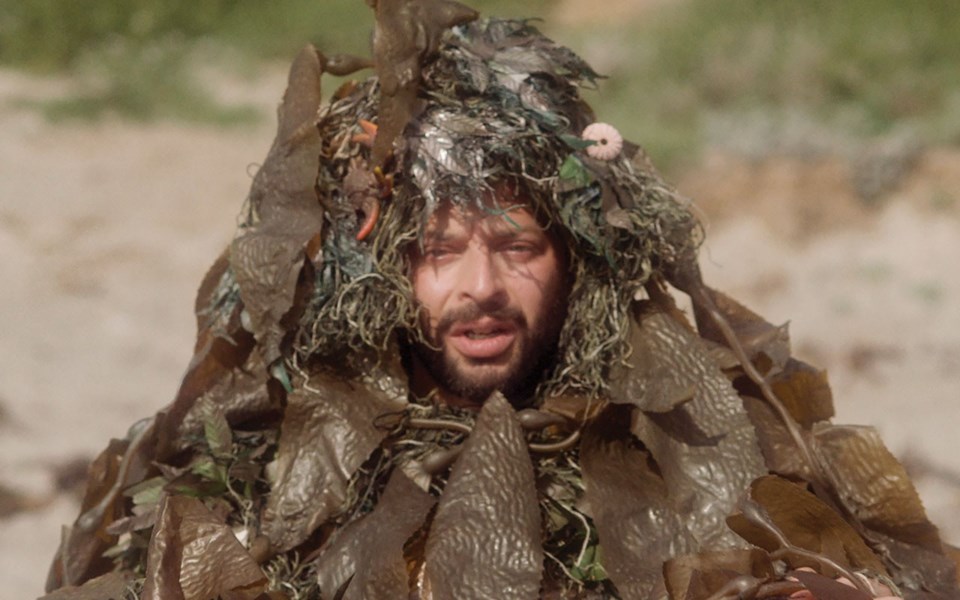 Nick Kroll is featured in the new star-studded documentary Have a Good Trip: Adventures in Psychedelics. Photo courtesy of Netflix

"All you need to make a movie is a girl and a gun."

That famous, factually correct quote is attributed to French director Jean-Luc Godard (Bande à part, Breathless), but Godard himself attributes it to American movie pioneer D.W. Griffith (who pioneered the feature-length film, but is also best known for 1915's The Birth of a Nation, which hasn't aged well).

Watch Broken Blossoms instead. It stars Lillian Gish, who actually got the Spanish Flu while filming that picture in 1918, but she beat the virus and went on to a 75-year cinematic career and the title of First Lady of American Cinema. Lillian Gish, represent!

So yeah, a girl and a gun... but these days a shitload of drugs doesn't hurt either. Whether it's cartel violence or a big deal gone awry (or usually both), guns and drugs have been keeping cinema afloat for decades (especially in the pre-superhero years).

Hollywood loves the hard drugs, though—crack kingpins, coke smugglers, the depravity of heroin junkies—but not many studios are backing flicks about psychedelics, probably because smuggling acid anywhere isn't dramatic and it's really hard to film an interesting movie about four people laughing and rolling around by an alpine lake.

And any time a movie did try to pull off a scene where someone gets ripped on psychedelic drugs, it was almost always portrayed in a cheese-dick, not-at-all-how-it-is kinda way. (The exception that proves the rule is Fear and Loathing in Las Vegas, which nails a scene featuring acid and a hotel carpet.)

But the times they are a changin'. Civilized society (which is still super rare, sadly) is beginning to realize that mushrooms are awesome, un-stepped-on ecstasy (no one calls it that anymore) can save marriages, and acid might actually play a huge role in helping addicts quit doing drugs altogether (or get three days worth of farm chores out of the way in one day).

Psychedelics are happening, man, and Netflix is hoping to kick off the revolution with Have a Good Trip: Adventures in Psychedelics, a documentary featuring a host of celebrities talking about that time they got super f*cked up.

A mix of trippy animation, comedic re-enactments of anti-drug propaganda, and talking head celebrity interviews with the likes of Sarah Silverman, Nick Kroll, Sting, Deepak Chopra, and writer/ director Donick Cary, the film also attempts to argue that psychedelics are safer than the "hard" drugs and can be fun and beneficial to creative types. Which is true, but also a bit of an oversimplification—lots of people don't just do one kind of drug or the other, and the best interviews in Have a Good Trip— Anthony Bourdain and Carrie Fisher—are both dead, Bourdain by apparent suicide and Fisher somewhat mysteriously after a history of mental health issues. (Other dead celebrities mentioned include Hunter Thompson, Jerry Garcia, and John Belushi.)

Have a Good Trip is cute, and both the anecdotes and visuals feel much more real than the Hollywood norm, but even at 85 minutes it's apparent, like any actual psychedelic trip, you kinda had to be there...

Beyond that, Quarantino continues and for his eighth feature, 2015's The Hateful Eight, Quentin kicks it old school: skipping the drugs and going straight for a girl and a gun story, but with a lot more guns.

Jennifer Jason Leigh (Rush, Fast Times at Ridgemont High) stars as Daisy Domergue, a murderous criminal apprehended and in the company of two bounty hunters (Sam Jackson and Kurt Russell) and a would-be sheriff (Walton Goggins) when a blizzard forces their stagecoach to take shelter at Minnie's Haberdashery, a high mountain refuge house with a host of mysterious characters inside, and not a damn one of them is Minnie.

Shot as a 70mm ultra widescreen western, but set almost entirely inside the single-roomed haberdashery, Tarantino said this one is about "a bunch of nefarious guys trapped in a room, all telling backstories that may or may not be true."

The Hateful Eight also runs over three hours and is admittedly a little slow to get going (even with some early unsettling violence). But if you give it a chance, the tension sure mounts. This one dips back to Tarantino's roots a bit, with exploding heads, racism on display, and a simultaneous shoot-out.

Set in 1877, the ghosts of the American Civil War still wisp through each character, allowing Tarantino to continue his conversation about America's "horrible past with slavery" and racism.

Where Django Unchained was a revenge-fantasy set right in the thick of things, this film offers a glimpse of hope that hatred can be, if not overcome, then at least mutually shared into submission. And while many critics cried foul about the shitkicking that Leigh's character takes at the hands of her captors, others—including Tarantino himself—assert that it's a showpiece of equality.

Quarantino 7—Hot cars and cool chicks
May 9, 2020 7:00 AM
Comments
We welcome your feedback and encourage you to share your thoughts. We ask that you be respectful of others and their points of view, refrain from personal attacks and stay on topic. To learn about our commenting policies and how we moderate, please read our Community Guidelines.