Local artist launches INSPO-Art series to give back

Inspired by compelling locals, Jenna Jones’ initiative gives 100 per cent OF profits from print sales to worthy causes
Apr 16, 2021 10:00 AM By: Alyssa Noel 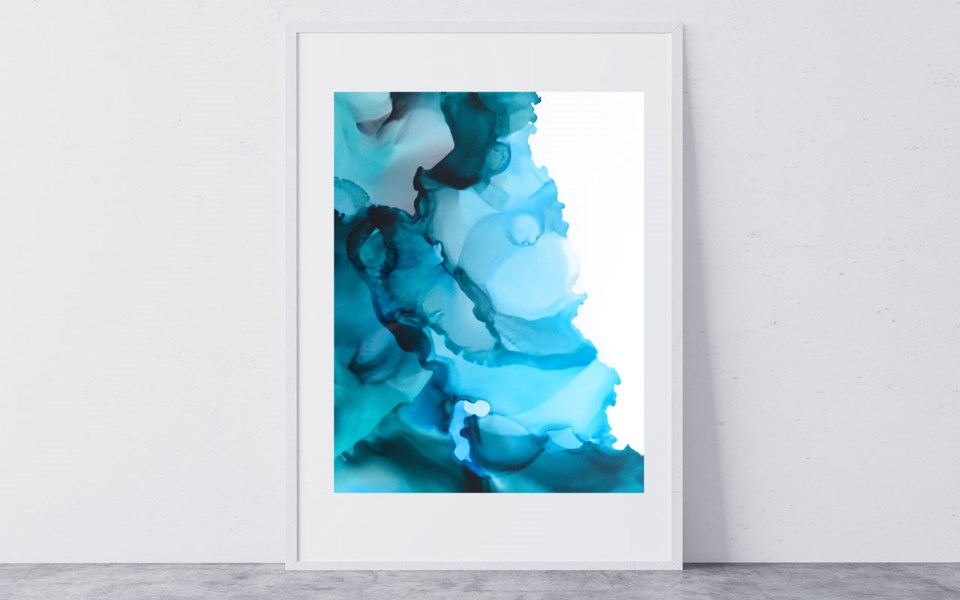 As Whistler artist Jenna Jones points out, if you put a little thought into it, you could probably assign each of your loved ones a pretty accurate colour.

At least, that’s how she starts the process of painting the subjects of her INSPO-Art series. So far, the series has yielded three abstract pieces inspired by three different locals with 100 per cent of the proceeds from print sales going towards a charity they care about—or in one case, to support a local through a hard time.

“That’s the first step; finding their palate,” Jones says. “And then usually the flow is very organic—how the actual composition is created. I’ll find a colour based on what their personality is and how you feel with them.”

To that end, Julia Murray, an Olympian, creator of Jules Fuel, and holistic nutritionist, was a mix of deep and light blues, with touches of turquoise (with ocean conservation as her cause of choice); Joan Novak, a longtime local hair stylist and colourist, is “pink and ethereal” (with funding going towards her battle with cancer); while Olivia Rey, the most recent inspiration for the series, has “a lot of loyalty… She’s a confident, committed person,” translating to blues.

Rey, who injured her C6/7 vertebrae in a car accident in 2015, is beginning a masters in counselling program and serves as a Wings for Life ambassador—which supports spinal cord research—her charity of choice for the project.

“I know all these people personally, but they’re all people that have inspired me and touched me in very different ways,” Jones says. “I started out with this because I really wanted to find ways to give back. We all know it not only helps others, but it’s also the most rewarding feeling. My art is my way I can give back.”

Jones’ road to becoming an artist was a windy one. She grew up in Ontario and went to school in Ottawa to become a medical acupuncturist and a registered massage therapist.

Out East, she wound up working for Cirque du Soleil during their Michael Jackson tribute tour across Canada. “They asked me to do a three-year international tour,” Jones says. “It was too many arenas. So, instead of that, I moved to Whistler.”

(A more recent big-name massage therapist gig: She worked with the Canucks before COVID-19 first disrupted the hockey season.)

In a classic case of a failed come-for-one-season, she wound up delving into Whistler’s many sports and sticking around. On her myriad outdoor adventures, she always has a camera in tow and eventually decided to explore her photography passion by moving to Vancouver to attend school.

“[Afterwards] I had a business partner and we started building up clients in Whistler and did really beautiful, candid family photography,” she says.

But when one of his family members got sick back in Brazil, he headed back to help for six months, prompting her to promise to put their business on hold.

“I was like, ‘I need to be creative; I’m going to start painting while you’re gone,’” she recalls.

She wound up falling even harder for painting than photography. “I thought, ‘This is crazy. I spent all this time and money on school and I don’t want to work. I want to paint,’” she says.

Jones temporarily moved to Vancouver where she had a studio and wound up having her work featured in three shows over six months—and nearly selling out all of them. It was during one of those shows she met her now-fiancé—who just happened to live in Whistler— and wound up moving back.

Now, she says, her painting career is largely word-of-mouth commissions and working with home stagers and interior designers on homes that are for sale.

“I try to promote myself in different ways locally,” she says, citing participating in silent auctions. “I like to work for a cause or a purpose.”

The various INSPO-Art series prints are for sale now at jennajonesart.com.