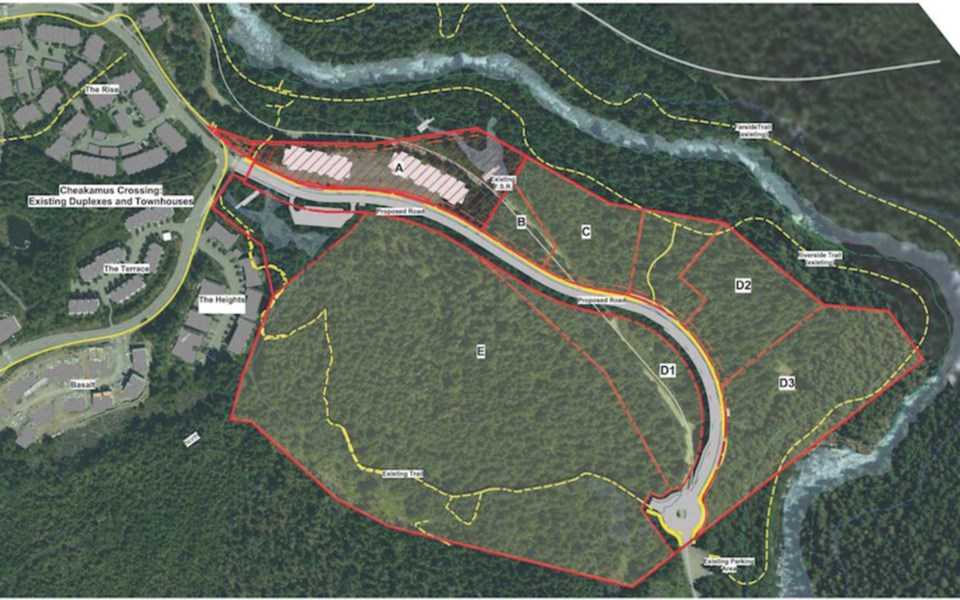 NEXT STEPS Whistler council gave third reading to a rezoning for potential employee housing in Cheakamus Crossing on Feb. 16. Image courtesy of the Resort Municipality of Whistler

A rezoning bylaw to allow development of more affordable housing in Whistler’s Cheakamus Crossing neighbourhood is headed for adoption after council gave it third reading on Feb. 16.

Once fully realized, the second phase of development on Whistler’s 2010 Olympic Legacy Lands could yield about 295 units of new housing.

Third reading came after a Resort Municipality of Whistler (RMOW) staff presentation detailing comments heard at a Jan. 26 public hearing, mostly related to the impacts of increased density and traffic, ongoing access to regional attractions (like the Cheakamus River and Loggers Lake), affordability and tenure of the new housing, sustainability, and impacts on the surrounding environment and trails.

“The proposal is consistent with growth management policies in the Official Community Plan,” said planner John Chapman, in a presentation to council.

“One note that staff would like to make is that the additional population density in the Phase 2 neighbourhood may make neighbourhood-serving commercial amenities more viable in Cheakamus Crossing.”

Road design and construction in Cheakamus did contemplate the traffic volumes associated with Phase 2, and the proposed extension of Mount Fee Road incorporates active and public transportation, Chapman added.

“An environmental protection covenant will also be a condition of the rezoning, and as well, each phase of the development will be subject to protection of riparian and sensitive ecosystem development permit approvals.”

The final mix of rental versus sale housing is yet to be determined, but the proposed zoning allows for flexibility, Chapman said.

“Certainly the development would offer a range of housing types from single-family, duplex, townhouse, to condominium or rental apartment,” he said.

In terms of recreation, access to the House Rock parking area will not change, Chapman noted, but the Westside FSR past Parcel A will be discontinued, with new access to Loggers Lake and beyond being provided via the new Mount Fee Road extension.

With the relocation of the Westside FSR, officials at the Cheakamus Community Forest are planning a new road behind the neighbourhood and through the Basalt Valley Spur—a concern raised more than once at council by Councillor Cathy Jewett (see related story on page 22).

“There is a concern that it bisects habitat and forest,” Jewett said. “Has there been any feedback from the public on that?”

The area in question is within the Cheakamus Community Forest, and has experienced harvesting in the past (with more planned for the future), Kirkegaard said.

“No environmental impact assessment is required under the Forestry Act,” he said. “Given that the area has already experienced significant forestry development in the past, the additional road construction is not expected to have significant impact on the environment.”

While rec users will still have vehicular access to Loggers Lake, Cheakamus River and the trail system by way of the Mount Fee Road extension, Jewett pointed out that the road relocation appears to sever access to a section of the Upper Ridge trail above Loggers Lake.

“My understanding is, looking at this, it will be a marooned trail, unless you want to walk up it,” she said.

“It’s certainly not rideable up.”

Another staff report will come to council prior to adoption.

As for when shovels will be in the ground on Phase 2, there’s no set construction timeline, an RMOW spokesperson said, but “early works are underway.”