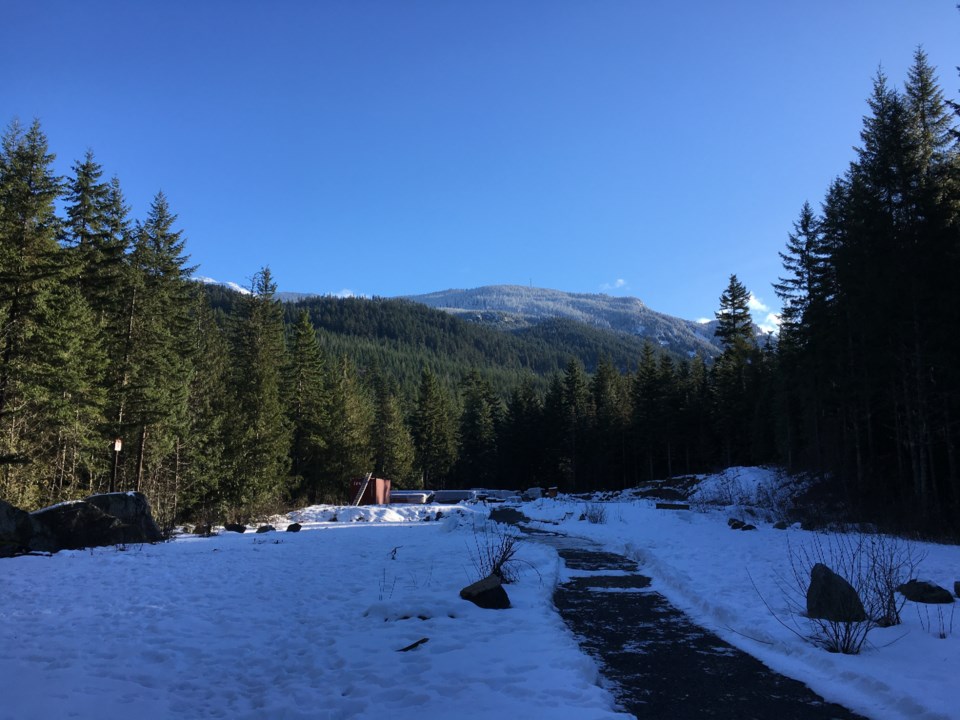 The Resort Municipality of Whistler has big plans for its remaining land in Cheakamus Crossing, with potential for close to 300 units of employee housing to be developed in the coming years. Photo by Braden Dupuis

After weighing the financial risks and approving a $10-million line of credit for the Whistler 2020 Development Corp. to start developing the land on Dec. 1, council officially gave first readings to a related rezoning bylaw on Dec. 15.

A public hearing will follow in the new year.

Once adopted, the bylaw will allocate existing permitted housing uses and development density under the current UR1 zoning to individual parcel areas for future development.

While a pair of apartment buildings containing 100 housing units are first to be built (on what’s known as Parcel A, south of the existing Cheakamus neighbourhood), the rezoning clears a path for other future development as well, said director of planning Mike Kirkegaard, in a presentation to council.

For comparison, the existing Cheakamus neighbourhood contains 573 units of housing.

“Overall, the development parcels provide for a diversity of housing forms with a mix of apartments, townhouses, and duplex and detached dwellings, with opportunities for both ownership and rental housing,” Kirkegaard said. “A variety of unit sizes, and number of bedrooms, for a diversity of household sizes and living arrangements is also accommodated.”

All told, 92 per cent of all new units created will be committed to employee-restricted rental and ownership, with just 18 lots on Parcel D3 going to market, Kirkegaard said.

The WDC expects it can use sales of the market lots to repay the $10-million line of credit, along with some of its other outstanding debt to the RMOW (see Pique, Nov. 19: “Demand for Whistler housing strong heading into winter.”)

The Dec. 15 council resolution comes with a number of conditions that must be met prior to adoption, including dedication of park and open space, trail improvements, bus shelters and an extension of Mount Fee Road.

All future developments will be subject to development permit requirements, as well as guidelines for protection of riparian and sensitive ecosystems, Kirkegaard added.

The project will necessitate the rerouting of the westside Cheakamus Lake Forest Service Road, noted Councillor Cathy Jewett, who wondered if an environmental impact study may be in order.

“If that FSR is rerouted through the Basalt Valley Spur and into the quarry area, and Jane Lakes, we’re reopening a habitat and terrain that has been great for wildlife and also for Whistler life,” Jewett said. “So I do have an issue with that.”

Tipping fees at the Whistler Transfer Station are set to increase in 2021.

Increasing the fees incentivizes waste reduction, and keeps the municipality in line with the landfill in Squamish, said manager of transportation and waste management Andrew Tucker in a presentation to council.

“Tipping fees are used as an incentive, particularly if you have a differential tip fee so that landfill waste, or hard-to-recycle materials or materials that aren’t recycled whatsoever, those tip fees remain high, and then the recyclable products, they have tip fees that are low,” Tucker said.

“So it creates an incentive for people to think about, ‘OK, well if I start planning and start separating my waste out, maybe there’s some opportunities here where I’m not needing to pay the same amount of money.’”

A rezoning bylaw to allow the popular Alpine Café in Alpine Meadows more restaurant space was adopted by council on Dec. 15.

The amendment will alter the site’s density requirements to increase space for the restaurant/café while reducing space for convenience retail.

The new bylaw requires 25 square metres of gross floor area be kept for retail to ensure residents of Alpine Meadows don’t have to travel outside their neighbourhood for essentials.

“The existing building on the site was originally built in 1986, and contained retail use on the main floor and a two-bedroom suite on the second floor,” said planner Clancy Sloan in a presentation to council on Oct. 20, adding that the site (located at 8104 McKeevers Place) was renovated in 2002 to add the café and market.

A public hearing for the rezoning held on Nov. 17 drew no public comments.

“This is exciting,” said Mayor Jack Crompton. “It’s been something that’s been talked about for a long time, so congratulations.”