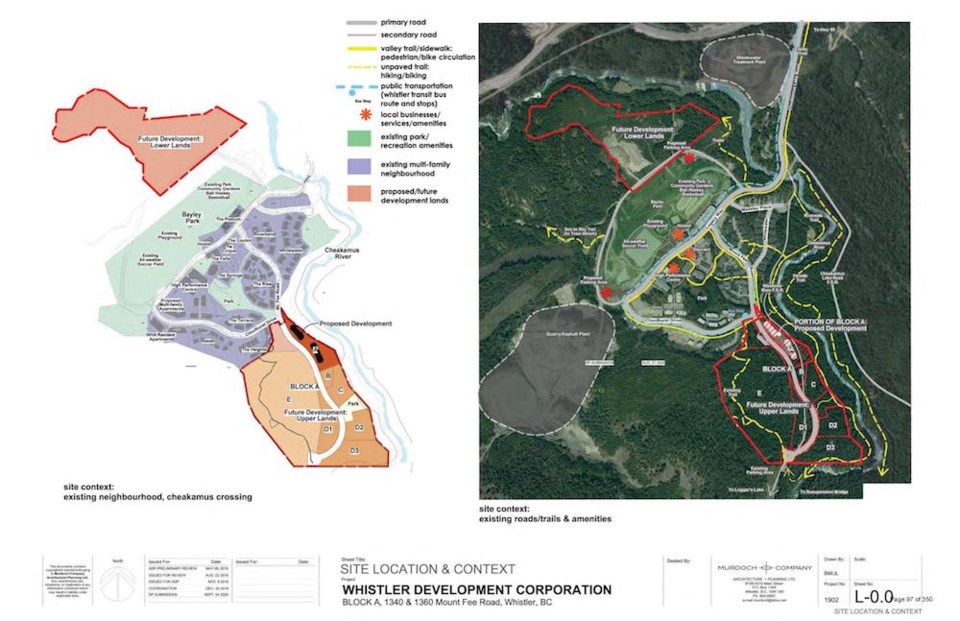 Image courtesy of the Resort Municipality of Whistler

The Resort Municipality of Whistler (RMOW) is preparing to move ahead with new housing in Cheakamus Crossing.

At its Sept. 15 meeting, Whistler council will consider a development permit for “Parcel A” in Cheakamus, located at 1340/1360 Mount Fee Road.

The permit would allow for construction of two, four-storey employee housing apartment buildings (100 units and 138 parking spaces), as well as the extension of Mount Fee Road and other related infrastructure.

Planning and design for the site—located at the southeast end of the existing Cheakamus neighbourhood next to the Cheakamus River—has been underway since late 2018.

Council will also consider endorsing further review and processing of a rezoning application that would pave the way for further development of the lands on Sept. 15.

“The proposed rezoning seeks to amend the Urban Reserve 1 Zone to reduce the minimum parcel area to enable future subdivision of the lands and to allocate the existing permitted density and uses in the zone to corresponding parcel areas,” reads a staff report to council.

“The proposed rezoning would also establish the building setbacks for each parcel area within the zone, as well as add daycare as a permitted use.”

A “public information and input opportunity” will be held prior to first readings of any rezoning bylaws.

The lands in question are a portion of the Lower Cheakamus Community Land Bank Site, which was granted to the RMOW for affordable housing as part of the 2010 Winter Olympic and Paralympic Games legacy agreement.

A different housing proposal is also back on the agenda for Sept. 15, as council will also consider authorizing staff to prepare an Official Community Plan amendment for a rezoning at 5298 Alta Lake Road to add references to market residential and parkland uses and delete references to potential commercial uses.

“With subsequent changes to the proposal through negotiation, it has since been identified that the Land Use Map Schedule ‘A’ designates the lands as visitor accommodation and therefore now needs updating to reflect the market residential and park uses as per the current RZ1157 proposal,” reads a staff report to council.

The proposal has already raised more than a few questions for nearby residents.

Find the full agenda along with a link to tune in live, on the municipality's website, and pick up a copy of Thursday’s Pique for more from council.