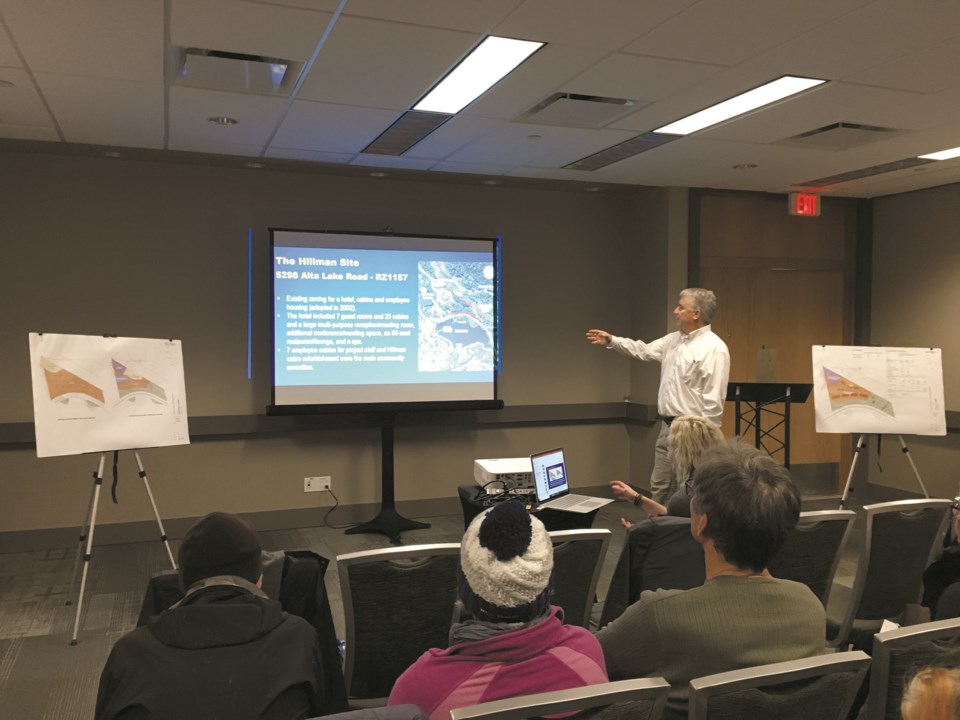 Developer Michael Hutchison speaks at a public information meeting for the project at 5298 Alta Lake Road at the Whistler Conference Centre in 2019. File photo

A rezoning for a controversial employee-housing project is headed for adoption—with some minor amendments—after council gave related bylaws third reading on June 15.

The project at 5298 Alta Lake Road located on the shores of Nita Lake has generated a massive response from the community since first being introduced in September 2019, including a virtual public hearing in March of this year attended by more than 80 people.

At council’s June 15 meeting, Resort Municipality of Whistler (RMOW) staff walked through the comments heard at the public hearing before recommending some minor changes to the proposal.

The changes include a five-per-cent reduction in the gross floor area of the market units; improved pedestrian connectivity by extending the sidewalk on Nita Lake Drive through to the new park located on the property; and a permanent split rail fence to separate the nature conservation parcel from the development parcel.

Though RMOW staff first requested that the developer explore the possibility of removing a market unit altogether to reduce density, “the applicant considers that it’s not financially viable to remove a unit without removing multiple employee units,” said planner Roman Licko in a presentation to council.

Staff reviewed a second traffic study completed by the proponent, and supported its conclusions, Licko added.

“Traffic generated by this proposal is well below the traffic operation capacity of both Nita Lake Drive and Alta Lake Road,” Licko said. “The development-generated trips are minimal in comparison to the total traffic volume on Highway 99, and further mitigation improvements are not required on the existing road network over and above improvements already included in this development.”

The proposal has evolved significantly since it was first presented in 2019, “and the current rezoning proposal before you delivers significant amenities to the community, the primary amenity of which is employee housing,” added planner Melissa Laidlaw, noting that a related Official Community Plan (OCP) amendment bylaw, which council also gave third reading on June 15, “is really a minor, more technical amendment, which will result in more protected park and natural conservation lands than what is currently designated on the current land use map of the OCP.”

Further, the rezoning bylaw is consistent with both the OCP and Private Sector Employee Housing Guidelines, Laidlaw added.

“With consideration of all the concerns expressed in the public hearing process and the changes that are currently presented to the bylaw this evening, staff consider that the project … is in the community’s best interest,” she said.

“This location is walkable to lakes, skiing and buses, it has stunning views, it has great access to Nita Lake Lodge, Roland’s and Creekside,” said Mayor Jack Crompton.

“This is one of the, I think, very best sites in Whistler, as is clear based on the property values and the market homes built near it. I am convinced housing for locals should be in the very best locations in Whistler—this proposal does that, and so I will be voting in favour of it.”