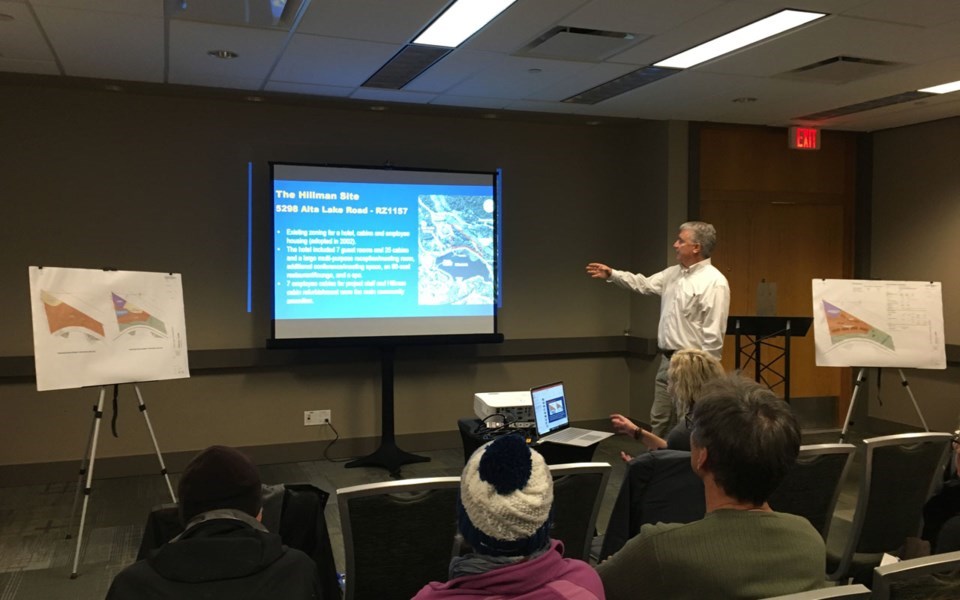 Developer Michael Hutchison presents on a housing proposal for 5298 Alta Lake Road at an open house in October 2019. A public hearing for the project is set for Feb. 23. File photo by Braden Dupuis

The project—which proposes 11 market tourist-accommodation units, 11 market residential units and 21 employee-restricted units on the lakefront site—was back on the Feb. 2 council agenda for minor amendments to the rezoning bylaw.

The first two readings of the bylaw (which council gave on June 23, 2020) were rescinded, and replaced with updated versions that include details about a planned park amenity and standards for a Valley Trail amenity.

A public hearing—likely to be a marathon, given the feedback from the public so far—is set for Tuesday, Feb. 23 on Zoom.

All correspondence received to date will be considered as part of the public hearing process.

The first traffic impact study conducted for the project—on Wednesday, Oct. 9, 2019—raised red flags for nearby residents, who argued the study wasn’t representative of peak periods.

Council has generally been supportive of the project since it was first introduced, with some councillors noting that the developer is already entitled to build a hotel and several cabins under the site’s current zoning.

“What would be the repercussions to the municipality if we decided to down-zone this?” Councillor Cathy Jewett asked at the Feb. 2 meeting. “There seems to be a thought that we could just change things like this, and it’s very difficult, of course, because there’s already zoning on this.”

The RMOW would have to initiate that rezoning itself, said senior planner Melissa Laidlaw.

“The parcel currently has significant development rights, so a rezoning such as that would have to go through a typical zoning amendment process,” she said. “And without review of the Official Community Plan, I cannot confirm at this time whether such a proposal would be consistent with the OCP land-use map.”

Earlier at the Feb. 2 meeting, local resident Dawn Titus raised questions about the project during the public Q and A, including proponent Michael Hutchison’s previous involvement with the Mayor’s Task Force on Resident Housing.

Guidelines for employee housing projects from private developers were one of seven recommendations unveiled by the task force in November 2017.

A rezoning application for the Alta Lake Road site was first submitted under the task force’s original guidelines in the spring of 2018, but was withdrawn before council could consider it.

According to a staff report from the Sept. 18 council meeting, the applicants “determined that one or more of the evaluation criteria did not fit with their development goals for the property.”

While council approved five other private-developer employee-housing projects for further review at that meeting, lawmakers would later grapple with three of the proposals, and on Feb. 26, 2019, council instructed staff to “broaden the scope” of the guidelines.

On March 26, 2019, council adopted new guidelines removing the requirement that all projects in question must be 100-per-cent employee housing, and permitting limited amounts of new, unrestricted market housing to support project viability.

Council got its first look at the proposal for 5298 (then 15 three-bedroom employee-housing-restricted townhomes and 22 three-bedroom market-tourist-accommodation townhomes) on Sept. 17, 2019—a meeting attended by more than a dozen concerned residents.

The revised application was presented to council in its current form in February 2020, and subsequently authorized for further review.

The Feb. 23 public hearing marks the last legislative step—and the last chance for public input—before consideration of third reading and then adoption.

The task force, which last met on Nov. 16, 2017, prior to the election of a new mayor and council in the fall of 2018, had an official code of conduct that stated that “all participants must not engage in any financial transactions, contracts, or private arrangements for personal profit, which accrue from or are based upon confidential or non-public information,” Titus pointed out at the Feb. 2 meeting.

All of the task force’s meetings were closed to the public, she added.

“How did somebody who had that much engagement with the task force and the development of these opportunities, now come before you looking for rezoning on a property where there’s going to be lots of money made?” she asked.

Mayor and council will be “very careful” that no one is using privileged information gained from volunteer roles with the RMOW, said Mayor Jack Crompton.

“We will be dealing with this on the merits of the rezoning,” he said. “We’ll be considering the input of the neighbours, and the details of the proposal, and so I think it’s fair to say this will get a fair hearing in front of this table.”

Reached by phone, Hutchison said he only attended two of the task force’s meetings, noting he was one of 19 people sitting around a table for an hour each time.

“It was public consultation,” he said. “We simply gave our opinions of different forms of housing. That’s it, that’s all. They wanted a developer on there to talk about infill housing and different types of housing.”

Hutchison added that 5298 is “hardly an undisturbed site,” and has held its current zoning (permitting a boutique hotel and associated cabins) since 2002. “Finding housing, even back when I got here in 1988, was astoundingly difficult, and it has been astoundingly difficult for the past 40 years,” he said. “If we don’t continue to work to bring [more housing online], then there are no young people coming here and having families and creating a community.”