Should Whistler do more on climate action? 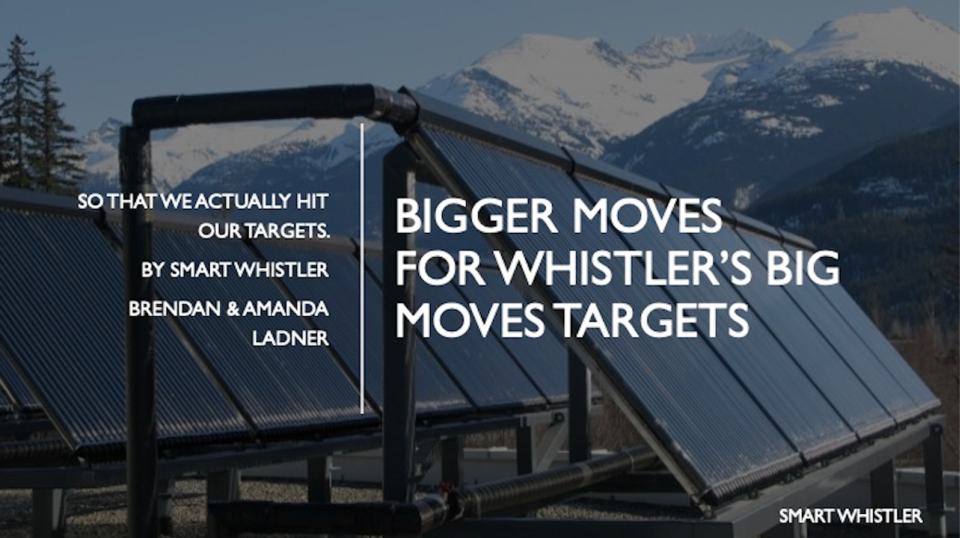 Brendan and Amanda Ladner will present their ‘Bigger Moves’ presentation on climate action to council on March 2. Screenshot

When Brendan Ladner moved his family to Whistler from Vancouver last fall, it was right when the Resort Municipality of Whistler (RMOW) was conducting a survey that would inform its new Big Moves Strategy on Climate Action.

Having experienced his own climate angst—and having seen many promises and emissions reduction targets with little corresponding action—he was excited to take part.

But something about it felt off.

“Doing the survey, I was convinced Whistler is missing the boat quite seriously on climate action,” said Ladner, CEO of Vancouver healthy fast food chain SMAK.

“The impression I got from the questions is that if everyone gets a Tesla, we’re going to be fine.”

With that, Brendan and his wife Amanda set out on a research project, which will culminate in a presentation (from an initiative the Ladners are calling Smart Whistler) to council on March 2.

The presentation will make the case for “Bigger Moves” to ensure Whistler actually hits its ambitious climate targets—namely by declaring a climate emergency, and subsequently delaying or deferring non-emergency spending.

Working from the 2021 to 2025 Five Year Financial Plan, the Ladners identified projects they believe could be delayed by up to three years, freeing up roughly $12 million a year for climate initiatives.

It also calls for a revenue-neutral road toll (with all income being spent on active transportation and zero-emission transit), a one-per-cent gas tax to deter driving, lower speed limits, revamped building requirements and a ban on new natural gas connections, among other initiatives.

“This is the decade of disruption, and it doesn’t seem like anyone at the municipality thinks this.”

Smart Whistler has already been pitching ideas to mayor and council, who look forward to hearing the March 2 presentation, said Mayor Jack Crompton.

“Our organization puts a tremendous amount of thought into the decisions we make around where we invest taxpayer dollars,” he said.

“We’re spending the community’s money, and it’s critical that we’re deeply thoughtful when we do that. Our five-year financial plan lays out what those expenditures are, and though we can adjust them in response to changing realities, they’re in that plan for a reason.”

As seen throughout the 2021 budget process, not properly investing in assets and infrastructure can have tax implications down the line.

But then, the 2022 budget comes in a municipal election year—what better time to gauge the will of the electorate by floating some overly ambitious spending proposals?

The question becomes, then, how much does political risk factor into council’s decision-making on climate?

“Honestly, I really think trying to do what’s best for our community is most important, regardless of what the politics of those decisions are,” Crompton said.

“We must be responsible with the community purse, and we want to be ambitious with how we respond [on climate]. It’s a fine balance.”

Find a link to watch the March 2 presentation at whistler.ca/municipal-gov/council/meeting-agendas-and-minutes.