Not without risk, credit will kickstart affordable housing builds
Apr 12, 2021 8:00 AM By: Braden Dupuis 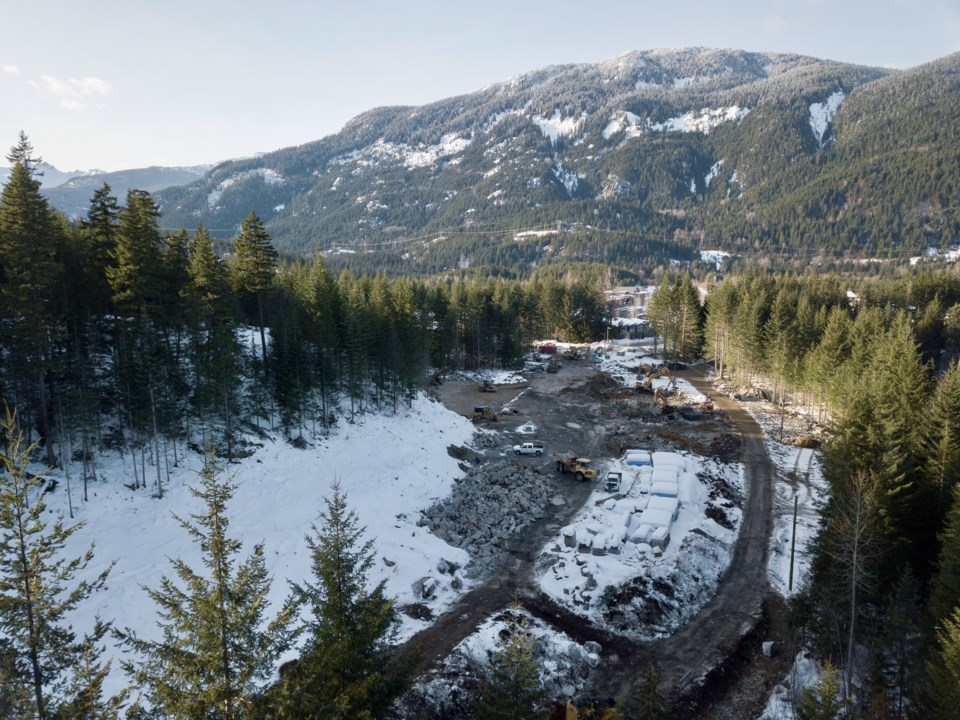 A $10-million line of credit will be used to advance affordable housing buildings on Parcel A in Cheakamus Crossing—but the investment isn’t without risk.Photo by Steve Andrews

The financial foundation of Whistler’s affordable housing future is beginning to take shape—but the risks and unknowns remain.

At its April 6 meeting, council authorized Resort Municipality of Whistler (RMOW) staff to execute partnering and credit-line agreements with its subsidiary the Whistler 2020 Development Corp (WDC) for a $10-million line of credit (as included in the 2021 municipal budget).

The money will be used to begin construction on two new apartment buildings—about 100 units in total, with one building for rent and one for purchase—on Cheakamus Crossing’s Parcel A.

According to the WDC’s project plan, development of the buildings (and 18 market for-sale lots) will cost about $43 million.

The realizable market value of the two new buildings is expected to be about $39 million—which is where the line of credit comes in.

In the past, the RMOW has used its employee housing reserves to fund the difference between the realizable market value of a project and its costs, said director of finance Carlee Price in an April 5 media briefing.

“We don’t currently have employee housing reserves, so the credit extension is meant to sort of fill that hole,” Price said, adding that additional third-party financing will also be required to carry the project through construction.

But the move is not without risk. In a report to council, Price noted that the size and value of the projects, and the spending involved, are sufficient to “meaningfully impair the municipality’s core financial position” if the agreement is not well executed.

“As with any project, we have in hand a project plan, and a whole series of estimates as to how the project will likely evolve—so when does the spending happen, what’s the magnitude of the spending, and then what are the revenues to be realized at the end?” Price said.

“All of those numbers are estimates. They’re well-informed estimates, but any and all of them could change.”

Further, the agreement is quite different than a typical pact between two independent parties, as “the RMOW is looking to be a good partner to WDC in this case,” Price said.

“So we’re not taking security, we’re offering a very favourable interest rate on the debt—there’s a lot of concessions that have been made in order to ensure that the WDC can be successful in the project.”

“That gives us a bit of an early look, [so] if costs are to escalate, if the real estate market starts to change, we can get a little bit ahead of that.”

As structured, the sale of the 18 market lots on Parcel D3—expected to bring in about $16 million, after servicing costs—stands as the main safeguard to Whistler taxpayers.

Whistler’s real estate market has been hot for months, “but we don’t know what the future looks like,” said chief administrative officer Virginia Cullen.

“We also know that there are a number of different people or different economists pointing to the risks associated with the housing bubble in Canada, so that is something for us to be aware of as we move forward with this project.”

Factoring in the WDC’s existing $9.37 million in debt, it’s expected that the project will generate between $3 million and $6 million in net profit, which would be transferred to the Cheakamus Crossing Affordable Employee Housing Reserve Fund to help fund future projects (a mandatory requirement under the Community Land Bank Agreement with the provincial government).

“That piece does provide a bit of cushion,” Price said.

“[It] means that project costs and revenues could change together by up to $6 million, and it would have no effect on the WDC’s ability to repay the debt associated with this project.”

However, if those figures change beyond that mark, “we start to see different effects, which could include the non-repayment to RMOW of the loan amount,” she added.

Given the enormous financial pressures COVID-19 has placed on the community, the RMOW opted for a lower tax increase in last year’s budget, meaning Whistlerites can expect higher increases in the coming years—placing even more importance on a solid agreement for funding Cheakamus Phase 2.

“The reason we need to be careful in ensuring we have these agreements in place and the expectations for performance of the project are clear, is so that we don’t end up in a situation where the RMOW has lent money permanently to the WDC,” Cullen said.

“Because if we do that, essentially money is moving out of our reserves that are supposed to be meant for maintaining existing municipal assets and other projects. So it would eventually impact tax rates.”

Though the WDC’s intention from the beginning was always to pay off its outstanding debt using the sale of market lots, when housing availability grew tight in 2016, several parcels were donated to be used for new Whistler Housing Authority (WHA) builds on Legacy Way and Cloudburst Drive.

The topic of the debt, as well as the requirement for the WDC to do quarterly reporting, led to a lengthy discussion at the April 6 council meeting (watch it in full at whistler.ca).

WDC’s concern is one of expediency, said Councillor Duane Jackson, who oversees council’s housing portfolio and sits on the WDC board, and requiring in-depth quarterly reports prior to allowing WDC to access funds may not be realistic.

“We’re happy to share the budgets, as they are today … we just can’t account for everything in the timeline we’re going to need to draw [the funds] for,” Jackson said.

“So we’re wanting to meet your needs, but in the interim, I think what we want to do is go for the gold standard. We can’t deliver it this week, which is really when we need to be [moving ahead].”

“We just need an update on where the project is—what’s been spent in the last three months, what you plan to do in the next couple,” she said.

”It’s pretty straightforward, and we’re not looking for anything fancy with a gold seal on it.”

After an extended discussion, council supported the move unanimously.

“Every single one of us campaigned that we would build housing. The hour is late. We’re more than halfway through our term, and it’s time for us to get moving.”