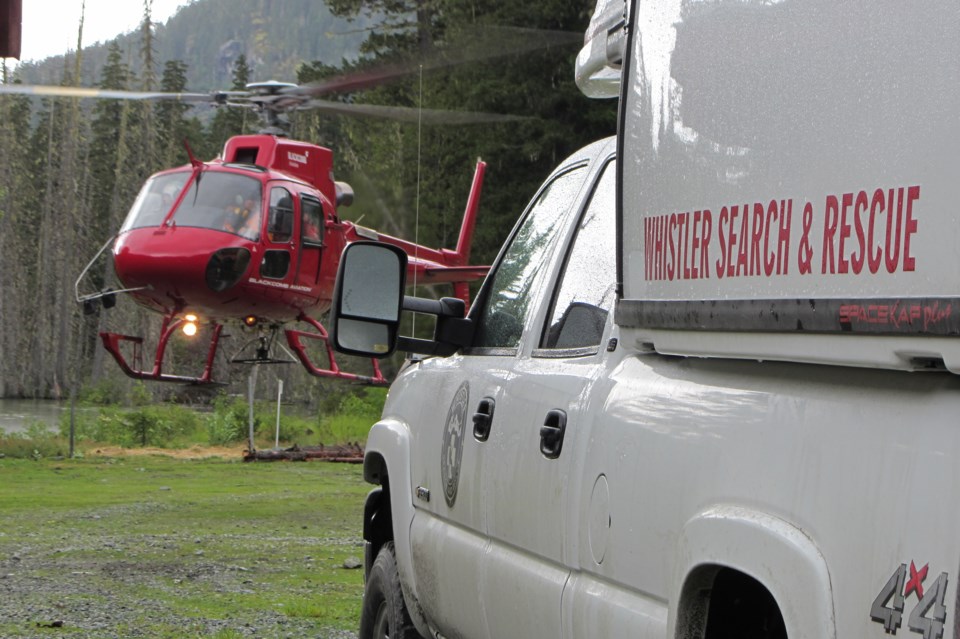 While call volume remained steady, Whistler Search and Rescue saw a significant spike in mobilizations over the past year. PHOTO SUBMITTED

Like other search-and-rescue groups across B.C., Whistler Search and Rescue (WSAR) saw a surge in mobilizations over the past year, as more recreationalists have taken to the backcountry during the COVID-19 pandemic.

“That’s basically the entry-level recreationalist, the one that’s disoriented or dehydrated, exhausted, people that have just overstepped their boundaries and are reaching out,” said WSAR manager Brad Sills of the spike. “We see it in those three months of August, September and October. It’s typically entry-level pastimes like hiking.”

The summer (43) outpaced winter callouts (33) this year for only the second time in WSAR’s history, with hiking (28) making up the lion’s share of those requests by activity. Ski mountaineering came behind with 14 calls, followed by snowmobiling (seven), climbing (four), out-of-bounds skiing (four), and mountain biking (four).

Notably, despite the pandemic-fuelled recreation boom, mountain biking continues the downward trend of recent years with only four requests, down from seven last year and nine the year prior, although mountain biking incidents are still more likely to lead to serious injury.

“You have to be significantly hurt to not be able to get out on a bike. People will bike out with dislocated shoulders, as bizarre as that sounds,” Sills said. “So just overall, we tend to see the incidents of ‘biking wounded’ to be much higher than ‘hiking wounded.’”

Whistler’s municipal area and Rainbow Mountain tied as the most common site for WSAR crews last year, at 11 callouts, followed by Powder Mountain (10), the Garibaldi Lake area (10), and the Spearhead Range (eight).

The 76 team mobilizations consumed approximately 1,249 volunteer man hours, the equivalent of 52 days. In all, the tasks involved 86 individuals, 58 of whom were male, and 24 female, reversing a recent trend that saw women making up a larger proportion of WSAR’s callouts. The 86 individuals were spread fairly evenly across age groups, countering a historical trend from a decade ago, Sills said, when the call volume was more heavily weighted towards young males aged 15 to 25.

“It seems to me that the incidence of accidents is equal amongst all user groups, so that’s a more representative gauge of the actual risk of the sport itself and not maybe of the behaviour,” he noted.

Thirty-three of the mobilization tasks were deemed medical rescues, while 14 were considered search missions, and 29 evacuations. Half a dozen incidents resulted in deaths last year, including a string of avalanche fatalities earlier this winter when the snowpack around the Sea to Sky was considered risky and unpredictable.

Whistler’s data tracks with a wider provincial trend. According to B.C.’s public safety ministry, ground search-and-rescue (GSAR) groups were deployed 1,959 times between April 2020 and April 2021, an increase of nearly 25 per cent, making it the busiest year in B.C. SAR history.

“B.C.’s 79 GSAR groups have been pushed to their limits,” said Chris Kelly, BC Search and Rescue Association president, in an April 3 statement. “COVID-19 has made risky work even more dangerous for each individual. I implore anyone heading out into the elements to do their part by planning ahead.”

Sills was quick to point out that, while an influx of relatively inexperienced recreationalists has led to a rise in callouts locally, especially in summer, when the injuries tended to be less severe, the risk posed in the backcountry this winter wasn’t relegated to new user groups.

“The four avalanche deaths that we had this year in the Sea to Sky were all very, very experienced users,” he said. “I think we’ve got to get over this notion that this is a newbie phenomenon. There is another factor at play here. I don’t know exactly what it is, but I think it’s probably complacency.”

Around this time last year, facing the uncertainty of a burgeoning health crisis, Sills called for recreation in the B.C. backcountry to be suspended. While Sills stopped short of making the same call now (“I ignited a firestorm when I said that last year,” he said with a laugh), he acknowledged there remains a significant risk to volunteer crews who, like other first responders, have yet to be vaccinated.

“The threat is still there,” he said, adding that a WSAR member recently contracted the virus. “Police, fire and SAR are not vaccinated, and with this new P1 Brazilian variant, it is disconcerting.”

Sills said health authorities told him WSAR members would be vaccinated this week, “but that was also said last week.”

Chris Nelson, Deputy Fire Chief for the Whistler Fire Rescue Service, confirmed to Pique that a number of local firefighters are currently positive with the virus, and the department has been given no indication of when they will be immunized.

“My only comment is you can shut down a dental office but you can’t shut down a fire department,” he wrote in an email.

Whistler Search and Rescue is reminding people to go out prepared
Oct 14, 2020 9:00 AM
Comments