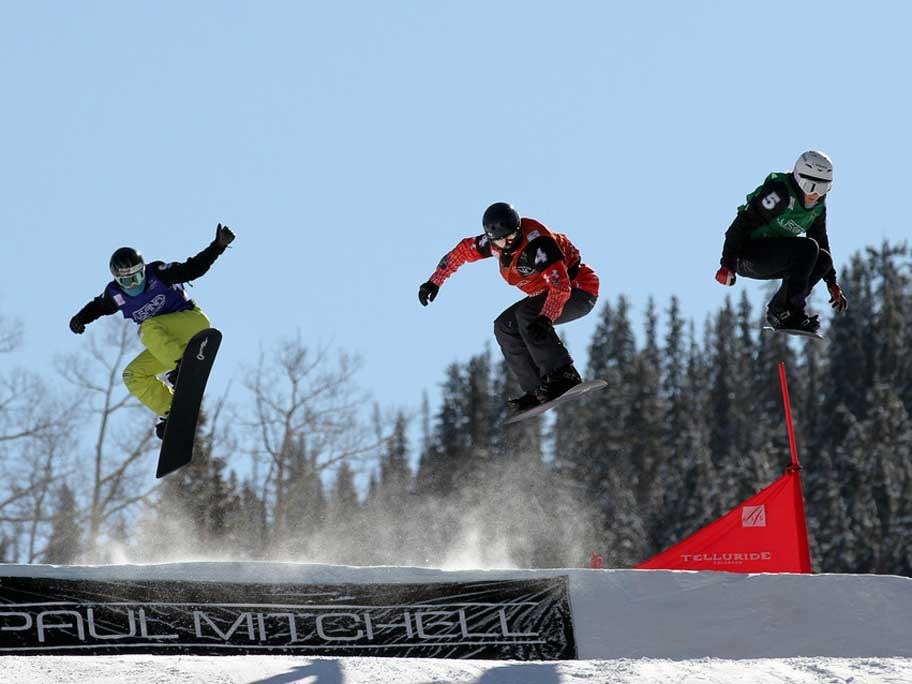 In Telluride, Chris Robanske of Calgary — a relative newcomer to the national team — earned the first World Cup podium of his career with a second place finish between Pierre Vaultier of France and Nick Baumgartner of the U.S. Maximilian Stark also made the finals and placed fourth overall.

The result took Baumgartner by surprise.

"I wasn't expecting much from the race today," he said.

"My plan was to stick to my riding goals and let the outcome happen. I've been out for almost a year since an injury at the X Games last January. It's been a long recovery and I want to thank everyone at Level 10... and my coaches. I probably owe them a beer or two."

The other Canadians struggled in the finals, despite a strong showing in the qualifier. Kevin Hill was 18th and Robert Fagan 21st to round out the top 30.

On the women's side, Canada had two athletes charging into the semi-finals with Dominique Maltais and Maëlle Ricker in the gates. Maltais moved on to the finals, where she placed second overall behind Lindsey Jacobellis of the U.S. and ahead of Deborah Anthonioz and Chloe Trespeuch of France.

Ricker, coming back from her eighth career knee surgery, made up for her loss in the semi-finals to win the small finals and place fifth overall.

"I'm really happy with the result," said Maltais. "The big final was very close. I tried to get around Lindsey but ran out of time in the end. The first World Cup of the season, there is always a lot of stress. It feels great to finish on the podium."

Following the race there was a team snowboardcross event, a variation of the sport that made its debut in the World Championships last season. It wasn't approved for the 2014 Winter Games, but is considered a candidate for 2018.

The team event is similar to a regular snowboardcross with four racers in the start gate, but where it gets interesting is that as soon as the first group is out of the gate the second group slides up and gets ready. When the first rider reaches the finish they open the gate for their teammate.

Team France took the win on the women's side, followed by Maltais and Ricker for Canada. The U.S. team was third. For the men it was also France in first, followed by Team U.S.A. and Team Norway.

The top Canadian was Caroline Calve in 11th, followed by Marianne Leeson in 19th, Ekaterina Zavialova in 26th and Ariane Lavigne in 29th.

On the men's side, Austrian Benjamin Karl bested teammated Andreas Prommegger for the win, while Simon Schoch upset the possibility of an Austrian sweep with a win over Anton Unterkofler in the small final.

The top Canadian racer was Matthew Morison in ninth, with Jasey-Jay Anderson in 23rd, Michael Lambert in 25th and Darren Gardner in 29th.

Canada's prospects in snowboard slopestyle are off to a great start this season with athletes taking three medals at the Winter Dew Tour – Nike Open in Breckenridge last weekend.

In the men's final, Gjermund Braaten of Norway was near perfect. He took the win with a score of 97.75 out of a possible 100.

Canada's Sebastien Toutant didn't do too badly on his way to a silver medal with a score of 96.0, while Charles Reid — also from Quebec — placed third with a 90.0. Mark McMorris also made the finals for Canada, placing seventh.

On the women's side, Vancouver's Spencer O'Brien — a regular at Whistler — placed first overall with a run that emphasized her rail skills and jumps that were a little bigger than what anyone else was doing.

She was followed on the podium by Enni Rkiajarvi of Finland and Sarka Pancochova of Czech Republic.

The American snowboarders dominated the halfpipe, with Olympic champion Shaun White winning the men's superpipe, followed by Louie Vito. Iouri Padloachikov of Russia snapped up the bronze medal, but other than two riders from Japan nine of the top 12 spots went to American riders.

On the women's side, Americans Kelly Clark and Gretchen Bleiler were first and second while Xuetong Cai of China placed third.