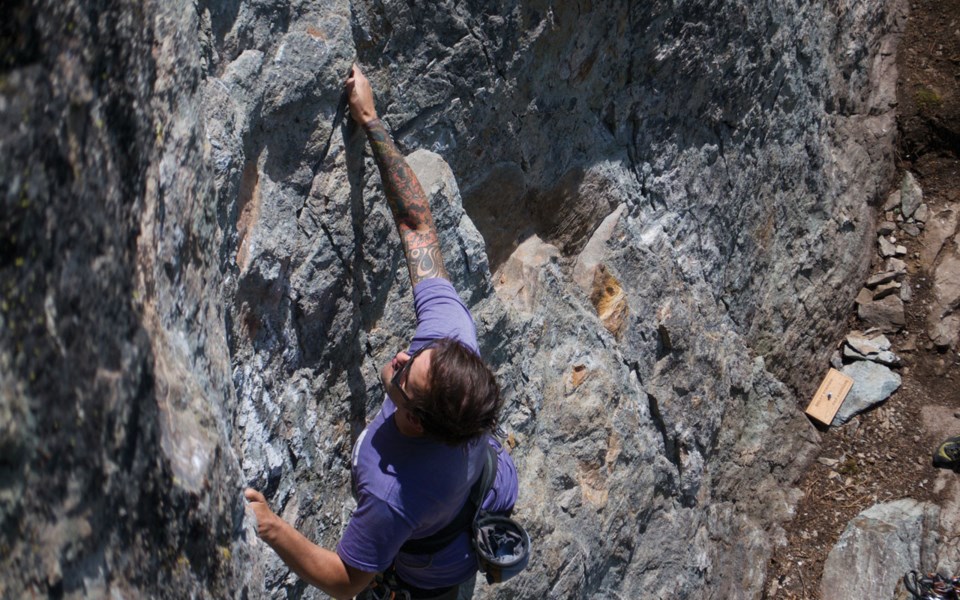 THE WAY UP Alec Fernandes climbs a newly constructed route on Whistler’s south side. PHOTO BY MATT TURNER

Kirk Paterson and a friend happened upon a rock face on Whistler’s south side in 2007 and, being unable to get to the major routes in Squamish at the time, opted to create a couple of sport climbing routes there.

With intermittent use, the routes mossed over. Meanwhile, Paterson moved on to build routes in areas all over the corridor but saw some Facebook chatter about the site about a decade later.

A post wondered who the original builders were and, reinvigorated, Paterson and another climber, Alec Fernandes, set to work revitalizing the area with more than a dozen new routes, finishing the years-long project, with some help, earlier this month.

“Because of Facebook, people got more engaged. Alec and I have been the main ones, but there are quite a few people here and there,” Paterson said. “Our goal that kept us going was to get enough climbs to make it into an area so that people would go there. We’ve got a variety of climbs so that different people will come.

“If you’re a different level than your friend, there’s something different to climb.”

Paterson was initially drawn to the site, located between Alpha Lake and Function Junction, with a vision to expand the resort’s climbing scene.

“It’s a great area. It’s the main one in Whistler, but we just thought that there should be more variety,” he said. “Nordic, also, is really good for beginners and easy, and there’s also some really good hard stuff, but there’s not a lot of in-between stuff, and a lot of climbers are in the in-between level.”

When building initially, Paterson recalled targeting routes that were easy to climb, but, being new to route setting, turned out to be challenging to build.

“We might have picked kind of a hard one, a labour-intensive one,” he said. “Some routes, you just scrub them quickly and they’re good to climb, [but] this one, it’s three-dimensional inside the chimney with a lot of moss and a lot of cleaning and shrubbery,” he said.

When revisiting the site, Paterson said the first move was to get the two existing routes up to snuff before creating additional climbs.

Fernandes, meanwhile, has spent three to six days a week working on the area for the past three years.

After 20 years of climbing in Squamish and at the local Nordic and Cal-Cheak areas, he relished the chance to create something fresh.

“When I saw a new spot with possibilities for the climbing community in Whistler, I kind of just went for it with Kirk,” he said.

Fernandes noted that, since routes are built from the top down, this particular area was a challenging one to design, given it’s difficult to reach the top in order to install the initial anchor. From there, builders start to whale away on the face in order to make it as safe as possible for climbers.

Fernandes acknowledged that he and Paterson have different approaches to building, as Paterson appreciates the mountaineering aspect of the sport and embraces heights, while he admittedly has a touch of acrophobia.

As well, Fernandes is dedicated to the site being spotless.

“I’m more of a picky cleaner. I want it to look very nice so when people show up, they want to come back again,” he said. “I pretty much have scrubbed every square metre of this rock with iron brushes.”

In addition to the years of sweat equity, the builders are financially invested.

Each bolt and hanger is roughly $5, with each route needing 10 to 15, so both are in for a couple hundred dollars apiece, though Fernandes noted the Squamish Access Society’s bolt fund chipped in with enough bolts and hangers for three routes.

The site could be enhanced before long, Paterson said, as another builder asked about the area above the current area and plans to start building there.