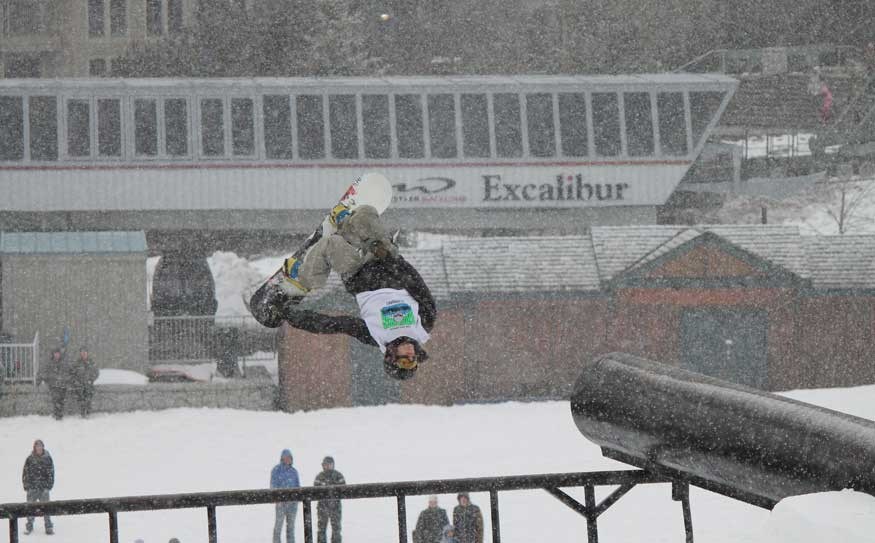 Cannon fodder A competitor gets inverted on the cannon feature at the 15th annual Showcase Showdown on March 31. Photo BY amdrew mitchell

The forecast isn't always accurate, but none of the competitors in the 15th annual Showcase Showdown on Saturday — billed as the longest running snowboard event in Canada — were prepared for snow. In many cases, athletes were forced to hike a lot higher than the start ramp or get in some mid-day waxing to ensure that they would have enough speed to clear the massive gap jump.

"Today was just a little bit hectic — nobody thought it was going to snow," said men's winner Jesse Millen. "During the practice session everyone had speed, but in the second heat things started to run a little slow. Then it started snowing and running even slower, so by the time it ended we were starting maybe 50 or 100 metres higher up the slope, getting bro-towed in to get some speed.

"I'm glad nobody got hurt. A lot of people were throwing down and some were knuckling pretty good — I didn't want anyone to fall into that gap or anything."

The course started with a 25-metre gap jump, with a five-metre-deep gap between the takeoff and landing. After that was a set of double rails leading to the final feature — both left and right down rails, a perpendicular rail to jump over/board slap and the "cannon" — a thick pipe angled upwards that gave competitors a chance to throw serious spins and inverts.

Millen's score of 91 in the finals was worth $2,000 — almost enough to fix a friend's car he damaged a few weeks ago backing into a pole. Although he's qualified for the finals before, it was his first big win in a contest. His run included a frontside 900 spin over the gap, a boardslide on the double rail and then a 270 spin onto the cannon with a 450 spin out.

"I tried to mix it up... but I was definitely keeping tabs on what other people were doing. When you play the contest game you know what people are doing and do the tricks you've got down. And the course was such a fun course — Brad Broughton builds a course really well... and that top jump was immaculate."

Millen is hoping to get an invite to The Shred Show during the Telus World Ski and Snowboard Festival this year, which is now a TTR-sanctioned event. If he doesn't get an invite he'll look to get in through the qualifiers, like he did last year.

"They have a slopestyle this year, which I'm really excited about, and there's also a big hip jump competition that is right up my alley," he said.

In second was Aaron Johnson, winning $1,000 for his efforts with an 88. Warren Williams was third with an 86.

On the women's side the win and $750 went to Jess Rich, an Australian rider who has called Whistler home since January. She also lived here previously, which is where she got into snowboard competition.

"I'm so stoked," she said of her score of 94. "We came in today and it was super snowy, and I didn't really know how it was going to go."

While it can be a long day at these events with training, two qualifier runs and three runs in the finals (averaged out for score), the fact that the venue was at the base of Whistler this year made it possible for riders to get warm and dry their gear between runs.

"We went and had a break in between runs, waxed our boards and had a coffee, but other than that we were pretty much on our feet the whole time. But I think everybody had a chance to get inside and dry off a bit," said Rich.

Her winning run was a backside 360 with tail grab off the top jump, followed by a cab 180 onto the double rail and wall, and a frontside slide down the rail.

While the gap looked intimidating from the sidelines, Rich said they didn't worry too much about it.

"To be honest I don't concentrate on that (kind of thing) until I hit the jump first, I don't even look at it. And after that you know how it rides so it doesn't matter, and you don't worry about it."

The next big snowboard contest is The Shred Show during the Telus World Ski and Snowboard Festival. Athlete registration is available online at www.wssf.com.