Next generation officially takes over after Osborne-Paradis’ retirement
Nov 6, 2020 9:00 AM By: Dan Falloon 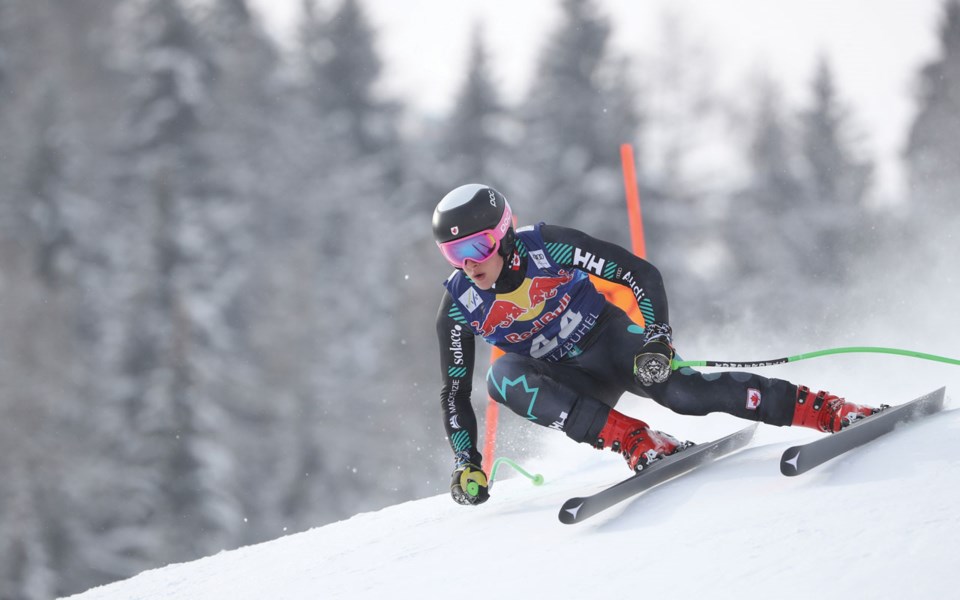 Though Manny Osborne-Paradis wasn’t around the Alpine Canada men’s speed team much as he recovered from injury in recent years, the veteran’s recent retirement made it clear that the torch has been passed to the next generation.

Several Whistler Mountain Ski Club (WMSC) alums will be leading the way, as Cameron Alexander, Jack Crawford, Brodie Seger and Broderick Thompson will all look to take the next step on the FIS World Cup circuit this season.

At 26 years old and with 37 World Cup starts and a Winter Olympics under his belt, Broderick Thompson will take over as the squad’s elder statesman. However, Thompson suffered a serious knee injury while training for the 2018-19 season and hasn’t lined up in a World Cup start gate since March of 2018.

Thompson feels like he’s back to where he was prior to crash and feels like he’s in a place to bounce back when the men’s speed season kicks off with the downhill at Val d’Isere, France on Dec. 12.

“I’m feeling pretty good, normal after my injury,” he said. “It’ll be different starting in Europe, but it’ll be good for us starting on the road and continuing to build as the season progresses.”

Having been injured mere days before Osborne-Paradis, Thompson is less used to the prospect of a Manny-less team than some of his teammates.

“It’s a different vibe, but it’s good to have a young, strong, enthusiastic group,” he said. “Me being the oldest now is something I can work with.”

The team recently enjoyed excellent weather conditions at seven-week preseason camp at Saas Fee, Switzerland, and after quarantining and a rest period, headed east on Nov. 1 for a month of training, two weeks each at Nakiska and Panorama, before heading overseas for the season.

“We had some really great training sessions [at Saas Fee]. We got quite a bit of speed training compared to our previous preseasons, which was really cool to see because I think that was a big concern coming into this year,” Seger said.

After returning from Switzerland, athletes quarantined at an Anderson Lake cabin provided by Joey Gibbons.

Subsequently, the racers headed back to their old WMSC stomping grounds to train. Seger said the club regularly welcomes back its past athletes with open arms, but it was especially helpful after Alpine Canada opted against returning to its Canadian Sport Institute headquarters in Calgary.

“They’re making sure we have a good place to get our work done because it’s not always so easy to find a gym,” he said. “For the majority of our group, it’s like working from home.”

Normally, the speed athletes would get to start the season at home at Lake Louise, but because of the pandemic, FIS opted to contain the campaign to Europe. Even then, the racers are ensuring they’re ready for anything.

“There’s just a lot of uncertainty around the schedule,” Alexander said. “Even with the World Cup, they have a schedule, but you don’t know if they’re going to change it.

“You just have to be ready for the unexpected like anybody, really.”

“Once you get past a month or so, you get into a rhythm and it all starts to fly by a little bit quicker than you think,” he said. “It definitely will be the longest trip away from home I’ve had so far, but I think I’ll be able to manage.”

Seger, who has six career top-30 finishes in 29 starts, feels like he’s ready to break that threshold with more regularity.

“I’ve seen that I clearly have the speed to be in the top 15 and I just need to work on developing my consistency so that I can move my way up the ranks and get into the top 30 on the World Cup start list,” he said. “Then I have a much better opportunity to be in there any day.

“I’d say that for us all as a group, that’s a similar theme developing. We had a lot of races last year where we had one guy punch into the top 30 and just about every single one of us has done it once. But we’ve never had more than one guy in the top 30.

“We’re skiing at way too high of a level to not be starting in the top 30,” Seger added. “We’re all too hungry and want to show what we can do.”