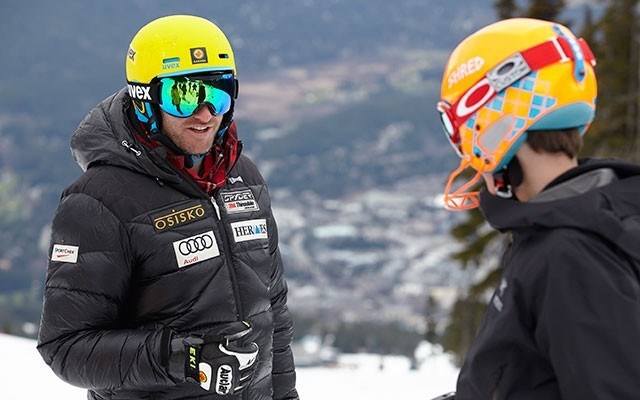 Three-time Olympian Mike Janyk is returning to his roots. He’s taking over as Whistler Mountain Ski Club’s executive director in May, where he’ll be able to pass on his experience to a whole new generation of ski racers.File photo, submitted

After five years of regularly making the trek down the Sea to Sky Highway for his role as program director of the Grouse Mountain Tyee Ski Club, Whistler local Mike Janyk is gearing up for a much shorter commute.

“I have to pinch myself a little,” Janyk admitted. “It really is kind of wild to come full circle … I’m humbled by it, one, and stoked and excited on the other side of it too.”

Janyk officially takes over the reigns from Bob Armstrong May 15. Armstrong will return to the prestigious ski-racing club in his long-time role as sponsorship manager and coach, after stepping in as executive director one year ago when the club’s former leader, Mark Tilston—Janyk’s brother-in-law—accepted the job of Alpine Canada men’s head coach.

“I’ve already chatted with Mark,” Janyk said. “It’s nice to have someone to bounce off of. With Mark and with Bob who’s there now … there’s good support around me, that’s for sure.”

While he didn’t relocate from Whistler while working at Grouse, the new gig is still serving as a homecoming for the 39-year-old. He began skiing in Whistler Blackcomb’s J4 program before rising through the ranks of the WMSC himself. He went on to join the Canadian national team, and in 2009 become the first Canadian man to ever land on the slalom podium at the world championships with his bronze-medal win. Janyk retired from racing in 2014.

With WMSC’s history as one of the strongest ski clubs in the country, Janyk said he’s motivated by the potential to have a greater impact on the sport he loves most. He’s hoping to use his experiences on the slopes and the world cup circuit to help develop the next generation of athletes in a few different ways.

“I have a technical eye for the sport, so that helps," Janyk said. "I know what it took for me, and for my teammates—the work ethic—and so I can help guide a lot better, because I have an understanding of what it takes."

But perhaps most importantly, he also knows that good results aren’t always accompanied by the sense of total fulfilment that an athlete might expect to feel after landing on top of the podium. “I think my biggest strength in coming back is not playing into that falsehood of getting your identity caught up in the results,” he explained.

In addition to that shorter commute, the WMSC alum said he’s most looking forward to re-connecting with his hometown through his new position. “To be here in the community and be able to engage with where I live and now where I work, there’s some super cool collaborations” that can be pursued, he said.

Reflecting on his last half-decade spent working on the North Shore, Janyk said he’s proud of his work to help retain athletes through to the program’s end, and to shift the club’s culture over the course of his tenure. For one, implementing a slogan that challenged both athletes and coaches to “Dare to Care,” he explained. That, in turn, helped inspire kids to believe in themselves enough to put in the effort; to dream big and believe those dreams are possible, Janyk said.

“You realize how much of a killer apathy is," he added.

What he’ll take from his time at Grouse—as well as his work consulting with the BC Alpine Ski Team as a performance coach in the off-season—is a continued focus on creating a well-structured program and providing a clear vision, and most importantly, prioritizing holistic development that puts athletes’ and coaches’ well-being first.

“That’s such a passion of mine—facilitating performance, but helping [skiers] tap into the emotions around performance and working on mindfulness and body awareness and those kind of things,” he said.

In addition to his experience as an athlete, Janyk co-founded the Mike and Manny Foundation alongside Canadian teammate and fellow WMSC alum Manuel Osborne-Paradis, prior to running the Tyee program. The foundation provided an annual four-day ski camp with all expenses covered for 10 to 15 young ski racers from across Canada,

“The WMSC Board was quite excited when the opportunity presented itself to have Mike take on the Executive Director role at WMSC. Mike’s World Cup experience speaks for itself; however, it is Mike’s five years as Tyee’s Program Director, proving his ability to manage a ski racing development program to the highest standards, that makes Mike the perfect candidate for this role at WMSC,” wrote WMSC board chair Robert Toole in a release.

“Taking on the Executive Director role at WMSC is a natural progression for Mike and it positions the Club with a leader who can take the Club to the next level in the decade ahead. Particularly as we come out of the challenging global pandemic period, it’s exciting to look forward with renewed excitement to next season.”