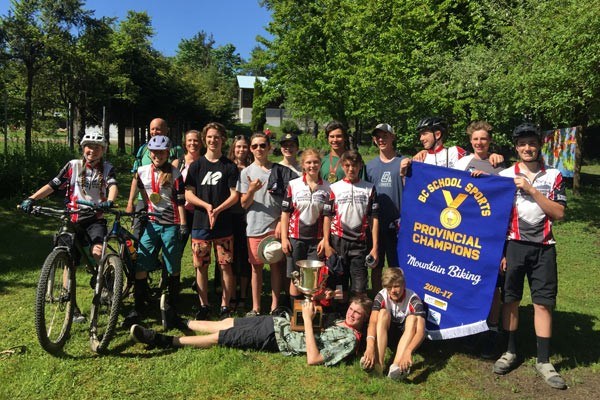 Pemberton Secondary School (PSS) may be small, but it has a pretty big contingent of mountain bikers.

On Saturday, May 27 in Cumberland, PSS beat all comers — including athletes from much bigger schools — to earn the BC School Sports provincial championship. It was the school's first independent provincial title after having won two alpine skiing titles when paired with Whistler Secondary School.

Head coach Nicole Jean said the community naturally raises its share of bikers, so the numbers to create a contending team were certainly available.

"We have a really large mountain-biking community in Pemberton... A lot of the kids mountain bike by themselves already, so we've been encouraging the kids to come in and make them feel like it's a team sport, not just an individual sport.

"They encourage each other as a group rather than celebrate each individual achievement."

The championships, made up of a cross-country race and an enduro race, tested the riders, and Jean was proud of all the team members for riding to their respective limits.

"They all performed as well as I thought they could and all did really well. It was just the stars all aligning. Pretty much every rider's position counted because we were so close to Salmon Arm," she said.

One rider who's had a challenging season is Ella MacDonald, as she sustained an injury early on in the campaign but found out about a week before provincials that she'd be cleared to attend.

The Grade 10 student ultimately took first in the cross-country and third in the enduro en route to the age-group queen of the mountain title.

"I wasn't expecting to do very well because I just had a sports injury a few weeks earlier. I broke my arm but I got healed and the race went really well," she said. "I biked about three times before provincials and then went to the race."

MacDonald said while much of the terrain was easier than at home, there was still the odd challenge that kept the riders alert.

"It was pretty easy single-track climbing because in Pemberton, we have a lot of single-track climbing, so I think other teams might have found that hard, but it was relatively easy for us," she said. "... But then all of a sudden there would be a bridge that's rickety and sketchy and you'd have to ride through and keep moving or you'd mess up some little part."

Grade 10 rider Joe Davies was thrilled to get the chance to ride on some flowy trails away from Pemberton.

"It was nice to get a different feel for a different place," he said. "Pemberton is mainly hard climbs and then straight down. Over there, their trails are a lot flatter and meandering up and down.

"It was the first time I'd ridden trails like that and I really enjoyed them."

Davies took fourth in the cross-country and ninth in the enduro to land fourth overall.

Meanwhile, Grade 9 athlete Jack Hartman took fifth in the cross-country and ninth in the enduro as he placed fifth overall in his division. His major takeaway from the season was developing a true need for speed, which helped amp up his results.

"I started off not as well as I'd hoped, but I finished with a good note," he said. "I realized I could go faster than I've been going... I (had been) just going a bit more relaxed, having a bit more fun, not being as competitive."

Jean said the Cumberland site played a helpful role in the win, where its differences were beneficial, while there were enough similarities that riders weren't caught offguard.

"It's not as steep," Jean said with a laugh. "There were a little flatter courses, but in some ways, there was some familiarity... They're amazingly well groomed and the features that the locals have built are lots of fun.

"It's not as rooty and wet as it was last year in Coquitlam or, say, biking in Squamish. It's drier like Pemberton so in that regard, it was kind of similar."

The Devils could potentially be looking at a bit of a dynasty, as they'll have the same team back next year with the hopes of adding reinforcements as well.

"We have a particularly strong group of Grade 10s and Grade 9s, too, actually," she said. "We're trying to encourage more Grade 8s to join, so we hope we can get even bigger. We don't have anybody leaving next year, so we're hoping to repeat but for now, we're just going to be happy we won this year."

Other Pemberton athletes to shine were Lucas Cruz, who won the Grade 10 enduro, while Avery Hargitt tied for fourth. Arriya Kuiper, meanwhile, was fifth overall among Grade 9 women, while Fiona Davies was fourth overall for Grade 10 women and Cassia Jean was sixth in the Grade 11/12 event.