Pushing adaptive mountain bike instruction forward in Whistler and beyond 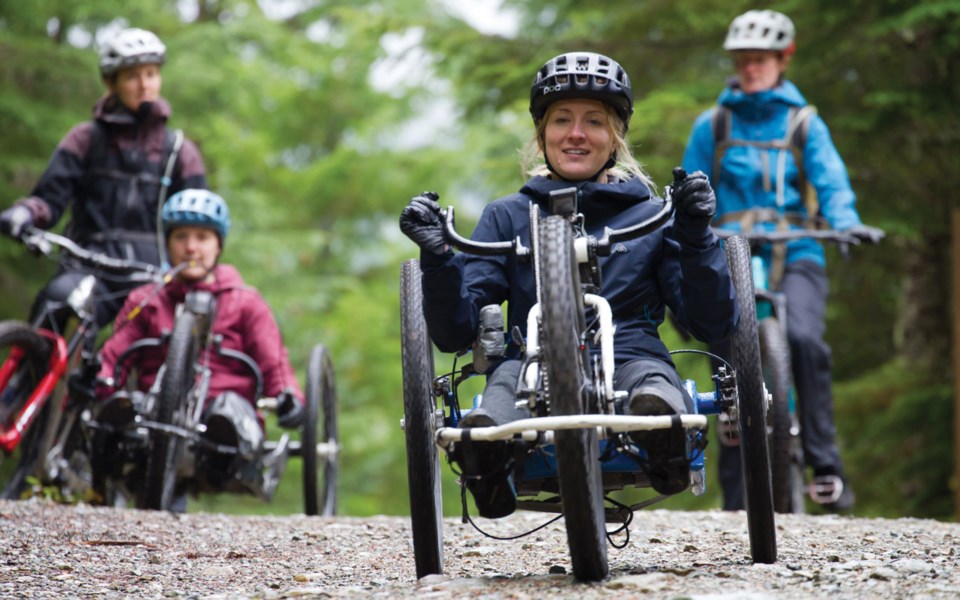 As a sport, adaptive mountain biking seems primed to take some steps forward in the years to come.

Multiple projects are currently in development to help formalize the activity and create some additional opportunities for riders.

To start, the Professional Mountain Bike Instructors Association (PMBIA) has worked with Whistler Adaptive to create an adaptive training module in order to help round coaches into form.

PMBIA technical director Paul Howard said the project has been in development for roughly two years and saw its first tangible results with a recent course with Whistler Adaptive and Kootenay Adaptive Sports Association representatives.

“We’ve been talking to Whistler Adaptive for a while and they’ve been really good in helping us develop the module,” he said. “What we’ve essentially done is we’ve taken the core concepts of the PMBIA methodologies and just adapted them to adaptive bikes and adaptive students.”

After the first session in Lost Lake Park, Howard is eager for participants to provide feedback and ideas to help develop content in order to improve the module.

Whistler Adaptive executive director Chelsey Walker is thrilled with the partnership, noting that a memorandum of understanding between the two groups to develop Whister Adaptive’s coaches is forthcoming.

“The PMBIA reached out to us last and looked to partner and take this past 10 years of mountain bike development we’ve worked on,” she said. “By using an existing format that is so well regarded in the industry like the PMBIA certification pathway, it allows us to work together and use the same training certification pathway.”

Howard explained that the major differences between the newly developed content and previous PMBIA instruction revolves around adaptive equipment and how to lead riders who have different abilities.

The module currently focuses on three-wheeled bikes for paraplegic and quadriplegic riders, but there are hopes to reach out across the spectrum of abilities to include those with cognitive, visual or other physical challenges.

“It helps to keep it simple so everyone’s not overwhelmed,” Howard said. “We’re starting there, we’ll see how it goes and we can build on that in the future.”

Pandemic pending, Howard said plans are in the works to hold the one-day course in Whistler on a few occasions in the spring while other offerings beyond Whistler are possible as well. The PMBIA is also working to develop an online version of the module.

In the longer term, Walker said there are hopes to create a unified national group to promote and advocate for adaptive mountain biking that could have a hand in everything from trail building and design to holding competitions. There are hopes to formalize the association within the next year.

“It’s a way for us all to work together under a single voice instead of every group trying to advocate on their own. It also helps provide some leadership for adaptive mountain biking,” she said, noting the organization would help set standards as well.

Heading into winter, Walker explained that the organization is developing its return-to-sport plan to submit to stakeholders such as Whistler Blackcomb and Whistler Olympic Park.

“What’s going to be different this year is we’ll be offering alpine programs in more of a club or freeride format,” she said, noting that venues including WB have been supportive of the club’s programming this winter. “It’ll be even more focused on locals.

“It’ll be very similar to what was happening before.”

In order to support the organization’s programming, Whistler Brewing will release a red ale in the near future, with a portion of the proceeds going to Whistler Adaptive.