Rather than have a separate category the organizers of the RBC GranFondo Whistler will reconfigure the start area to accommodate the licensed riders.
Dec 21, 2011 8:00 PM By: Andrew Mitchell 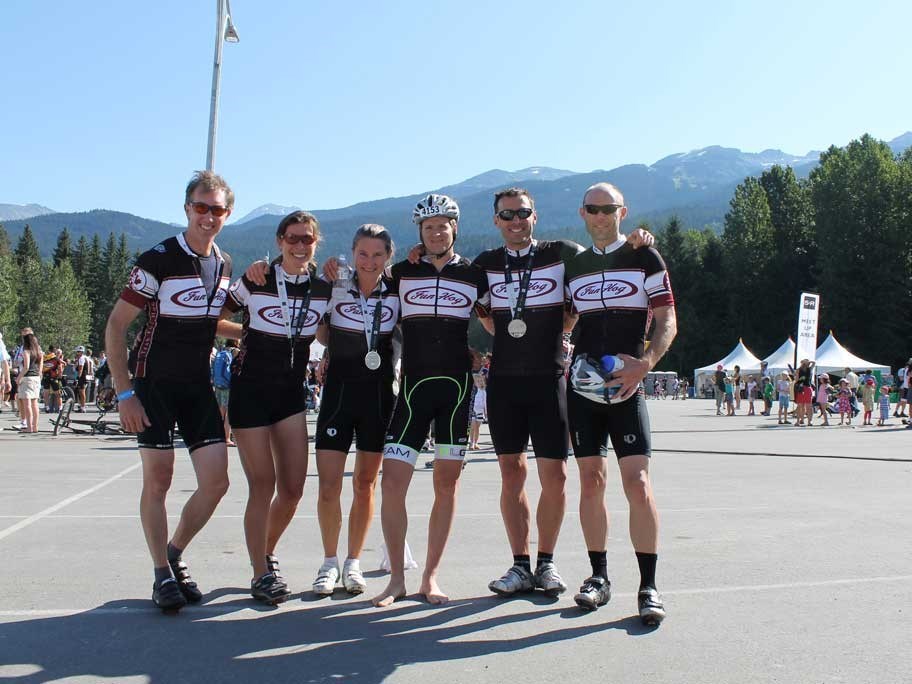 Rather than have a separate category the organizers of the RBC GranFondo Whistler will reconfigure the start area to accommodate the licensed riders.

"Our team at GranFondo Canada is committed to delivering a unique cycling experience," said event co-founder Kevin Thomson in a statement. "Racers have told us they want to ride together and that they appreciate having a timed course. With some slight changes to the GranFondo start, we will be able to provide what they are looking for by including them in the full GrandFondo event."

There are a few advantages of the change. Starting the elite riders with the mass start gives up and coming riders a chance to test themselves against some of the fastest riders in Canada. It's also a benefit for mixed teams, where a few athletes would compete in elite and the rest in the age categories — now they can race the course as a team.

It could also shorten road closures slightly, with one start time for all riders and the potential for keeping the field a little closer together for the first part of the event.

Early bird registration for the 2012 GranFondo Whistler ends on Jan. 6, going up in price by $25 after that.

The RBC GranFondo Whistler starts in downtown Vancouver and finishes in Whistler, following a 122-kilometre route up the Sea to Sky Highway.

Getting into the annual North Shore Credit Union Test of Metal is almost as hard as the race itself, selling out for the last 10 years running. The speed at which the race sells out also gets faster every year, as fast as the technology will allow anyway, and last year the race sold 800 general registrations in just over 22 minutes.

If you're planning to race this year and missed the local registration, you're going to want to be online at least five minutes before registration opens at 6 p.m. on Jan. 1, and have your information handy including credit card numbers. Fast typing is also an asset. You can register up to four people so it makes sense to get together with friends somewhere with a fast Internet connection to increase your chances of getting into the event.

Registration is accessible through www.testofmetal.com.

The NSCU Test of Metal is a 67-kilometre point-to-point mountain bike race in Squamish, with over 35km of single-track.

The inaugural running of The North Face Whistler Half Marathon was a huge success, with all 750 spots selling out just hours before the end of the early bird rates. Organizers added another 50 spots, which sold out almost instantly.

There's a good chance that interest will be high again for this year's race, taking place on Saturday, June 2, so early registration is recommended.

The run is 21.1 kilometres, starting and finishing at Whistler Olympic Plaza, following a mix of road and valley trail. The route will be similar to last year, weaving in and out of neighbourhoods.

The Canadian Olympic Committee has created a new Olympic Red Mittens contest, in cooperation with the Hudson's Bay Company.

Until Jan. 1, the COC is inviting mitten wearers to post their photos online on the Canadian Olympic Team Facebook page or by tweeting @CDNOlympicTeam using the hashtag #redmittens. The best picture will earn an official full-zip hoodie from the Canadian Olympic Team's replica collection by the Hudson's Bay Company. Runners-up can win a pair of red mittens of their own.

King of the Rail drops into Whistler

The opening King of the Rail rail jam is set for Friday, Dec. 30 at the base of Whistler Mountain. Registration is from 6 p.m. to 6:45 p.m. at Showcase, followed by a rider meeting. The jam session runs from 7 p.m. to 8:30 p.m., followed by the awards — with the athletes themselves voting for the winners. The cost is $15 to enter, with a portion of the fee going to the top skier or rider in each category.

As well as cash prizes, the participants are eligible to win draw prizes from Showcase, Burton, Atomic, Nintendo, Telus, DNA and others.

The setup will be similar to last year with a few different lines and options set up for participants. There's no limit on the number of runs you can take, but you'll have to wait your turn

Helmets are mandatory and mouthguards recommended. Minors need a waiver signed by a parent or legal guardian.

Biathlon has been a soft spot for Canada in recent years, but if early results from this season are any indication it won't be soft for long. The team recently wrapped up its best weekend yet in Austria, with athletes posting personal bests individually and as a team.

The week started on Wednesday with a mixed relay event. The development level team of Melanie Shultz, Claude Godbout, Nathan Smith and Scott Gow made history at the IBU Cup level (one step down from the World Cup) with a fourth place result, placing just 31 seconds off the podium.

Brendan Green followed that up with a 24th place finish in the men's 10-kilometre sprint last Thursday in the World Cup. He struggled on his skis but was perfect at the range.

"The kicker today was it was snowing heavy for the first group of starters and then stopped so the course was a little quicker for some of the guys," he said.

It was Green's second top-30 result this season.

Nathan Smith and Scott Gow then made history by placing fourth and fifth in the IBU Cup event in the 10km sprint.

Back at the World Cup, Jean Philippe Le Guellec placed eighth, his best result of the season and his third career top 10, in the 12.5km pursuit competition.

"I've been gettng very anxious over the last few weekends and totally over analyzing everything," he said. "My motto this weekend was to just focus on skiing and shooting. I did that today and it took the pressure off. This was a great result and I'm very happy."

Squamish's Megan Imrie was 25th in the women's 10km pursuit, her best result to date.

To cap it off, the Canadian World Cup relay team placed sixth in the mixed event. The team consisted of Jean-Philippe Le Guellec, Zina Kocher, Megan Imrie and Brenan Green. They were just three seconds back of the top five and just over 30 seconds back of the podium.