Only a few members of the national team made it to the biathlon nationals at Whistler Olympic Park this week, with some athletes opting to stay home and others taking part in an event in Siberia, Russia to earn more international points.
Mar 20, 2013 9:00 PM By: Andrew Mitchell 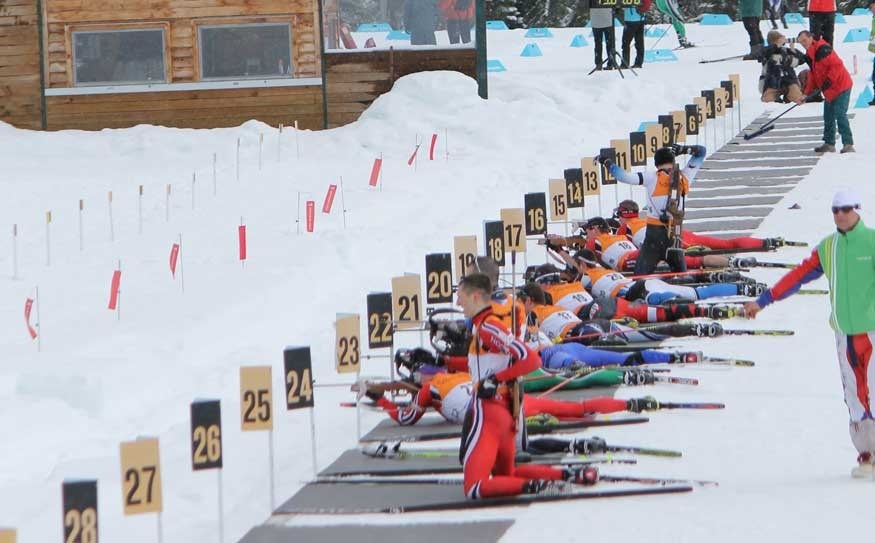 Only a few members of the national team made it to the biathlon nationals at Whistler Olympic Park this week, with some athletes opting to stay home and others taking part in an event in Siberia, Russia to earn more international points.

The Haywood Ski Nationals, the national championships for cross country from March 23 to 30, will be a different story as World Cup athletes are expected to take part. Some of the members of the national team already confirmed include Len Valjas, Perianne Jones and Dasha Gaiazova, and possibly Ivan Babikov. Alex Harvey, Devon Kershaw and Chandra Crawford have not confirmed at this point.

Locally, Whistler will be represented by several athletes at the senior and junior level including Nicki Murdoch, Lauren Doak, Jenya Nordin, Keeley Wentzel, Austin Reith, Michael Murdoch, Fraser Doak, Benita Peifer and others, plus several masters-age racers. As well, members of the Callaghan Valley Training Centre will be on hand to do battle against athletes from other national development centres across Canada.

Overlapping the Haywood Ski Nationals is the 2013 Aviva Ski Jumping and Nordic Combined Nationals. Visitors to Whistler Olympic Park can watch ski jumpers train all of next week before the opening Normal Hill and Nordic Combined competitions on Friday. The main event, the Large Hill competition takes place on Saturday, Mar. 30.

Admission to Whistler Olympic Park is free to spectators, but you must check in at the ticket booth. The schedules are subject to change, but visit www.seatoskynordicfestival.com for details.

Maltais back on podium

Quebec's Dominique Maltais added a silver medal to her collection as the snowboardcross World Cup tour shifted to Veysonnaz, Switzerland last week, bringing her total for the 2013 season to five — and her career tally to an even 30. Five medals matches her best season on the World Cup tour, and secured her the overall World Cup title for the season — her fourth career crystal globe.

Squamish's Maëlle Ricker placed 10th on the day, while Zoe Bergermann was 25th, Whistler's Carle Brenneman was 26th and Tess Critchlow was 29th.

Squamish's Rob Fagan made the final in the men's event, but finished just off the podium in fourth. Meanwhile North Vancouver's Chris Robanske was knocked out of the finals but won the small final race to place fifth on the day. Jake Holden was 28th to round out the top 30.

The event set up a snowboardcross team event, where the first athlete to the bottom opens the gate up top for the next athlete by crossing the finish line. It was a double gold day for Canada with Robanske and Fagan winning the men's event and Maltais and Ricker placing first for the women.

Whistler's Mercedes Nicoll finished on top of the Sport Chek Snow Crown event in Calgary this past weekend, earning the national title in snowboard halfpipe. She was joined on the podium by two other riders based in Sea to Sky, with Katie Tsuyuki in second and Alex Duckworth in third.

The men's competition came down to Whistler riders Derek Livingston, Brad Martin and Crispin Lipscomb, with Livingston landing a backside 900 to take the top prize. Martin placed second while Lipscomb — previously retired from the sport — stepped in to place third.

"Twice in a row, it's pretty awesome and I'm really stoked right now," he said.

The slopestyle nationals were also held and Darcy Sharpe, who trains with the Whistler Valley Snowboard Club, took the overall win with a score of 96.0. He was followed by Tyler Nicholson and Rhett Haubrich.

On the women's side, Kristy Macdonald took the win, followed by Laurie Blouin and Japanese rider Fumika Hoshino.

With the explosion of mountain biking in the province it seems like spring can't come soon enough for most riders. Enter the FrostBIKE DH at Silver Star, an on-snow downhill race that drew out 103 riders to challenge themselves on a very soft, winding course.

Whistler ski cross up-and-comers Tyler Murray and Sarah Lepine are wrapping up the NorAm Cup season on a high note with Murray winning the first race of his career and placing second on the second day of competition at Panorama Mountain Resort.

Sarah Lepine earned silver and bronze medals to round out her season.

The NorAm Cup finals are at Mount Hood this weekend with another double-header.

As well, both athletes earned spots to represent Canada at the World Juniors in Italy in two weeks time.

Whistler's Marielle Thompson, only 20 years old, will also be at that event.

The final Whistler Blackcomb Park Rider Ski and Snowboard Event of the season is a slopestyle on Blackcomb Mountain. Early registration is $29 online or at guest relations, and you can register until 9:45 a.m. at the Rendezvous Lodge on the day of the event.

The eighth and final race in the Kokanee Valley Race Series is a dual giant slalom and team relay on Blackcomb Mountain. Early registration is available for $30 online or at Whistler Blackcomb Guest Relations, or on the day of the event in the Renezvous Lodge until 9:45 a.m. for $35.

Families ski at their own pace and travel to various stations around Whistler and Blackcomb to do enjoy fun activities, treats or games. The cost is $10 for the day. Visit www.whistlerblackcomb.com.