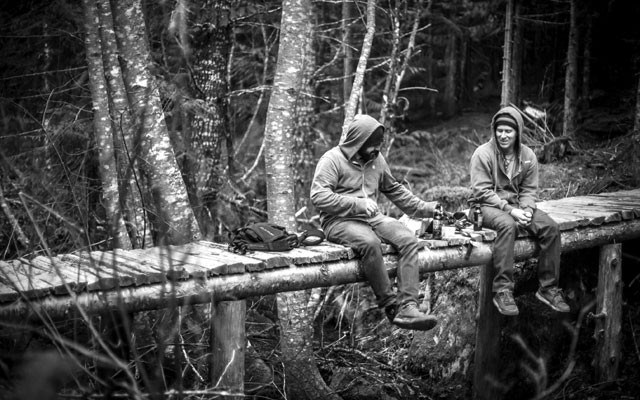 On Jan. 23, the Whistler rider took home the top prize as part of the 2016 GoPro of the World Best Line Contest III contest for his video "Trail Boik Time" shot on Salsa Verde, a trail he took the lead in constructing.

Speaking after he was announced as the winner, Storey, who entered five videos in all, expressed some surprise that "Trail Boik Time" was the one to capture voters' imaginations.

"This one, I actually almost didn't enter. The 'Roca Verde' one, I really liked because the light was really good on it, but this one, I almost didn't enter because the light was a bit spotty. It was not what I was wanting, but I never got the chance to go back in there and get it in the perfect light. It just never came around," he said. "I thought 'I'll just enter it anyways. It can't hurt. Maybe I can get it better another time for another contest,' but I'm glad I did end up entering it."

Storey said he was still in a bit of shock hours after he received word he'd received the most votes, taking about 68 per cent of the tally in the final.

"It's still kind of unbelievable because the whole contest, I was trying not to get too excited about it because you never know what's going to happen. If I got voted out, I didn't want to be too disappointed," he said. "It was kind of surprising because this round had gone on longer than the other ones, so I just tried to push it to the back of my head. When it gets announced, it gets announced. Don't try to stress over it too much.

"It was still kind of an unexpected feeling when I found out this morning (Jan. 23)."

In the final, Storey's video knocked off "Cop Killer," which was entered by Enduro World Series rider Yoann Barelli and features downhill phenom Finn Iles, both Whistler residents. The two have more social media sway, with several times more followers than Storey's roughly 3,000 supporters. But in the final, Barelli encouraged people to vote for the video they preferred instead of just seeking out his name and casting a ballot that way.

"It could have gone any way. When people are voting online, you don't know what they're liking or what they're thinking," Storey said. "Yoann is pretty incredible, though. He's such a rad guy. On his social media, he shared a picture that he had voted for me and urged people to vote what their favourite video was, not because they like him or because they follow him.

"I didn't know what to expect going up against guys with big social media followings like that."

Barelli said straight up that he preferred all aspects of Storey's entry and was thrilled to see it win.

"I think everything was better than us. He's a trail-builder and spends a lot of time preparing his video. For me, it makes sense that he won. His video was great," he said.

Entering a video in a contest was relatively new to Barelli, who had only previously let footage stand once, at a Crankworx Dirt Diaries contest. This time, he uploaded the video toward the end of October and everything took its course naturally as Barelli put it on the backburner. The video, shot near Pemberton, was named the top 10 of the month, voted into the top 16 bracket and advanced to the final four by the time he checked in again.

"Just last week, I realized we were in the semifinals," he said with a laugh. "I said to Finn 'Now we have to post a little bit and then we can make it to the finals.'"

"The main goal was to build something that looked incredible on camera because I wanted to use it to shoot video and shoot photos, all sorts of things. Another goal that was really important was to make sure that it rode super fun. I wanted to be fast, kind of technical, kind of flowy — all the things I like riding," Storey said.

Storey wouldn't reveal where the trail is located, saying only it is in Whistler, but does encourage anyone who likes the video to try to go on a hunt for it.

"It's kind of fun when you get to hunt for a trail, something that you really want to ride, and discover it on your own. It's a lot more rewarding," he said. "We're kind of in that honeymoon stage where people are out searching for it. It's not impossible to find."

All the entries are available at www.pinkbike.com/contest/gopro/entries.