Whistler’s figure skaters were able to enjoy a mostly normal season last year despite some challenges due to the pandemic.
Jul 1, 2021 9:00 AM By: Harrison Brooks 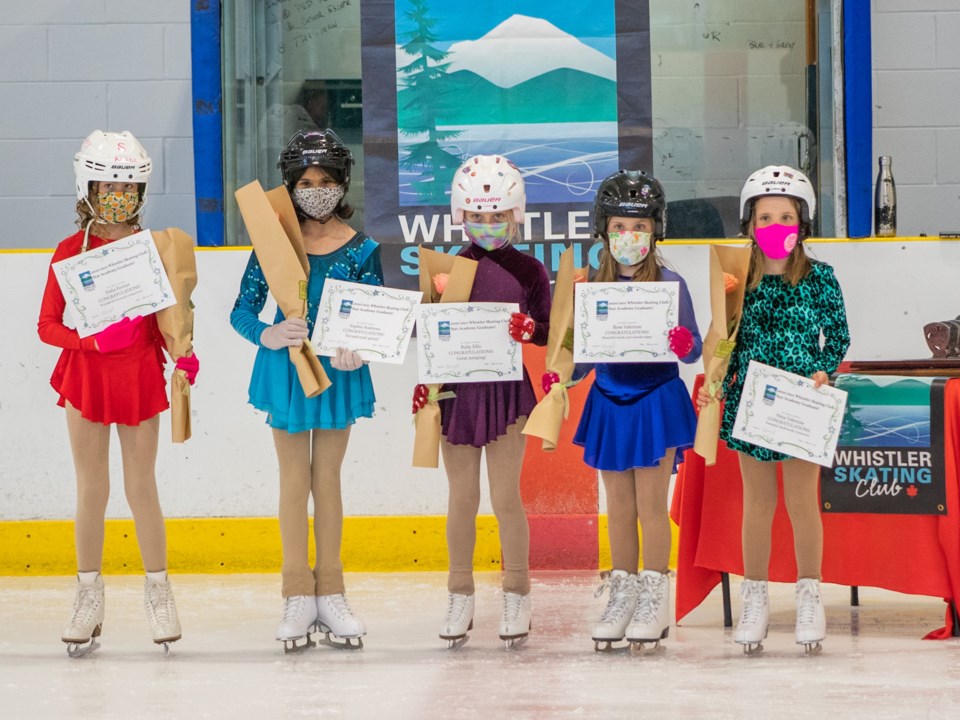 Whistler Skating Club’s star academy skaters show off with their graduation certificates at the end of the 2020/2021 skating season.Jayden Inniss

The Whistler Figure Skating Club, and Skate Canada B.C., beat the odds during the pandemic being one of the only skating organizations across Canada that was able to continue operation through most of the pandemic.

“[But] we were able to overcome these challenges with the help of our coaches and our skaters and the parents who supported the option that we got from the [RMOW] to operate through COVID.

“Through that cooperation and some really hard work on behalf of our coaching staff led by Dianne Diamond, our skaters won several awards at a virtual competition for their season end.”

The club was able to continue training its 35 competitive star academy skaters through the summer and winter, but unfortunately, wasn’t able to run its learn-to-skate programs that usually have more than 100 kids sign up—adding financial difficulties to the list of challenges.

However, despite the unusual circumstances, the club saw success with many of its skaters putting up great scores in the virtual B.C. Coast Regional Event, the season’s only competition.

“It was B.C Coast that organized it but it was provincial,” said Diamond.

“Our skaters performed in our arena under competition settings, and it was all shown over five days where you could go online and you were told what time you would be able to watch your performance, with the judges set up in their houses judging the performances.”

Unlike other sports, like gymnastics, that also moved to virtual competitions but allowed the competitors to take multiple attempts at their routine, the skating competition was as close to a live event as it could be. Skaters were given three minutes of warm-up time, then everyone would clear the ice and each skater would have one shot at performing their routine for the camera.

According to Diamond, the competition had well over 700 total skaters from across the province and was only possible due to the “amazing team” at Skate Canada B.C.

Despite the difficulties of the pandemic year, Diamond believes there were some benefits for the club in having a more sheltered and low-key season.

“I think we came together, the skaters and the coaches, we really bonded this year because of what we were going through, and we were stronger in the end, definitely as a community, and our relationships were stronger with each other so that was a definite bonus,” she said.

“It was incredible seeing it come together. And then because we weren’t allowed to do any adult skating [or] any learn-to-skate programs, our competitive skaters had so much more ice time than a normal year that they just really improved. Everybody improved right across the board.”

This summer, as the pandemic starts to clear up and restrictions begin to lift, the Whistler Skating Club is looking forward to returning to a more normal schedule that includes the same summer programs as last year, but also being able to bring back the learn-to-skate programs for all the municipality’s children who missed out on it last year.

“I think we are going to have a massive celebration the week of July 5th and you know we are going to do something with our masks … and just celebrate not having to wear a mask when we train on the ice,” said Diamond.

“But I’m also looking forward to seeing the little Can Skaters and the adult skaters participating in the club again. It’s a celebration, it’s a growing club and we are doing great stuff. We’ve got great skaters who work really hard, they train really hard and they’re motivated and passionate, so it’s exciting.

“And we have Patrick Chan coming and working with us on a regular basis … he’ll probably come out sometime in July and then again in August.”

For more information on the skating club’s summer programs and registration visit its website at whistlerskatingclub.ca.