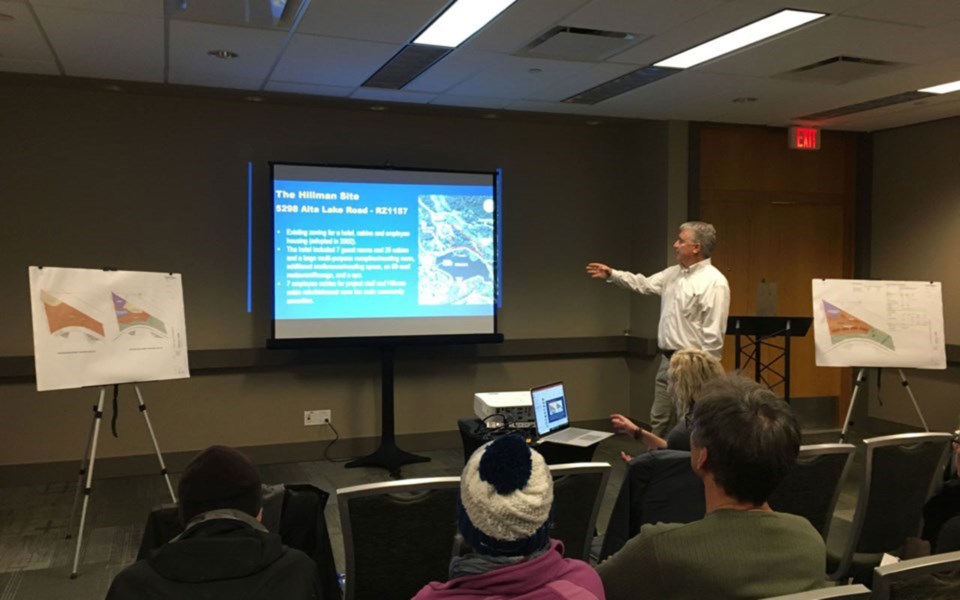 Developer Michael Hutchison presents on a housing proposal for 5298 Alta Lake Road at an open house in October 2019. A public hearing for the project is set for Feb. 23.File photo by Braden Dupuis

In an attempt to deflect accusations about conflicts of interest related to his longstanding service on Whistler’s public housing boards, Michael Hutchison downplays the nature of his involvement with the Mayor’s Task Force on Resident Housing (“Public hearing set for Alta Lake Road housing project”, Pique, Feb. 12).

His comments to Pique suggest that he was merely part of a “public consultation” and that the Resort Municipality of Whistler had solicited his expertise as a private developer.

In fact, he was invited to join the task force specifically in his capacity as chair of the Whistler Housing Authority (WHA) board. While it may be that he only attended a couple of these meetings, these were closed-door and confidential policy discussions in which he participated as head of our non-profit WHA. As noted in the article, the task force’s Code of Conduct prohibited members from engaging in transactions for personal profit that accrued from confidential information gained through their involvement.

The timeline behind the Nita Lake proposal should raise eyebrows. Mr. Hutchison resigned as chair of the WHA shortly after the Guidelines for Private Sector Employee Housing were amended by Council to permit precisely the kind of development he is now pursuing; preparations for a similar rezoning application for 5298 Alta Lake Rd. in 2018 were already underway when the original guidelines were first endorsed.

As a member of the Mayor’s Task Force and as chair of the WHA for nearly a decade, Mr. Hutchison’s engagement with our public-housing policy has been longstanding and intimate, a history of public service for which he was appropriately presented with a Civic Service Award in 2017.

For years, however, he attracted criticism that he might be acting in his own self-interest as a developer—criticisms that were repeatedly dismissed on the basis that he was never actively engaged in building employee housing. Now, however, he is seeking approval for a highly contentious (and highly profitable) rezoning that would mix massive market townhomes on the lakefront with smaller employee units at the back of the site—all based on public policy and municipal guidelines that he helped shape.

As G.D. Maxwell wrote in these pages on this very issue (Pique, Oct. 22, 2019): “I find it questionable when people seek to profit from opportunities they were involved in creating.”

We need to hold our public officials—whether elected, paid, or volunteer—to the highest ethical standards. The mayor has promised to give this rezoning proposal “a fair hearing”; I say it demands “appropriate scrutiny.”

Given the facts already available, there appears to be much more to this story, and the public deserves to be informed.

LETTER TO THE EDITOR: Are ill-informed objections for the health of the community or just self-interest?
Feb 18, 2021 7:15 AM