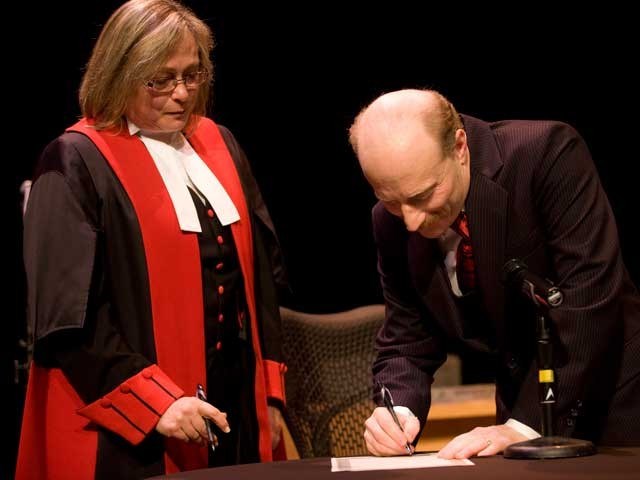 It’s official: Whistler’s council for the next three years was inducted at a ceremony at MY Millennium Place Monday. And amid the formal suits, RCMP Red Serge uniforms and festive poinsettias, returning Mayor Ken Melamed took the opportunity to speak about the challenges Whistler faces in the near future.

“We find ourselves overbuilt, fighting a reputation as being exclusive, sometimes too far from the closest airport, and against increasing competition,” warned Melamed in front of an audience of about 30 community members, including his family.

“Businesses are understaffed, lack of affordability and housing are issues for local residents, and taxes are high.”

But it was not all doom and gloom at the swearing in. The mayor also spoke highly of Whistler’s leadership role in sustainable community planning, especially against the backdrop of the 2010 Olympic and Paralympic Games.

“Although Whistler and the Games are far from sustainable, we are trying our best to move the agenda forward, to become a leader and an inspiration to others,” said Melamed.

“Success as a sustainable society is as yet undefined and elusive, but here in Whistler I believe we have an extraordinarily high level of understanding of the principles and of the strategic approach for progress.”

The ceremony kicked off with each member of the 16th Whistler council taking an oath of office, under the watch of Madam Justice Sunni S. Stromberg-Stein.

The new team includes only two incumbent councillors: Ralph Forsyth and Eckhard Zeidler. Three rookies are coming to the table — Grant Lamont, Tom Thomson and Chris Quinlan — along with Ted Milner, who served on two previous councils from 1996 to 2002.

Keith Bennett, general manager of resort experience for the municipality, took a moment during the ceremony to toast the seven men on behalf of municipal hall’s senior management and wish them luck in the three years ahead.

Recording artist Ali Milner — who is Milner’s daughter — sang an a cappella version of O Canada.

While the night wrapped up with drinks and socializing in the MY Place foyer, the work has already begun for the 2008 to 2011 council.

Melamed announced each councillor’s committee appointments, including his new position as the council representative to the Chamber of Commerce.

The next council meeting will be held Monday, Dec. 15 at 6:30 p.m. at MY Millennium Place.